Alice Oseman, author of SOLITAIRE, on writing the book you want to read

We're delighted to have Alice Oseman here to share more about her debut novel SOLITAIRE.

Alice, what was your inspiration for writing SOLITAIRE?

How exceptionally boring school was and how I desperately wanted something interesting to happen.

I don't remember there being a really hard scene to write, but I'm particularly proud of the scene where Tori comes back from Becky's party and finds Charlie in the kitchen.

The Catcher in the Rye by J.D. Salinger - that book was a huge inspiration for me and I'm told that my book comes across in the same light.

How long did you work on SOLITAIRE?

Spent at least six months planning it, then another four/five months writing it, around six months editing with my agent, then a year after that it was published in the UK!

It taught me that I was not a very academic person, like I had been led to believe, and am in fact a creative person.

What do you hope readers will take away from SOLITAIRE?

Not as long as most people's, I think! I wrote one book before Solitaire but didn't attempt to send it to agents, I didn't know how and I didn't particularly want to! I just wrote it for fun. I was very lucky to be taken on by an agent only a month or so after I queried agents.

Not really, it was more of a gradual process! I always felt fairly confident about the book, probably because I just loved it so so much.

I have absolutely no ritual whatsoever. I write if and when I feel like it. I usually need to be on my own and in silence though!

My second novel! It's a new story, not a sequel, and is another YA contemporary. In Solitaire, Alice Oseman has brought to life a vivid, clever, and heartfelt portrayal of what it's like to be a teenager today. This stunning debut novel—which the Times (London) called "The Catcher in the Rye for the digital age"—is perfect for fans of Melina Marchetta, Stephen Chbosky, and Rainbow Rowell.

My name is Tori Spring. I like to sleep and I like to blog. Last year—before all that stuff with Charlie and before I had to face the harsh realities of exams and university applications and the fact that one day I really will have to start talking to people—I had friends. Things were very different, I guess, but that's all over now. 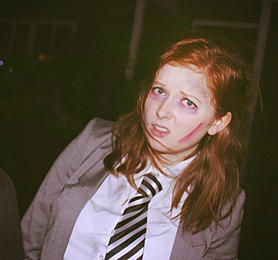 Alice Oseman was born in 1994 in Kent, England. She is studying English at Durham University, probably due to the expectation of society, but mostly spends her time obsessing over fictional characters, drawing really dumb comics, and complaining about things on her Tumblr, chronicintrovert.tumblr.com. Hopefully, she’ll avoid having to get a real job for the rest of her life. Alice wrote a book when she was seventeen. That book, SOLITAIRE, was published by HarperCollins in July 2014.