Moriah McStay, author of EVERYTHING THAT MAKES YOU, on throwing yourself into something new

We're excited to have Moriah McStay join us with her debut novel EVERYTHING THAT MAKES YOU.

Moriah, what was your inspiration for writing EVERYTHING THAT MAKES YOU?

When I was little, I was in an accident that left me blind in one eye. You can’t notice much now, but at the time it felt significant. People could tell. I got lots of questions, couldn’t play sports, had to wear big glasses. Later on—in high school and college—I began to wonder which parts of my personality that accident shaped. If it never happened, who would I be? And what about my brother and sister? My parents? How did the accident shape their lives?

I’d throw out the idea to friends, and everyone had some moment, some significant thing that changes their direction. One friend’s father died when she was young. A girl got cancer when she was ten. Someone moved and changed schools in twelfth grade. I had a boyfriend that wasn’t great for me—we dated almost two years. What other choices might I have made in that same time span?

There are so many “what ifs”--we all have them. I thought it would be an interesting question to explore.

I could talk books for days. I wouldn’t dare put myself in the same category as these writers, but I love Hilary Smith’s WILD AWAKE, Jandy’s Nelson’s I’LL GIVE YOU THE SUN & THE SKY IS EVERYWHERE. I’m a big fan of Gayle Forman, Maggie Stiefvater, Laurie Halse Anderson and e. lockhart. Readers can’t go wrong there!

How long did you work on EVERYTHING THAT MAKES YOU?

I sat on the idea for fifteen years. When I finally started drafting, it took about a year before I had a draft to submit to agents. My agent Steven Chudney didn’t ask for significant changes, so it was submitted to editors pretty much as-is. It took about four months between signing my agent’s contract and signing my editor's.

I wrote two, terrible novels before ETMY, both of which I thought were amazing and submitted to agents. Though I cringe that I ever let people read them, the process was critical. I learned necessary lessons, and I’m a better writer for it. Sometimes I go back to those earlier ideas, when I’m working on setting or character.

The submission process is a long one, so I started new projects while waiting to hear from agents. I did the same while submitting ETMY, and that bare-bones effort was the spring board for my second novel, which I’m revising now.

I have a home office now, but I didn’t while writing ETMY. Most of that was written at a coffee shop—Otherlands, which is featured in the book. Now, I mainly write at home,  either on my treadmill desk, standing at the kitchen counter, or sitting on the floor. Music is always blaring.

Going back to my comments on submission, I’d say the "Keep Writing" coping mechanism was the most helpful for me. While you’re waiting to hear from agents or editors on your current manuscript, throw yourself into something new. Not only will it keep you too busy to refresh your inbox 80 million times a day, but if bad news comes in, you’ll be excited and focused on a new project. It helps takes out some of the sting.

I’m revising my second book for Katherine Tegen. It’s been a long road, but I’m pleased with the direction the book’s taken. I’m not sure when it’ll release, but it will be another standalone, contemporary YA. One girl. Two stories. Meet Fiona Doyle. The thick ridges of scar tissue on her face are from an accident twelve years ago. Fiona has notebooks full of songs she’s written about her frustrations, her dreams, and about her massive crush on beautiful uber-jock Trent McKinnon. If she can’t even find the courage to look Trent straight in his beautiful blue eyes, she sure isn’t brave enough to play or sing any of her songs in public. But something’s changing in Fiona. She can’t be defined by her scars anymore.

And what if there hadn’t been an accident? Meet Fi Doyle. Fi is the top-rated female high school lacrosse player in the state, heading straight to Northwestern on a full ride. She’s got more important things to deal with than her best friend Trent McKinnon, who’s been different ever since the kiss. When her luck goes south, even lacrosse can’t define her anymore. When you’ve always been the best at something, one dumb move can screw everything up. Can Fi fight back?

Hasn’t everyone wondered what if? In this daring debut novel, Moriah McStay gives us the rare opportunity to see what might have happened if things were different. Maybe luck determines our paths. But maybe it’s who we are that determines our luck. 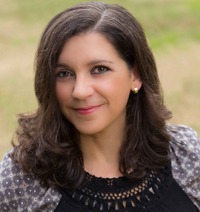 Moriah McStay grew up in Memphis, TN, where she acquired a come-and-go drawl and a lifelong love of cowboy boots and fried pickles. She attended Northwestern University and the University of Chicago. Two graduate degrees and seven jobs later, she finally figured out what she wants to be when she grows up. EVERYTHING THAT MAKES YOU is her first novel, and she's probably at home right now working on another one.
Jocelyn Rish at 6:00 AM