Happy Monday, everyone! We've got two beautiful new books to give away this week -- and they're both signed. There are also more great books releasing. So jump in, read the wonderful descriptions, enjoy the fantastic covers, and enter to win. 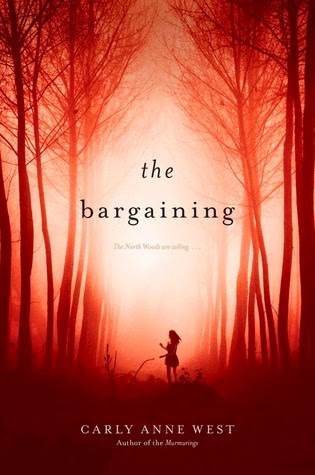 The fact that neither of her parents wants to deal with her is nothing new to Penny. She’s used to being discussed like a problem, a problem her mother has finally passed on to her father. What she hasn’t gotten used to is her stepmother…especially when she finds out that she’ll have to spend the summer with April in the remote woods of Washington to restore a broken-down old house.

Set deep in a dense forest, the old Carver House is filled with abandoned antique furniture, rich architectural details, and its own chilling past. The only respite Penny can find away from April’s renovations is in Miller, the young guy who runs the local general store. He’s her only chance at a normal, and enjoyable, summer.

But Miller has his own connection to the Carver House, and it’s one that goes beyond the mysterious tapping Penny hears at her window, the handprints she finds smudging the glass panes, and the visions of children who beckon Penny to follow them into the dark woods. Miller’s past just might threaten to become the terror of Penny’s future….

Author Question: What is your favorite thing about The Bargaining?

For this novel, I tried very hard to create a contemporary novel set in horror. I actually always try to do that, as literary horror is without question one of my favorite genres. In THE BARGAINING, I wanted to layer Penny's emotional journey in with the frightening setting in which she finds herself for the summer. I felt that her struggle was inextricably linked to the struggles faced by the inhabitants of Point Finney and the North Woods, which means at times, we don't know if Penny is manufacturing the evil, or if the evil really exists. It makes for a novel that's difficult to call horror or contemporary or gothic or psychological thriller, but I'm comfortable with that discomfort. I hope readers are, too. Juliet Newman has it all. A picture-perfect family; a handsome, loving boyfriend; and a foolproof life plan: ace her SATs, get accepted into Harvard early decision, and live happily ever after.

But when her dad moves out and her mom loses it, Juliet begins questioning the rules she’s always lived by. And to make everything even more complicated there’s Declan, the gorgeous boy who makes her feel alive and spontaneous—and who’s totally off-limits. Torn between the life she always thought she wanted and one she never knew was possible, Juliet begins to wonder: What if perfect isn't all it’s cracked up to be?

Melissa Kantor once again delivers a tale that is equal parts surprising, humorous, heartbreaking, and romantic. Powerful and honest, Juliet’s story brilliantly portrays the highs and lows of life in high school and will resonate with any reader who has experienced either.

Author Question: What is your favorite thing about Better Than Perfect?

My favorite thing about Better Than Perfect is that the narrator is far (very far) from perfect. She makes a number of stupid decisions and dumb mistakes. These mistakes are painful (for her and for people around her), but they're part of a major change in how she sees the world, and in the end, she's better for having made them. I don't think I would have had the courage to do some of the things she does, and I enjoyed living vicariously through her. Inspired by the true story of a teen who was killed at a railway crossing, the author weaves the tale of fourteen-year-old Paige, who, taking a shortcut alongside the tracks to avoid the school bullies, is tragically hit by a train and transported to a surreal world where she encounters Kim, who died seven years before. Convinced she is only dreaming, Paige must discover a way to return to her former life. Poignant, gripping, and full of unexpected twists and turns, Best Friends through Eternity will resonate with readers who have struggled with cultural identity, a sense of belonging, and the real meaning of home.

Author Question: What is your favorite thing about Best Friends through Eternity?

One of my favourite aspects of BEST FRIENDS THROUGH ETERNITY is the subplot about secondary character Jasmine which tackles a situation I had growing up as the child of immigrants; that is fitting into a new culture with parents who insist you adhere to their former country’s traditions. Jasmine is not allowed dating. Period. At some point, which will be decided by her parents, a suitable man from India will be selected for her and she will be expected to marry him. My European parents did not allow me to date, although arranged marriages were not an issue, and they expected me to help out with cooking and cleaning more than any of my friends had to do in their homes. Jasmine must help in the kitchen and learn how to make various Indian dishes when, really, she wants to become a microbiologist and find cures to diseases. Not marry. Outlandishly wealthy Grandmother VanDemere has decided to leave her vast fortune to the family member who proves him or herself worthiest-by solving puzzles and riddles on a whirlwind race around the globe, from the mines of Venezuela to the castles of Scotland. There will be eight competitors, three continents . . . and a prize worth millions.

Seventeen-year-old Avery is the black sheep of the VanDemere clan, the ostracized illegitimate daughter. Finally, she has a chance to prove herself . . . and to discover the truth about her long-lost mother.

Marshall might be Avery's uncle, but there's no love lost between the two of them. He's her main competition, and he'll do anything to win-including betray his own children.

Riley is the handsome son of Grandmother VanDemere's lawyer. As the game progresses, Avery falls hard for Riley. Suddenly, losing the game might mean losing him, too.

As the competition takes treacherous turns, it becomes clear there can only be one victor. Who can Avery truly trust? And is winning worth her life?

Author Question: What is your favorite thing about Inherit Midnight?

I think one of the things I like best about this story is how Avery, the main character, learns to face her fears. For one thing, she’s afraid of heights but makes herself climb down the side of the boarding school where she’s been stuck, and later she even rappels into a deep cave. She’s also grown up being intimidated by her bullying cousins and other wealthy relatives, but over time she learns to stand up to them. I loved seeing that process develop. 
Winner: Karen Stern
promposal (n.)--an often public proposal, in which one person asks another to the prom, eliciting joy or mortification.

Camilla can't help hoping her secret crush, Benjamin, might randomly surprise her out of the blue with a promposal. However, when she's asked to prom by an irritating casual acquaintance--wearing a fancy tux and standing in front of a news crew--she's forced to say yes. Yet all hope's not lost. A timely school project gives Camilla a chance to get closer to Benjamin...and it seems like the chemistry between them is crackling. But is she reading into something that isn't there?

Joshua, Camilla's bestie, has been secretly in love with his gay best friend, Ethan, since middle school. Just as he decides to bite the bullet and ask Ethan if he'll go to prom with him, even if just as friends, he gets a shocking surprise: Ethan asks Joshua for help crafting the perfect promposal--for another guy. Now Joshua has to suppress his love and try to fake enthusiasm as he watches his dreams fall apart...unless he can make Ethan see that love has been right in front of his eyes the whole time.

The road to the perfect promposal isn't easy to navigate. But one thing's certain--prom season is going to be memorable. Jack Bell has an unusual gift—or curse, depending on your point of view. And he’s not the only one. In Utopia, Iowa, anything can happen.

For the most part, aspiring screenwriter Jack Bell is just your typical Midwestern kid. He’s got a crush on his hot best friend, Ash. He’s coping with a sudden frostiness between his once crazy-in-love parents. He’s debating where to go to college next year—or whether to go at all. But then there’s his gift (or curse): Jack can see dead people, just like the kid in The Sixth Sense. Lately, the ghosts are more distracting than usual, demanding that Jack get to the bottom of their mysterious deaths—all while avoiding the straitlaced Detective Bloodsmith, who doesn’t believe in gifts or curses and can’t help wondering why Jack keeps turning up at crime scenes. Is there a happily-ever-after in Jack’s future, or is that only the stuff of movies?

Author Question: What is your favorite thing about Utopia, Iowa?

I'm pretty happy about the mix of genres: urban fantasy (the small-town variety), paranormal, mystery, and even a bit of romance. But my favorite thing is the town itself, the setting of the novel. Utopia, Iowa has a lot of strange people living there (well, some living anyway) and a lot of things that are stranger than people. I like the quirky characters of the town and its secrets and how these two end up being essential to the plot. Sophomore Hallie Calhoun has just endured the most excruciating six months of her life. Once the rumors about her and the preacher's son, Luke, made their way around school, her friends abandoned her, and Hallie has completely withdrawn.

Now, on a hike in the Smoky Mountains with the same people who have relentlessly taunted her, Hallie is pushed to her limit. Then Hallie, outgoing newcomer Rachel, and Jonah—Hallie's former friend—get separated from the rest of the group. As days go by without rescue, their struggle for survival turns deadly. Stranded in the wilderness, the three have no choice but to trust one another in order to stay alive . . . and for Hallie, that means opening up about what really happened that night with Luke.

From the catty atmosphere of high school to the unpredictable terrain of the mountains, this novel is a poignant, raw journey about finding yourself after having been lost for so long.