Reading and Interpreting Reviews and a Reader Appreciation Giveaway Blitz

I just read a post by Jody Hedlund about coping with reviews, and I was struck by a couple of things that she said.
Having just gone through this with an author friend who is getting her first reviews, and having dealt with my share of stinging reviews as well--ALL authors get them--I've given this some thought.

My conclusions? (And yes, I'm going to share them, even though talking about reviews in public is scary as hell.)

Reviews Can Force You to Examine Your Writing Choices

I wrote a guest post for one of my favorite writing sites yesterday (it will be out soon!) and I mentioned that one of the things that makes me grateful for editorial feedback is that it forces me to understand the choices that I make in my books.

I wrote about my main character, Barrie, because I want a dialogue about strength. About bravery. About women and our roles in society. (My theme song for Barrie--for all girls--is "Truly Brave," the collaboration between Sara Bareilles and Cyndi Lauper, which is an incredible anthem for women and artists and victims and anyone who struggles. Barrie is so lost at the beginning of the trilogy. But it's a trilogy, and she's got a huge arc. Her "brave" is big. And although there are people who don't love Barrie, there are many more people who do love her and "get" her.

Reviews Tell Us Whether We've Done Our Job As Authors

Just today, right after I started this post, a reader Tweeted a post about Compulsion, and I stopped over to see if I could use it as an example. It happened to talk about the fact that the blogger is a tutor and that she's "had some intense talks [with her students] about Barrie as a female protagonist."

As a writer, I can ask no more than that. And I wouldn't have known that I had made that connection unless I read that review or the many letters I get privately from girls and women who have made similar points.

Getting that affirmation isn't about vanity. It's about making sure I'm doing the job that I set out to do and finding out what else those readers need. Reader reviews are like a giant focus group. They're gold for writers--provided the writer is able to set aside the occasional "ouch" factor that's involved.

Reviews Are Not Always About the Book

Obviously, not every book is going to be for every reader. I've been very fortunate with Compulsion, and I'll admit I've stopped stalking my reviews the way that I did when they first started coming. It took me a long time to get "zen" about reviews, or to be able to laugh about some of them. Some of them still make for very brittle laughter.

Even people who review because they love books and want to share great books with others won't love every book. A reader brings her own life and life experience into each book she reads. That's the magic of reading.

As a writer, finding out what a reader brought to my book is one of the greatest and most unexpected joys I've experienced since being published. Whether it's about my book or someone else's story, I appreciate knowing why a plot or character does or doesn't work for someone. Negative reviews can be good reading. I enjoy a well-phrased bit of sarcasm, a bit of political-correctness policing, a bit of humor--until it crosses the line and becomes bullying.

As with the Kathleen Hale scandal, reviewers can become extreme with bashing a book, and that can drive authors crazy and destroy books that took a lot of time and resources to bring to market. There are various reasons that happens. In some cases, there's truly a problem in the book. But all too frequently, it's because a book hits a trigger and the reviewer stops being rational or even considering whether the book is making a point about the very thing that the reviewer abhors. Character arcs exist for a reason--characters learn as they go, but sometimes they have to begin in places that some people don't like in order to get to a better place.

Reviews Are Not Always Fair

If someone abandons the book and then writes about it, as may have been the case with the Kathleen Hale scandal, they're not getting the whole picture. And that's okay, too--as long they make that clear in the review. I'm all about free speech. My family and I came to this country because it was a place where we could speak our minds, and I would defend that right to my dying breath.

But I'm also an advocate for justice. I would prefer that the world of reviewing was perfect, and that if a reviewer didn't finish a book, or only skimmed it and assumed that gave them the same interpretation as a full and careful reading, that they would mention that in their review. I would prefer that if someone reviews YA books from an adult perspective and dings the characters for making teen choices, they not write up a one-star review. I would prefer fairness from all reviewers, for every book, for every author, but I still defend every reviewer's, and every author's, right to write whatever they damn well want.


Reviews Need To Be Viewed in Context

Jody Hedlund mentions that reviews are open, honest feedback. That's not always true, unfortunately. There are as many different reasons that reviewers write reviews as there are reasons why authors penned the books they have written.

If, as authors, we are going to read reviews, then I think that we need to learn to recognize the type of review, the type of reviewer, and take what we can from the feedback. The LAST thing that we should do is argue with a reviewer who provides an honest and genuine review. The last thing we should EVER do -- no matter what the review says or why the review was written -- is bully the reviewer or stalk the reviewer. Even if the reviewer bullies you, you can't respond by engaging in even worse behavior.

I chaired an advisory council on school safety for the second largest school district in Virginia for many years. In that capacity, I focused on bringing anti-bullying programs into the schools and creating safer school environments. I recognize bullying when I see it. And I am seeing it online. Fortunately, I've not really been a victim myself, and I'm probably making myself a target by writing this. That's unfortunate, but here goes anyway.

It worries me to hear authors and bloggers -- even huge authors and huge bloggers -- say privately that they do not feel that they can speak freely in defense of the victims of online bullying. Let me clarify here. I am not speaking about defending stalking or bad behavior, as in the case of Kathleen Hale. I'm saying that over and over again, I see female authors treated differently than male authors, and I see female authors get bullied in a way that makes me feel like I am back in middle school. On the flip side, there are reviewers who write perfectly innocent and reasonable reviews who are flamed by authors who don't realize their book isn't perfect. There's a cult of extreme behavior going around the internet that makes me want to cry.

Take What You Can From Reviews and Move On

As authors, I believe we have a responsibility to our readers. For that reason, I do think that reviews are helpful. The vast majority of reviewers are responsible, lovely, incredible people who review books because they love books and want to share that love with others.

I Have WONDERFUL Readers

I am so grateful that I have the readers I have. Compulsion has gotten such wonderful support--more than I ever dreamed--and I have met so many incredible readers along this journey that I am truly, truly overwhelmed. Not all of my reviews have been favorable. Duh. But my favorite reviews aren't always five star, or even four star reviews.

My favorite reviews are the ones that are honest. That make me think. That make me grow as a reader and as an author. There have been many of those.

And I thank everyone who has taken the time to read Compulsion and think about it. I thank you for your letters, and emails, and messages, and reviews, and tweets, and support.

Which brings me to this week's giveaway!

You'll find this giveaway on a lot of sites this week, and if you'd like to share it on your site, please email me at ayaplit (at) gmail dot com. I'd love to spread the word. The cover reveal for Persuasion will be next week. Next week! Yikes. And for anyone who would like a good deal on Compulsion, this is the final week it is available for Kindle, Nook, and iBooks for $1.99! 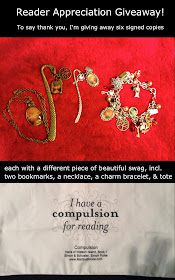