Patricia Dunn, author of REBELS BY ACCIDENT, on how her son inspired her

What was your inspiration for writing REBELS BY ACCIDENT?

My inspiration came on many levels, some of it very subconscious, and was only discovered through the practice of writing. However, my main inspiration for starting the book, of which I was all too conscious, was my son, Ali, who had no problem speaking up for himself when one day on the school bus he was called “Bin Laden’s son,” hit on the head, and told to go back to where he came from (even though this was the same New York suburb where he was born.) However, there are many kids, like Ali, and like the central character Mariam, who struggle with their cultural identities and often try to hide from the world. I wrote a story about how an Egyptian-American teen living in our post 9-11 world, and disconnected from her culture, figures out what it means to be Egyptian and American. I was compelled to finish writing Rebels by Accident during the Arab Spring, when the youth of Egypt took to the streets in protest of the thirty years of repression and censorship under the Mubarak regime. However, my main inspiration for starting the book was my son who, like Mariam, is an American-Egyptian-Muslim who had been bullied by other kids.

The scene where the character Hassan talks about his experience of being tortured was one of the last scenes I wrote, and I have to say it was difficult. I had to do a lot of research, reading testimonials from people who described their experiences when they were arrested and tortured by the Egyptian police. It was hard to read the brutal and vivid accounts without crying. I often had to walk away from the scene for a few days. Also, I knew Hassan wouldn’t talk about himself directly, so I had to write the scene as if he was describing what may have happened to Muhammad, but then we realize he’s talking about himself.

How long did you work on REBELS BY ACCIDENT?

The book went in many different directions before becoming Rebels By Accident. The first incarnation was called Misidentified Persons and it focused more on the impact that 9-11 had on an Egyptian/Muslim American family at the time of 9-11. After many years and lots of revisions, the book became what it is today. Mariam’s voice was the one constant throughout. All in all, it took 5 years.

I learned that the teenager in me is still alive and well. Actually, I love writing in the young adult voice, which was a surprise. It also taught me that, when a character starts talking to you, listen. It’s a waste of your time not to.

I also learned that all the answers to what needs to happen in a book in terms of plot or character or anything, are in your first draft. You just need to pay attention to what is written, or have readers you trust help you to see what’s there. This can’t happen until there is a complete draft, so now I work through the first draft faster, knowing that revision is where I can make the story really come alive. That’s the goal anyway. BASICALLY, KEEP WRITING UNTIL YOU GET TO THE END AND THEN GO BACK AND MAKE MAGIC.

What do you hope readers will take away from REBELS BY ACCIDENT?

It’s not always easy to embrace who we are and where we come from, but there is no shame in being on the outside. Those of us who are on the outside of things are the ones with perspective that can change the world. Yes, you can change the world. You matter and your actions do make a difference. So, try and love yourself and find friends who love you for who you are. Don’t ever let anyone try to change you into what they want you to be. Don’t let the bullies win. Really, bullies are just sad people who hurt others because they don’t know how to heal.

I think the AHA moment happened when I turned on the news and saw the people in Tahrir Square. I had a version of the book written, but I knew something was missing: an event that would really show the struggle of the youth in Egypt. These students had been using Facebook to organize for years before the revolution took place and I had that in the book, but there was still something that wasn’t working. I joke and say that the Egyptian people had a revolution so I could write this book. The fact is that the book wasn’t complete until the Arab Spring, when I said “AHA that’s it!” I rewrote the whole book around those early days in Tahrir Square.

It changes. When I’m writing a first draft I like to write in public places, like a Starbucks or Cosi or some other place where I can get lots of coffee, an internet connection, and stay for hours. If I’m home, everything else becames a matter of urgency. I start moving the refrigerator because I must clean behind it. When I’m revising I need quiet. I also need to feel relaxed or I will start to change things that don’t need to be changed. So, I will sit on the couch in my office/guest room, or I will hole up in bed like Mindy Kaling (one of my heroes) says she does when she’s writing. Her book, Is Everyone Hanging Out Without Me? (And Other Concerns) is great, by the way. A laugh a sentence.

RUN. Or walk away, fast. Seriously, I’d tell them what I tell all of my students. Writing a book has its wonderful and fulfilling moments, but it’s a long hard road, with more potholes than the 59th Street Bridge after a long, harsh winter. It’s a painful process and it can really suck a lot of the time, and there isn’t always a lot of payoff. With all that said, why do I do it?

I don’t have a choice. Most writers don’t. If you are one of those writers, you can’t walk away, because a story or stories haunt you until you write them down; you see the world in a way that compels you to put words on the page, and if it’s more excruciating not to write than it is to write, well then, just know you don’t have to do this alone. Find yourself a writer’s group, and not just a group that critiques your work, but a group or another person that understands your struggle because they struggle too. You want people to get your work, but you also want them to get you. And when you’ve just received that umpteenth rejection email and you swear that you’re not going to write another word, they will nod and say, okay.They will give you a day or two to mourn the loss, and then they will come into your room and throw you out of bed and say, “let’s write.”

I’m in the process now of revising my next book which is a sci-fi novel for young adults set within a dystopian world of parallel opposites, sort of Alice’s Adventures In Wonderland meets The Hunger Games. The journey takes sixteen year old Begonia from her safe, happy, secure world, through the dark, gloomy, other world of secrets and disillusion, on a quest for the truth and ultimate healing. Like in Rebels by Accident, there are strong teen female characters and a very strong grandmother (only unlike Sittu, this grandmother is a little twisted.) 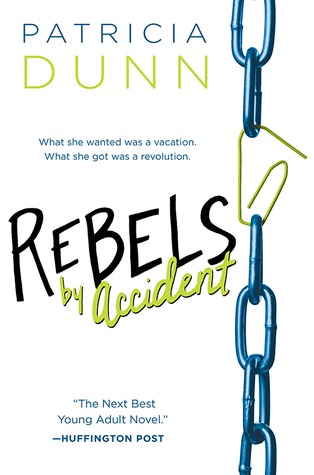 What she wanted was a vacation. What she got was a revolution.

After attending her first high school party lands her in jail, Mariam thinks things can't possibly get worse. So when her parents send her to live with her grandmother in Cairo, she is sure her life is over. Her Sittu is Darth Vader's evil sister, and Mariam is convinced that the only sights she'll get to see in Egypt are the rooms in her grandmother's apartment.

Then a girl named Asmaa calls the people of Egypt to protest against their president, and Mariam finds herself in the middle of a revolution, running from teargas and falling in love for the first time, and having her first kiss.

Patricia was the managing editor of Muslimwakeup.com, America's most popular Muslim online magazine from 2003-2008. She has an MFA in creative writing from Sarah Lawrence College where she also teaches. Her writing has appeared in Global City Review - where she edited the post-9-11 International Issue - Salon.com, Women's eNews, The Christian Science Monitor, The Village Voice, The Nation, and L.A. Weekly, among other publications.
Adventures in YA Publishing at 6:00 AM