Craft of Writing: Selling on Proposal, aka The Dreaded Synopsis by Gretchen McNeil

We are thrilled to welcome Gretchen McNeil to the blog today.  Gretchen is a woman of many talents being an opera singer and clown (what a lovely combination!) as well as an award-winning writer.  She's had novels optioned by Hollywood and has sold rights internationally.  And she's here to share with us today why the dreaded synopsis can actually be the professional writer's best friend!

Selling on Proposal, aka The Dreaded Synopsis by Gretchen McNeil


Of my seven contracted books, all but one – my debut Possess – have sold on proposal. Some were sold from a synopsis plus fifty or so pages, some were just from a synopsis. But notice the common thread...

Selling a novel on proposal was, for me, the ultimate writing goal. “You mean I don’t have to write the entire book first? You mean I can finish the book knowing it already has a home (and a paycheck) lined up? Sign me up!”

It’s a double-edged sword, of course. While you’ve managed to charm an editor and publisher with your synopsis and/or pages, you still have to deliver a final manuscript on or before a due date, and the pressure of scheduling your creativity can be crippling.

But I’m not here to talk about that part. I’m here to address that dreaded “S” word – the synopsis.

Like it or not, this is something that almost every author – published or unpublished – is going to have to deal with until the end of time. Synopsizing a completed novel is hard enough, but crafting one for a book you haven’t written yet? How is that possible?

(I can actually hear you pantsers in the audience screaming out in abject terror. Don’t worry, hopefully this will be painless.)

I think the key for me in writing a proposal synopsis is remembering its purpose: it’s meant to be marketing material, a sales pitch to hook your audience. It’s not necessarily a roadmap for your finished manuscript, which I think is where a lot of people get hung up. Think of it like an elongated query letter as opposed to an intricate blow-by-blow of the book. There are certain important points you want to hit, while the details can be left for later.

What are those important points? For me, I aim to answer the following questions:


The answer to Question #1 usually resides in the part of the book most people refer to as “the backstory” – elements that come out during the action, but aren’t necessarily enumerated at the beginning of the book. In a manuscript, that’s awesome. In a synopsis – which doesn’t have a lot of action – that’s problematic. But since this synopsis is a pitch, feel free to front load a paragraph or two of backstory to establish your character. It’s important to hook your target audience with this right off the bat.

Next you move into the First Act of your book (if you’re a proponent of Save the Cat! beat sheets, you know of what I speak): basically establishing your supporting cast and your setting, and explaining the conflict, i.e. Questions #2 and #5. What does your character want? What’s at stake if she fails? Establishing this last question up front is important because it sets the stakes immediately which, hopefully, gives an editor the desire to keep reading.

So far, so good. And notice we haven’t had to really dive into much of the action of this book yet?

Unfortunately, that’s about to change. Questions #3 and #4 are basically the impetuses (impeti?) for action in your novel, the answers that force your main character to make a decision and go on his/her journey. The bad news is that this does require some sense of what actually happens in the novel, which is a scary concept since you haven’t actually written it yet. The good news is that all you really need to aim for are tentpoles: Event A! Disaster B! Turnaround C! Yes, this does require gazing into the crystal ball and trying to see the finished product, but it also allows for some leeway when you actually write the book. The specifics of the tentpoles can change, as long as, structurally, they still exist.

Last but not least, the climax. I think this is the scariest part of writing a proposal synopsis because so much of the ending of a book relies on what happens in the middle…which hasn’t been written yet. So how do you tackle the dénouement?

I tend to dance around it a little bit, reestablishing the stakes and the difficult decision the hero is going to need to make in order to get what he/she wants, and then telling the reader exactly what the result of the climax will be. Not exactly what the climax will be, but the result of it. For example, “Refusing to play by the rules, Katniss is able to beat the Capitol at their own game.”

Notice I didn’t tell you how. Or that Peeta was involved. Just showed the outcome while teasing what may or may not happen in the climax. That’s how I get around, er, not really knowing what’s going to happen when I’m writing a proposal synopsis.

So there it is. It’s not particularly detailed but it’s a blueprint for the book I’m going to write, hopefully with enough voice and tone and plot and promise that an editor will love it. Just remember, “synopsis” isn’t a four-letter word. In the end, it can be your best friend. 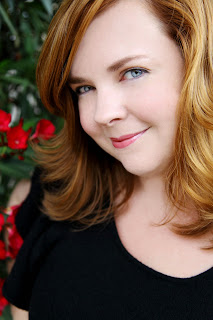 Author of YA horror novels POSSESS, TEN, and 3:59, as well as the new mystery/suspense series Don't Get Mad, beginning in 2014 with GET EVEN and continuing in 2015 with GET DIRTY, all with Balzer + Bray for HarperCollins. Gretchen also contributed an essay to the Dear Teen Me anthology from Zest Books.

Gretchen is a former coloratura soprano, the voice of Mary on G4's Code Monkeys, and she sings with the LA-based circus troupe Cirque Berzerk. She is repped by Ginger Clark of Curtis Brown, Ltd. 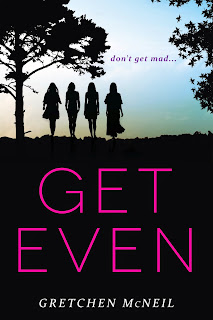 The Breakfast Club meets Pretty Little Liars in Gretchen McNeil’s witty and suspenseful novel about four disparate girls who join forces to take revenge on high school bullies and create dangerous enemies for themselves in the process.

Bree, Olivia, Kitty, and Margot have nothing in common—at least that’s what they’d like the students and administrators of their elite private school to think. The girls have different goals, different friends, and different lives, but they share one very big secret: They’re all members of Don’t Get Mad, a secret society that anonymously takes revenge on the school’s bullies, mean girls, and tyrannical teachers.

When their latest target ends up dead with a blood-soaked “DGM” card in his hands, the girls realize that they’re not as anonymous as they thought—and that someone now wants revenge on them. Soon the clues are piling up, the police are closing in . . . and everyone has something to lose.