Craft of Writing: Positive Reading Challenge by Holly Schindler Plus a GIVEAWAY!

Holly Schindler's third YA novel is being compared to The Lovely Bones, and in my opinion, that is amazing. Chilling, creepy and psychologically terrifying are words that come to mind when I hear that title, and reviews of FERAL are living up to and surpassing that.


I’m not going to lie—I don’t think my writing degree did much for me, in terms of preparing me to become a professional writer. That’s not to discourage anyone currently enrolled in a writing program. I’m only speaking specifically of the writing program I attended in the late ‘90s / early ‘00s. In fact, many of the “truths” that were taught in my creative writing courses did me a disservice—I had to spend a few years unlearning the lessons that had filled my classrooms.

The one lesson that I’m grateful for—the one lesson that actually did help me—came from a literature professor, rather than a writing professor. In fact, he was by far my favorite professor in the entire department.
I met this particular professor when I signed up for his course in Literary Criticism. The class was a real struggle for me, in the beginning—so much so, I wound up seeking this professor out to try to gain some perspective, some insight into how to better attack the subject matter.

The advice this professor gave me was to forget “good.” It wasn’t my job to determine whether or not a book, poem, story, etc. was worth reading. Other people with far better credentials had, in fact, already determined the work was “good.” It had made its way into the literary canon. It was a classic. My job, as a literature student, was to figure out why. What separated this work from its contemporaries? Why did it survive while others produced in the same vein were forgotten?

When I graduated and was up to my eyeballs in rejections, I returned to that lesson. I checked out piles and piles of contemporary juvenile literature from my local library and attacked each book in the same way I’d once attacked the works I’d read for my literature professor. I went at it thinking, “Okay, somebody—an agent, an editor, a publishing house—has already decided this book is good. Why? What does this book have that made it a work to be acquired? What are this author’s strengths?”

That lesson, more than any other, helped me move toward publication. And I’d like to encourage anyone in pursuit of publication to do the same. For one year, I challenge you to find something good in each new book you read.
It’s easy, when you’re covered in rejection, to fall into a pattern of negative thinking. That negative thinking could be projected inward (“I’m no good. I’ll never be in the company of published authors. I don’t have anything new to offer. Who would read my work when so many other great authors are already out there?”) Or, the negative thinking could be projected outward (“Published books are crap. These published authors are no good. My work is better than this. The reason my work isn’t being accepted is because editors only want crap.”)
Another negative thought pre-published authors fall into is the idea that a rejection means that the editor or agent is telling you that your work isn’t of high enough quality. That’s not it at all. Yet again, I encourage you to forget “good.” A rejection isn’t an editor telling you that you’re not good enough. In fact, I once worked with an editor who told me that she picked books that she felt she could edit in a way no one else could…she picked books she felt she could make a unique kind of editorial thumbprint on. She said she did pass on many books that were well done—it was about finding the right match.

For one year, then, I encourage any would-be authors to ditch the negative thinking—which can really affect your writing, hamper it. Let go of the idea that a rejection is a way to tell you that you’re not good enough. Let go of the idea that you don’t measure up. And while you should always, always, always have faith and pride in your abilities, let go of the notion that the published books you check out are somehow inferior. Decide, every time you pick up a book, that you’re going to learn from it.

For one year, forget good. Look at each read objectively and ask yourself, “Why did this one make it?” You may decide that it was because of the concept, or because of the writer’s ability to handle a plot twist, or because of the author’s voice. You may see value in their character development or humor. Find some positive reason for the book being acquired.

Then challenge yourself. Figure out how to incorporate other authors’ admirable qualities into your work in your own way. I contend it’s far more useful to try to emulate something positive than it is to avoid something negative.

I would bet that by the end of the year, you will have made progress in some way. You’ll have graduated from form rejections to personalized rejections—or maybe even signed with an agent. I would, in fact, love to hear your own stories of how this “Positive Reading Challenge” helped your own publication pursuit. Take the challenge, and at the end of the year, shoot me a message. (I can always be reached through my website or social media). I’d love to know how it impacted you.

I’m grateful every day for my prof’s lesson—it helped me in ways I never could have anticipated, back when I was a literature student trying to navigate through his class. It actually turned out to be the best professional advice I ever received. I’m betting that it’ll help you, too. I can’t wait to hear how. 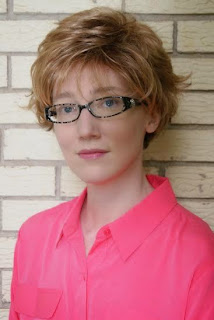 Her debut MG, THE JUNCTION OF SUNSHINE AND LUCKY also released in ’14, and became a favorite of teachers and librarians, who used the book as a read-aloud. Kirkus Reviews called THE JUNCTION “...a heartwarming and uplifting story...[that] shines...with vibrant themes of community, self-empowerment and artistic vision delivered with a satisfying verve.”

FERAL is Schindler’s third YA and first psychological thriller. Publishers Weekly gave FERAL a starred review, stating, “Opening with back-to-back scenes of exquisitely imagined yet very real horror, Schindler’s third YA novel hearkens to the uncompromising demands of her debut, A BLUE SO DARK…This time, the focus is on women’s voices and the consequences they suffer for speaking…This is a story about reclaiming and healing, a process that is scary, imperfect, and carries no guarantees.”

Schindler encourages readers to get in touch. Booksellers, teen librarians, and teachers can also contact her directly regarding Skype visits. She can be reached at hollyschindlerbooks (at) gmail (dot) com, and can also be found on her Website, Blog, Twitterhttps://twitter.com/holly_schindler, Facebook, and Tumblr The Lovely Bones meets Black Swan in this haunting psychological thriller with twists and turns that will make you question everything you think you know.

It’s too late for you. You’re dead. Those words continue to haunt Claire Cain months after she barely survived a brutal beating in Chicago. So when her father is offered a job in another state, Claire is hopeful that getting out will offer her a way to start anew.

But when she arrives in Peculiar, Missouri, Claire feels an overwhelming sense of danger, and her fears are confirmed when she discovers the body of a popular high school student in the icy woods behind the school, surrounded by the town’s feral cats. While everyone is quick to say it was an accident, Claire knows there’s more to it, and vows to learn the truth about what happened.

But the closer she gets to uncovering the mystery, the closer she also gets to realizing a frightening reality about herself and the damage she truly sustained in that Chicago alley….

Holly Schindler’s gripping story is filled with heart-stopping twists and turns that will keep readers guessing until the very last page.


And check out Holly's Book Trailer for FERAL!

PLUS! Holly has an awesome giveaway going on right now, so enter for a chance to win a signed copy! But hurry, only 2 days left!

a Rafflecopter giveaway
Adventures in YA Publishing at 6:00 AM