Craft of Writing: From Pantser To Planner: How I Changed My Writing Style by Victoria Strauss

We are incredibly pleased and tickled pink to have Victoria Strauss on the blog today discussing some amazing writing techniques. Victoria is the widely acclaimed author of many young adult and adult novels and her advice is something to watch out for.

From Pantser To Planner: How I Changed My Writing Style by Victoria Strauss


I'm the original pantser. I hate planning and preparing. I'd rather just dive into whatever it is and learn as I go. This has gotten me into some messes, as you can imagine. Deciding to refinish a table and realizing halfway through that you really ought to know how to work with furniture stripper is not a recipe for a happy outcome.

Once upon a time, that was also how I wrote.

Nearly all my books require some degree of preliminary research. But after investing that initial effort, I just want to get on with the actual creation. When I first began writing, I'd start out with a premise, a setting, a compelling image for the beginning, and a definite plan for the end. The rest was a blank canvas that I couldn't wait to fill, discovering the bones of the story as I wrote it.

The problem was that the story never fell organically into place. I'd get interesting ideas for characters and scenes and plot points that sometimes worked, but often took me down irrelevant byways or banged me up against dead ends. Somewhere around the middle of the book (which never turned out to match any of the hazy ideas I might have had at the outset), I would realize that I’d gotten to a place that didn't fit either my planned ending or my already-written beginning, and be faced with the choice of throwing out a lot of material or making major changes to my basic concept. You'd think, since my concept was so nebulous, I wouldn't have a problem tossing it; but those strong beginning and ending images were (and still are) the essence of the book for me, what made me want to write it in the first place. I could never bring myself to abandon them.

In the end I always managed to pull it together. But it was exhausting and frustrating to do so much backtracking and re-writing, and with each book the process seemed to become messier. By my third novel, I felt that I was doing more fixing than creating--and if you do too much fixing, the seams start to show. Writing by the seat of my pants clearly wasn't working for me. I realized that if I wanted to continue with my writing career, something had to change.

So I decided to turn myself into a planner. No more pantsing. No more blank canvas. I'd discipline myself to craft my plot in advance, creating a road map to guide me all the way from A to Z.

But how to plan, exactly? Books on how to write offer a plethora of methods. Index cards. Whiteboards. Timelines. Checklists. Worksheets. Character questionnaires. Three-act structure. The Snowflake Method. Yikes.

Outlining (the kind of conventional I.A.1.a. outlining I learned in school) seemed most familiar. So for my fourth novel, that's what I decided to try. It totally did not work for me. It was too terse, too cold, too structured. Too boring.

Next I attempted a chapter-by-chapter synopsis. But that felt too arbitrary--how could I lock myself into a chapter structure before I knew the rhythm of the narrative?--and too choppy. I didn't want to jump from chapter to chapter like hopping across a series of rocks. I wanted the story to be all of a piece: to simply flow.

So I decided just to tell the story from start to finish, imagining myself speaking to a rapt audience in the warm glow of a blazing campfire, with darkness pressing all around. This approach fit me much better. It felt creative; it had flow. I still took wrong turns and stumbled down blind alleys--but it's a lot easier to fix those in a synopsis than in a manuscript. And when I was done, I had a clear path from my blazing beginning image to the ending I was dying to write.

For reasons that had nothing to do with planning, I never did finish that fourth novel. But I've used this basic method ever since. First I figure out the core of the book: premise, setting, opening and conclusion. Then I build a bare-bones road map in my head, establishing the story arc and the main characters, making sure I can travel all the way to the end without getting lost in the middle. Then I write a synopsis, fleshing out the story bones and adding detail to plot and characters, but not drilling down to the level of individual scenes (unless an image really grabs me). For a 100,000-word book, my synopses generally run about 10-12 single-spaced pages. I also do brief character sketches as I go along.*

Once I'm done with all this preparation, I file it away and never look at it again. This may seem like a waste of effort. But writing from memory, without paying slavish attention to a plan, gives my pantser's soul the flexibility it needs, allowing room for change and inspiration, for those "aha" moments that, for me, are the most exciting part of writing. Because I do have a plan, however--because I've fallen into most of the holes and backtracked out of most of the dead ends in advance--I don't veer off track the way I used to; and where I do diverge, it's productive rather than destructive. My finished books nearly always differ in significant ways from my initial road map. But the important plot turns don't change.

This melding of planning and improvisation is the best balance I've found between the creative license I crave and the structure I need.

Changing my approach to writing has also taught me something important about writing itself: there is no "correct" or "best" way of doing things--only what's best for you. I can't count the number of times I've heard that planning destroys inspiration, or that only hack writers plan, or that real creativity is letting the story find you, not the other way around. Conversely, most of the highly-recommended planning techniques I tried felt too constraining or too boring.

Trial and error is the key. Don't be afraid to experiment. If something isn't working for you, don't be afraid to abandon it and try something new. It took me a long time, and many mistakes, to figure out my ideal method. But eventually I found my way.

* If worldbuilding is needed, as with my fantasy novels, I work that out in between the in-my-head planning and the written synopsis (I've written about my worldbuilding method here: http://www.victoriastrauss.com/advice/world-building/). 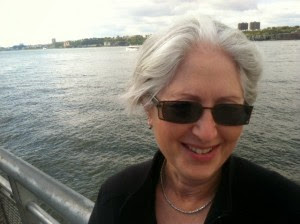 Victoria is the author of nine novels for adults and young adults, including the Stone fantasy duology (The Arm of the Stone and The Garden of the Stone) and Passion Blue and Color Song, a pair of historical novels for teens. In addition, she has written a handful of short stories, hundreds of book reviews, and a number of articles on writing and publishing that have appeared in Writer’s Digest, among others. In 2006, Victoria served as a judge for the World Fantasy Awards.

Victoria is the co-founder, with Ann Crispin, of Writer Beware, a publishing industry watchdog group that provides information and warnings about the many scams and schemes that threaten writers. She received the Service to SFWA Award in 2009 for my work with Writer Beware.