What The Hale! By Elizabeth Langston and Lisa Amowitz

Ever wondered how those amazing book collaborations happen as if by magic? We did too! So here's a great story from two of our favorite people about how they made that magic happen.

By Elizabeth Langston and Lisa Amowitz

Elizabeth: Last winter, my editor sent me a suggestion that has since changed my life. I had three books releasing in 2014 and no book covers. The publisher, Spencer Hill Press, had another author—Lisa Amowitz—who also designed books covers. Did I have time to work with her?

I couldn’t say “yes” quickly enough. I’d seen other covers that she’d designed and coveted them! Within days, Lisa and I were messaging feverishly, tossing out ideas, zeroing in on concepts, agreeing (and disagreeing) in a burst of creative energy that felt amazingly natural.

Lisa: First let me say that working for a small publisher, I often get the chance to work directly with authors. Elizabeth and I clicked immediately and what started as a professional relationship quickly evolved into a friendship. We found that despite being polar opposites in temperament and background, we somehow connected on a deeper level.

Elizabeth: Unexpected but true! Even though we’d ended our collaboration with the book covers, Lisa and I enjoyed our budding friendship so much that we just had to stay in touch.

Fast forward to March. After I’d spent a long weekend doing historical research in Williamsburg, Virginia, I came home and messaged to Lisa that I’d visited one of the film locations for the TV series TURN. Immediately, she started gushing about Revolutionary War spies and, in particular, Nathan Hale. Yeah, yeah, whatever. I love history, but I rarely obsess over guys who’ve been dead since the 1700s. (I reserve my obsessions for alive-but-inaccessible guys, like Michael Fassbender.)

Lisa: I also shared my (then secret but now totally out in the open) insane and immature crush for actor Benedict Cumberbatch, and after a conversation about the show TURN, I was amazed when Elizabeth did not laugh about my odd fascination for Nathan Hale. (Yes--between Cumberbatch and Hale, I’m used to plenty of eyerolls and blank stares from friends and family--though more with Nathan. Benedict seems to be quite popular these days.) When Elizabeth did not laugh in my face, I popped the question: “Do you want to co-write a YA story about Nathan Hale?”

I’d already read her writing and knew our styles would mesh beautifully. But the main thing is that I knew that Elizabeth had something important that I lacked—Elizabeth knew how to do historical research, something I’d tried, but had only gotten so far with before I’d given up in despair.

Given the complete lack of enthusiasm for my Nathan Hale fixation from everyone but my mother, I was stunned by her answer.

Elizabeth: I was really excited about the idea. Although I’d never vacationed before with a friend, here I was, agreeing to fly up to New York for five days to hang out with Lisa and see if this passionate interest in colonial history and Nathan Hale could result in a book. Even more, we had to discover if we had the personalities, skills, and time to make this project happen.

We held our writing retreat in July—and here are three of the lessons we learned.

Process. Your writing processes can be different—but you have to respect that and find a way to make them compatible. Lisa likes to write in chronological order. I like to jump around. At our retreat, we created a detailed synopsis of the whole book. Lisa uses it to write in order. I can still jump around.

Contribution. You both have to feel like you can contribute some unique and important to the project. For me, it’s my understanding of the colonial American world. For Lisa, it’s her deep knowledge of Nathan Hale and New York.

Voice. Your voices have to complement each other. I have a lighter voice with an old-fashioned feel. I’ll be writing mostly in the POV of our colonial heroine, a girl who begins our story at age 16. Lisa has the darker, edgier voice. She’ll channel Nathan Hale—a guy who always suspected that his life would be short—although maybe not even he would’ve guessed it would end at age 21.

Lisa: I’ll wrap this up by saying that the thing I feared most about our visit would be that I would prove to be “too much” for Elizabeth. At Spencer Hill Press, my nickname is The Squirrel on Crack, given my extroverted New Yorkie personality, my tendency to talk very fast and a LOT, and my frenetic multi-tasking. I was nervous. I thought Elizabeth would have the need to hide from me for many hours out of the day.

What I found instead, was that while she’s a more laid back and soft spoken Southern lady, her energy level is just as intense and hard-driving as mine. We worked relentlessly for ten to twelve hours a day, like two bloodhounds tracking down a trail. We had to make a special time each day for “playtime” in which we ended up plotting each other’s OTHER books (and drinking some very sweet wine).

In short, like in a good relationship, opposites attract. We have found that our opposite temperaments and capabilities are actually our strengths, and that the one area in which we are similar--DRIVE, PASSION and COMMITMENT (and love of a good yarn) was just the impetus we’ll rely upon to bring this project to its completion.

Elizabeth Langston lives in North Carolina, halfway between the beaches and the mountains. She has two daughters in college and one husband at home. When she's not writing software or stories, Elizabeth loves to travel with her family, watch shows on dance or Sherlock, and dream about which restaurant ought to get her business that night. 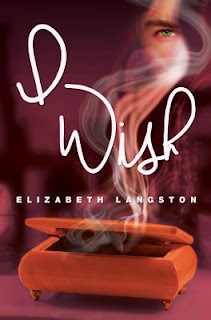 Lacey Linden is hiding the truth of her life—a depressed mom, a crumbling house, and bills too big to pay. While her high school classmates see a girl with a ready smile and good grades, Lacey spends her evenings seeking ways to save her family. On a get-cash-quick trip to the flea market, Lacey stumbles over a music box that seemingly begs her to take it home. She does, only to find it is inhabited by a gorgeous "genie." He offers her a month of wishes, one per day, but there's a catch. Each wish must be humanly possible.

Grant belongs to a league of supernatural beings, dedicated to serving humans in need. After two years of fulfilling the boring wishes of conventional teens, he is one assignment away from promotion to a challenging new role with more daring cases. Yet his month with Lacey is everything that he expects and nothing like he imagines. Lacey and Grant soon discover that the most difficult task of all might be saying goodbye.

LISA AMOWITZ was born in Queens and raised in the wilds of Long Island, New York where she climbed trees, thought small creatures lived under rocks and studied ant hills. And drew. A lot. She is a professor of Graphic Design at her beloved Bronx Community College where she has been tormenting and cajoling students for nearly seventeen years. She started writing eight years ago because she wanted something to illustrate, but somehow, instead ended up writing YA–probably because her mind is too dark and twisted for small children.

Her first book, Breaking Glass, was released by Spencer Hill Press in 2013, and she has three more novels scheduled for release: Vision, the first of the Finder series in May 2014, its unnamed sequel in 2015, and Until Beth in Spring of 2015. 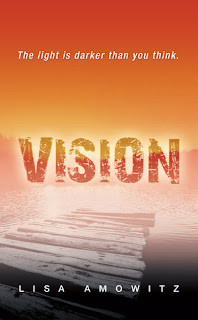 The light is darker than you think…

High school student Bobby Pendell already has his hands full—he works almost every night to support his disabled-vet father and gifted little brother. Then he meets the beautiful new girl in town, who just happens to be his boss’s daughter. Bobby has rules about that kind of thing. Nothing matters more than keeping his job.

When Bobby starts to get blinding migraines that come with scary, violent hallucinations, his livelihood is on the line. Soon, he must face the stunning possibility that the visions of murder are actually real. With his world going dark, Bobby is set on the trail of the serial killer terrorizing his small town. With everyone else convinced he’s the prime suspect, Bobby realizes that he, or the girl he loves, might be killer's next victim.