Hi everyone! It's Monday again and time for another roundup of YA books coming out this week! It's a quiet week for YA releases, but we have a giveaway of a signed copy of SEA OF SHADOWS by the wonderful Kelley Armstrong!

Enjoy and have a great week! 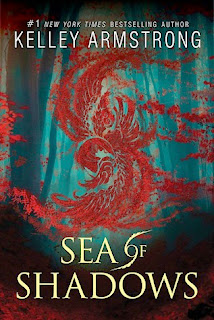 Twin sisters Moria and Ashyn were marked at birth to become the Keeper and the Seeker of Edgewood, beginning with their sixteenth birthday. Trained in fighting and in the secret rites of the spirits, they lead an annual trip into the Forest of the Dead. There, the veil between the living world and the beyond is thinnest, and the girls pay respect to the spirits who have passed.

But this year, their trip goes dreadfully wrong.

With all the heart-stopping romance and action that have made her a #1 New York Times bestselling author, and set in an unforgettably rich and dangerous world, this first epic book in the Age of Legends trilogy will appeal to Kelley Armstrong's legions of fans around the world and win her many new ones. Shana has always had a blind spot for boys. Can she trust the one who's right in front of her?

Sixteen-year-old Shana Wilde is officially on a Boy Moratorium. After a devastating breakup, she decides it's time to end the plague of Mr. Wrong, Wrong, and More Wrong.

Enter Quattro, the undeniably cute lacrosse player who slams into Shana one morning in Seattle. Sparks don't just fly; they ignite. And so does Shana's interest. Right as she's about to rethink her ban on boys, she receives crushing news: Her dad is going blind. Quattro is quickly forgotten, and Shana and her parents vow to make the most of the time her father has left to see. So they travel to Machu Picchu, and as they begin their trek, they run into none other than Quattro himself. But even as the trip unites them, Quattro pulls away mysteriously... Love and loss, humor and heartbreak collide in this new novel from acclaimed author Justina Chen.

Author Question: What is your favorite thing about A Blind Spot for Boys?

Imagine a young woman who’s a complete man magnet. Imagine that she’s been heartbroken by someone she thought was her Mr. Right. Imagine that she’s been in denial over the truth about their relationship: who he truly is, who she pretended to be. Imagine learning to see herself and her past clearly. “It was shocking to consider that even though Dom went to the right school, knew the right people, drove the right car, aspired to the right career, he may never have been my Mr. Right.” That’s what I love about Shana’s journey in A BLIND SPOT FOR BOYS. She’s able to look unflinching at the truth by the end of the book. Love. That. Who's the real victim here? This tense and gripping exploration of cyberbullying and teen suicide is perfect for fans of Before I Fall and Thirteen Reasons Why.

Late at night Tori receives a random phone call. It's a wrong number. But the caller seems to want to talk, so she stays on the line.

He asks for a single thing—one reason not to kill himself.

The request plunges her into confusion. Because if this random caller actually does what he plans, he'll be the second person connected to Tori to take his own life. And the first just might land her in jail. After her Facebook page became Exhibit A in a tragic national news story about cyberbullying, Tori can't help but suspect the caller is a fraud. But what if he’s not? Her words alone may hold the power of life or death.

With the clock ticking, Tori has little time to save a stranger—and maybe redeem herself—leading to a startling conclusion that changes everything…

Author Question: What is your favorite thing about Random?

My favorite thing about RANDOM was the opportunity to get inside the head of a character that may very well be not well liked by readers. And with good reason. The thing about this protagonist, Tori, is that she’s not exactly the hero of the piece; and as her creator, I had to spend time in emotional-memory places I usually don’t have to inhabit for very long. It was a challenging book to write. I worry that some readers won’t understand the point of the novel as a result. True Earth has returned during a massive snowstorm in Manhattan-and this time they have an army. Rhys, Noble, Sophia, and Peter know they don't stand a chance against the enemy without Miranda. And once they revive her, she's horrified to find her world in flames.

The enemy occupation is brutal, but the director promises to release her hold on the city if Mr. East is turned in, and Miranda and her team are determined to find him. With her grief over the losses she has suffered fueling her spirit, Miranda knows that this time the sacrifices have to be worth it.

Packed with suspense and deception, Dan Krokos brings Miranda's journey to a mind-bending conclusion as she risks losing everything in the fight for her future. Zee has given up her entire world to be with David on far-future Earth, confident that their love will overcome all obstacles. But beneath its lustrous surface and dazzling technology, New Earth is full of challenges, including the animosity of David’s wealthy and powerful family.

As Zee struggles to find her place, David travels back to past Earth. Then, on a mission to Pompeii on the eve of the Vesuvius eruption, he vanishes. Zee knows he is in mortal danger, but will she be able to rescue him in time?