Craft of Writing: Crash Course in The Basics of Writing by Kimberley Griffiths Little + A GIVEAWAY!

Kimberley Griffiths Little is definitely best known for her middle grade novels, of which she has written seven. She makes her Young Adult debut this September with FORBIDDEn and I personally cannot wait to get my hands on this beautiful book. Her advice is brilliant and I have a personal favourite part (that i'm sure you all will know as soon as you come to it) but read on to find out!

I've been reading and writing middle-grade novels for years and years. My seventh middle-grade book, The Time of the Fireflies, will be published by Scholastic August 1, and I’m breathing a sigh of relief that terrific reviews are beginning to trickle in from Publisher’s Weekly, Kirkus, and School Library Journal. I’ve always adored middle-grade books. The years between 7-12 have often been called The Magical Years of Reading; kid characters and kid readers in the middle of childhood and making that transition from elementary school into their teen years . . . which leads us straight into Young Adult novels. And I love Young Adult novels! I actually read more YA titles these days than MG.

Young Adult novels are very different beasts. Despite having similar characteristics (a young main character, great plots, exciting adventures) YA definitely ramps things up. And—in the last 10 years, more adults are reading YA than ever before because it’s just so good. Spectacular writing combined with delicious and compelling plots and characters.

When planning your Young Adult novel – no matter the genre – here are a few things to think about:

Age of Characters: Of course, your YA novel is generally going to have a Main Character between 14-18 years of age. Readers who are 12-14 years of age want to read about characters who are older than they are. Today, the majority of characters are in the 16-18 age range. Some YA novels are listed as 12 years and up, while others are 14 years and up. The age range is a publisher/marketing decision, not something you, as the writer, need to worry about, but if you explore more adult themes as well as explicit sexual relations and, perhaps, include language such as the "F" word, your book will more likely be listed as 14 and up. If in doubt about how the age group you are writing about talks, go stalk your local high school, Community center or even Mall to see what the "cool" things to say are now.

Themes & Issues: In YA, you can write about anything these days. No subject is taboo. Sexuality, Incest, Rape, Death, Suicide, Murder, Drugs, Runaways, Illegitimacy, Poverty, etc. Write about something that is important to you. Don’t be afraid or censor yourself. Write the story you are drawn to and compelled to write.

***A short time-out for some YA Publishing History Perspective: Over the past decade, the esteemed author Richard Peck has become better known for his MG Newbery winning books, but the first dozen books he published were Young Adult novels—the first in 1985. Remembering the Good Times is about the friendship of two boys and a girl who have been childhood friends. In high school, one of the boys commits suicide. The other two friends are left devastated and wondering how they never saw the signs and the guilt they feel wondering what they could have done to prevent their friend’s death. Richard Peck was also one of the first writers to publish YA novels about rape and teen pregnancy in the late 1980s. Are You in the House Alone? Don’t Look and it Won’t Hurt, respectively. So for those new to the YA literature scene, John Green did not create the serious literary problem novel for young adults. He's just continuing a long tradition started by brilliant writers back in the 1970s and 1980s.

Relationships: In your YA novel, there must be peer friendships that are important and impact your main characters. Often witty friends and classmates or neighbors will bring in compelling subplots, which intersect with the main plot of your novel. Also, parents often come and go, leave the country for jobs, get divorced, remarry, abandon their children, etc., but the break-down of those familial relationships with its accompanying angst and craziness can often be a major plot or subplot of your story.

School/College: High School is usually a strong aspect of the YA novel and teachers and classmates can bring important elements as well as provide interesting characters and conflict. If not public high school, then private schools, boarding schools, homeschools. Even in fantasy or sci fi novels, the characters usually go to a futuristic type of schooling. Bringing your high school alive can be a challenge to build, but a lot of fun and intriguing angles to your story. Like adding vampires to the high school. It worked for Bella but not so much for other High School Vampire stories.

Setting: Settings need to be well developed and the MC needs to interact in meaningful ways with the setting. Make your setting specific and interesting, not a bland backdrop of Anywhere, Any City, USA. I personally love using setting to bring out characteristics or hobbies or the culture of my MC as well as develop the plot and conflict.

Love Interest: There must be a love interest in a Young Adult novel. Think of this word: longing. There might be multiple love interests. Think Team Edward or Jacob. Team Gale or Peeta. Although I caution about using the traditional love triangle. Readers appear to be rebelling against love triangles and want a fresh take on the romance aspect of YA novels. Maybe a love square - or try an octagon.

Kissing: There must be kissing! There can often be sex, but the parameters and boundaries will depend on the type of book you’re writing as well as how far you personally want to go with your characters. But I find that a more literary, serious novel, whether it’s contemporary or historical or fantasy, will have more sexual scenes. But be careful when pushing the sexual acene envelope. If your scenes are TOO graphic then you start venturing more into the New Adult book genre, which may be too mature for 12-16 year olds. More "she was thrilled by his touch" rather than "he grabbed her *Beep* with his hand."

Voice: Today, most YA novels are written in First Person Point of View. If you’re writing in Third Person, be careful that you go Deep Point of View so that your reader feels like they are right in the head/mind/thoughts of your protagonist. Readers of any age want to feel like they’re right inside the story living it for themselves. You want the reader to feel like they are the Good or Bad angel sitting on the MC's shoulder.

Language/Tone/Mood: The language in your YA novel can change depending on the type of story. If you’re writing a thriller or mystery, the pacing and language will be faster, perhaps more spare; there might be more dialogue and not as much description, narration, or inner thoughts. Check out Don’t Turn Around by Michelle Gagnon, Starter or Enders by Lissa Price, or Killer Instinct by S. E. Green. If you’re writing a more literary novel the use of language and tone and mood will change drastically. Samples: Novels by Maggie Steifvater like The Scorpio Races or Dreams of Gods and Monsters by Laini Taylor.

Did I mention kissing??? And HEAT? And longing. Yeah, those elements make your novel a Young Adult – and keep your reader turning the pages. Will Peeta ever get Katniss to love him? Will Edward finally give in and eat Bella if she kisses him? etc. (Admit it, by book 4 you were kinda hoping she would get eaten ;) )

I’ve been working on my upcoming novel, Forbidden (Harpercollins, November 2014) for many years in between the middle-grade novels. It’s taken a lot of practice to get the voice, tone, language, and relationships right (and now Harpercollins is marketing the novel as a cross-over because of the sophisticated themes and plot).

I often feared that MG was my "true" voice. But just like becoming a good writer in any genre, I kept practicing and revising endlessly. All the hard work finally paid off when my agent sold the entire trilogy to a major publisher—just when I thought the project would never sell and I might have to shelve it forever.

Don’t give up. Study the best YA novels out there. Practice your craft. Believe in your story. Love your story. Immerse yourself. Or if you're desperate go watch some of those sappy romance movies and just imagine it with teenagers, in high school. And add zombies for good measure. Who can resist zombies?

Now Kimberley has VERY graciously offered up an amazing giveaway and we are SO excited to share it with you today! Enter below for a chance to win an ARC of FORBIDDEN! 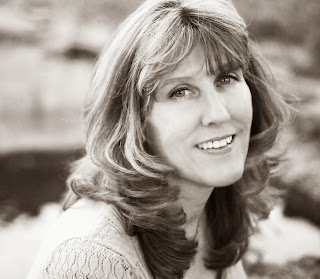 When she was a kid Kimberley Griffiths Little read a book a day, scribbled stories, and dreamed about having her very own book on the library shelf. She adores the mysterious swamps of Louisiana, Paris, England, Scotland, Jordan, and anything old and musty with a secret story to tell.  Kimberley was born in San Francisco and raised in the Bay Area, but now lives in an adobe house on the banks of the Rio Grande in New Mexico with her husband and three sons. She’s fairly certain that after drinking so much Land of Enchantment water, some of that ancient magic got into her blood and now spurts out her pencil—um, ergonomic keyboard.  Kimberley is the author of seven award-winning middle-grade novels, the last four titles with Scholastic, which sell hundreds of thousands in the Book Fairs.

Her Young Adult debut trilogy, FORBIDDEN, an exotic thriller in the ancient mysterious lands of Mesopotamia with roots in belly dance and goddess temples, has been 10 years in the making. It launches in November with Harpercollins.   She makes way too many cookies when writing or revising—and the best book trailers filmed on location with voiceovers and original music. For reals. Check them out here: www.kimberleygriffithslittle.com. Find her on Facebook, Twitter, Goodreads, and Youtube. 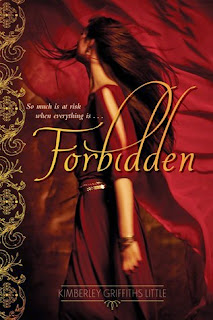 A sweeping, epic saga of romance and hardship, set against the dramatic backdrop of ancient Mesopotamia—perfect for fans of Cleopatra's Moon or the adult bestseller The Red Tent.

In the unforgiving Mesopotamian desert where Jayden’s tribe lives, betrothal celebrations abound, and tonight it is Jayden’s turn to be honored. But while this union with Horeb, the son of her tribe’s leader, will bring a life of riches and restore her family’s position within the tribe, it will come at the price of Jayden’s heart.

Then a shadowy boy from the Southern Lands appears. Handsome and mysterious, Kadesh fills Jayden’s heart with a passion she never knew possible. But with Horeb’s increasingly violent threats haunting Jayden’s every move, she knows she must find a way to escape—or die trying.

With a forbidden romance blossoming in her heart and her family’s survival on the line, Jayden must embark on a deadly journey to save the ones she loves—and find a true love for herself.

Set against the brilliant backdrop of the sprawling desert, the story of Jayden and Kadesh will leave readers absolutely breathless as they defy the odds and risk it all to be together.