Craft of Writing: How To Make A Killer Trailer (For No Money) by Amy Talkington


Amy Talkington's debut YA novel has been blowing up the blogosphere with the creepy, original story, and has made me want to read the book from the instant I heard of it. I am a complete sucker for boarding school books and LIV, FOREVER should be bumped up on your tbr lists!

When I’m not writing books, I’m a filmmaker and screenwriter. As a director, I’ve made seven short films and one feature film so I welcomed the challenge to create a book trailer for LIV, FOREVER.

My publisher was a little leery of the whole trailer idea (I don’t think they’ve had great success in this area before). But I told them I wanted to do it and we wouldn’t have to use it if they didn’t think it helped. Before I started, they offered a few suggestions. They told me the best book trailers are short (a minute or less) and convey the tone of the book (versus the story). These were very useful words of wisdom.

My book, overall, has a dark but romantic tone with some creepiness. The publishers kept referencing “American Horror Story” in the press materials (though I admit I’ve never seen the show!) so I looked at the “American Horror Story” trailer and title sequences and drew some inspiration from them. I also looked at several other horror film trailers and credit sequences.

Looking at these sequences and thinking about LIV, FOREVER, I realized how much tone I could convey in very close shots. I knew I didn't want to assign clear, crisp faces to Liv or Malcolm, so I decided to shoot the trailer almost entirely in extreme close ups (ECUs). I thought this would keep some mystery around the characters but still convey a lot of tone. And, also this could be done cheaply (key!).

I realized I needed some help. I am not a good shooter or editor (and didn't have time to deal with a lot of the details of casting and prep) so I asked my assistant (for my film and screenwriting work) Victoria if she'd like to co-create the trailer with me. By sharing the director credit with her, I felt more comfortable asking her to contribute all that work for little money. (Plus, she knows the book inside-out and brought a lot of great ideas to the table.)

First, I made a shot list of all the key images from the book that could be conveyed in close ups. There were many. And, together, Victoria and I set about gathering props and equipment.

I did think it'd be a good idea to have some establishing shots of a school like Wickham Hall. Luckily Victoria had a trip to NYC planned (Thanksgiving!) so I asked her to "steal" some "establishing" shots up at Columbia University (my alma mater). Those are the shots at the beginning of the trailer that show columns and the sculpture. To me, they suggest a fancy school in an elegant but kind of oblique and eerie way.

The only equipment we rented was a very long lens (for the ECUs). We borrowed a few lights and a tripod from my brother (a documentary filmmaker) and Victoria had a camera. The only props we bought were fake blood, a vintage white dress, a locket, some dead moths, and some old yearbooks. Pretty much everything else we borrowed or made.

We cast two young actors (letting them know they would be mostly seen in extreme close ups). And we scheduled a shoot day. On the shoot day, we worked in my basement (creepy!) and shot hundreds of close ups and extreme close ups. We also recorded the actors reading “Bright Star,” the Keats poem that's featured in the book. And the final task of the day was to start a small fire in my driveway (you can see it in the final shots of the trailer). I’m really glad my neighbors didn’t call the fire department (And, yes, we had a fire extinguisher on hand!).

But, honestly, most of the work was done in post. We spent weeks editing and sound designing the trailer to get the perfect balance of romantic and creepy. We strived to give the trailer a narrative shape—all building to a dramatic ending—while keeping it under a minute. We played with effects, like layering in old Super 8 film grain to give the video a grainy, dated feeling and making flash cuts to create eerie, ghost-like moments. My husband Robbie Adams is a super talented music supervisor so he secured the music (for free!) and did the incredible sound design (along with the help of his nephew who recorded some sound effects). The sound design was crucial for making this abstract kind of trailer work.

When I shared the final cut with the publisher they were pretty excited. They gave me a few notes on the sound and then submitted it to USA Today, where it premiered just a few days later.

Of course many people debate whether a trailer is “worth” it. In my case, I think it certainly was. The publisher was excited to see the pre-orders of the book soar after the premier of the trailer. To date the trailer has been seen by almost 4000 people. 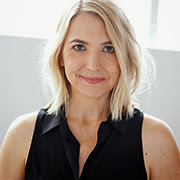 amy talkington is an award-winning screenwriter and director living in los angeles. before all that she wrote about music for magazines like spin, ray gun, interview, and seventeen (mostly just as a way to get to hang out with rock stars). as a teenager in dallas, texas, amy painted lots of angsty self-portraits, listened to the velvet underground and was difficult enough that her parents finally let her go to boarding school on the east coast. liv, forever is her first novel.

You can see some of her short films on her website. And, if you want to know all the latest on Liv, Forever follow Amy on Twitter, Tumblr and Goodreads 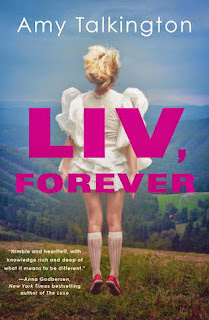 When Liv Bloom lands an art scholarship at Wickham Hall, it’s her ticket out of the foster system. Liv isn’t sure what to make of the school’s weird traditions and rituals, but she couldn’t be happier. For the first time ever, she has her own studio, her own supply of paints. Everything she could want.

Then she meets Malcolm Astor, a legacy student, a fellow artist, and the one person who’s ever been able to melt her defenses. Liv’s only friend at Wickham, fellow scholarship kid Gabe Nichols, warns her not to get involved, but life is finally going Liv’s way, and all she wants to do is enjoy the ride.

But Liv’s bliss is doomed. Weeks after arriving, she is viciously murdered and, in death, she discovers that she’s the latest victim of a dark conspiracy that has claimed many lives. Cursed with the ability to see the many ghosts on Wickham’s campus, Gabe is now Liv’s only link to the world of the living. To Malcolm.

Together, Liv, Gabe, and Malcolm fight to expose the terrible truth that haunts the halls of Wickham. But Liv must fight alone to come to grips with the ultimate star-crossed love.

Amazon | IndieBound | Goodreads
Adventures in YA Publishing at 7:00 AM