Requests, Critiques, and Math: A Pitch Plus One Contest Wrap Up

Hi, it's Lisa here with a wrap-up of the Pitch Plus One Contest that just concluded this weekend.

Huge congrats to all who participated! And a major thank you to all our wonderful judges!

As we wind things up, I wanted to take a moment to provide some commentary. I've always wanted to be a part of a contest like this because I've seen how helpful it is to writers participating in things like PitchMadness. Well, now I've had my opportunity and boy was it a wild and wonderful ride!

We started with almost 100 entries from aspiring writers and had a popular vote to narrow it down to only 50. The next round was judged by 10 respected bloggers, who picked the top 25 using score cards that were eventually passed along as feedback for each participant. This was to make things fair for everyone except me, because I was forced to use math. But it was worth it!

I have to point out that it was at this time that entrants began emailing, withdrawing entries due to offers of representation! How awesome is that?? We had four in total and we are very excited and proud of all of them!

The top 25 were reviewed using the same score card method by 10 published authors, who narrowed the field (a very difficult task) to only 10.

The top 10 were then judged by our five amazing agent judges. We were thrilled to have four of them make requests despite only being asked to judge the entries! And three of the four agents requested more than one manuscript. I'm sure those who received requests are even more thrilled!

Our agents gave thoughtful comments and I tallied the scores. I want to point out that BOTH of the winners (as judged by agents) were past participants in our own First Five Pages Workshop, another tool I'm very proud of creating with Martina. I love that it continues to evolve and help writers find agents and editors for their manuscripts.

All in all, I'd call this contest a success. How about you? Would you enter again? What would you change? Feedback is always welcome! I for one am looking forward to helping host the next Pitch Plus One Contest later this year.

And in the meantime, here's some feedback from our two winners themselves!

My name is Rebecca Knickmeyer Santelli. I love writing books and I hate writing pitches. I envision my manuscript crouching outside an agent’s window, tiny hands pressed against the glass, eyes glistening with disappointment as the agent presses delete. So I’m very grateful to the ladies at Adventures in YA Publishing for running their recent pitch contest. This was my first pitch contest. I started with a pitch I liked and by revising every round ended up with a pitch I am pretty d*** proud of.

Of course, I did not enter the contest for purely educational purposes. I secretly hoped to make the final round and capture the attention of those elusive agents. With that goal in mind, I tested pitches with my online critique partners, local writers’ group, querytracker comrades, and Evil Editor. I had already honed my opening through the First Five Pages Workshop, also hosted by Adventures in YA Publishing, and revised the entire ms based on what I learned. Making the final was thrilling; getting 3 full requests from the agent judges was even better. For those debating whether to enter next time, do it! Send in your best and let the readers and judges make it even better.

The first few pages of LEAVING PEACESYLVANIA came to me really suddenly and just in time to enter the First Five Pages Workshop. I really had only written about 15 pages when I sent those first five in. And it was really helpful. I questioned where I started my manuscript and I played around with the tone. Those first five pages evolved quite a bit over the month. And though I ended up keeping my initial starting point, I was definitely geared toward focusing on those crucial first pages after the workshop.I finished drafting in February and while polishing and revising I started working on pitches. That's when I saw the AYAP Pitch contest and I thought it'd be a great place to test drive some ideas. My favorite and least favorite part of the contest was that it spanned a month. It was really hard to wait week to week, BUT I was super motivated with each subsequent round to not only perfect my pitch but to rock my revisions on the entire manuscript knowing that agents might want to take a look.Posting all of the pitches entered was really helpful! I entered the pitch plus 250 contest last year with another manuscript and we only got to read the top ten. It's really cool to see what's out there and to get a good sense of what ideas are done a lot and what's truly unique and new. It's also fun to pick out your faves so that when they pop up in other contests or on twitter, you can cheer them on. It was a bit daunting to read and vote for my favorite pitches, but, again, it was helpful, because this is what agents have to do. I was a little torn on whether or not I liked the voting format because I didn't plan on campaigning for my pitch, but others seemed to have no problem doing so.The community formed around the contest was really great. The comments from the judges were helpful and the so were the comments from other participants. I didn't take all the advice, but if many people said the same thing, obviously they were on to something!I could not have been happier to have made it into the agent round and I was thrilled when I got two requests for the manuscript. I wasn't entirely sure I was ready to query because initially my goal was to do the contests, refine, and then send, but I sent out some top picks soon after getting the requests. I loved having a polished 150 word pitch, because it basically worked as my query letter. I added in my info and a couple words here and there, but it was ready to go. And I'm happy to say that already I've gotten one more request from the slush pile.I was over the moon to find out I had won a three chapter critique from Christa Heschke. It's seriously the best prize in a contest ever! I cannot wait to hear what she thinks and to make this book the best it can possibly be. This was absolutely the best place to start my querying journey. 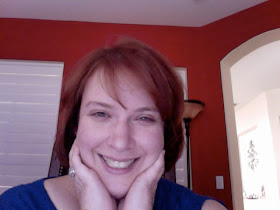 Lisa Gail Green writes all types of genre fiction.The first novel in her DJINN series, THE BINDING STONE, is now available! She would most definitely have a werewolf for a pet if she weren't allergic.

Website/Twitter/Facebook/Goodreads
Lisa Gail Green at 9:00 AM