Inspired Openings: How One Moment Can Inspire You by Martyn Bedford

Award-winning writer Martyn Bedford reveals the inspiration behind Never Ending, his second novel for teenagers and young adults. Martyn’s previous teen novel, Flip, won four prizes in the UK and has been translated into seven languages.

How One Moment Can Inspire You by Martyn Bedford


If I hadn’t almost wiped out my family in a car crash I might never have written Never Ending.

About three years ago, we were heading out on a daytrip – me at the wheel, my wife beside me, navigating, and our two daughters in the back, in iPod-land. We’d been stuck behind a truck for a while and I was itching to overtake.
So I did. Only I shouldn’t have done. Not on that stretch of road, anyway.

I’m still not sure how the car coming in the opposite direction didn’t hit us head-on. In the nanosecond before impact, I swerved, the other driver swerved, and – by half a hair’s breadth – we avoided a collision. At the speed we were travelling, it’s unlikely that anyone in either car would have been pulled from the wreckage alive.
For the rest of the day, two versions of events unfolded: the real one, in which we continued our daytrip (the walk in the hills, the picnic, the ice creams) . . . and the one in my head (the ambulance, the hospital, the morgue).

But I also had the beginnings of an idea for a novel.

Of course, I don’t mean I had the idea right there and then in the car. It wasn’t as if my wife, white-faced and trembling, turned to me and gasped, “Oh my God, you nearly killed us!”, only for me to reply, “Yes but never mind that, darling, I’ve just had a brilliant idea for my next book!”

Over the next few weeks, though, our near-miss preyed on my mind. I began to ask the question that, for many writers, is the starting point of a story: What if? What if we’d all died? Or, worse, what if my wife and daughters had died and I’d survived? What if I had to live with that loss and grief . . . and the guilt of having killed the people I love most?

From this last question, the story of Never Ending evolved.

It’s about a 15-year-old girl, Siobhan – or Shiv, as she calls herself – who is traumatised by the death of her younger brother Declan on a family vacation in Greece. He died because of her and she can’t live with what she did. Off the rails and unable to put her life – or her head – back together again, Shiv is sent away to a clinic that claims to ‘cure’ teenagers like her. But this is no ordinary psychiatric institution and she discovers that her release from her demons – if it comes at all – will come at a bizarre and terrible cost.
I should say that I’m not spoiling the plot, here – you can gather this much from the book-jacket blurb and the first chapter.

The novel is told in alternating storylines – the ‘before’ story (the family vacation, leading up to Declan’s death) and the ‘after’ story (Shiv’s subjection to the treatment regime at the clinic). I’m not going to give away how Declan dies, or Shiv’s part in it, but I can say that it’s not a car crash. As always happens when I turn personal experience into fiction, the made-up events end up bearing little resemblance to the original.

However, the underpinning idea – the ‘what if?’ – remains the same. In using Shiv to explore what it would be like to live with appalling, unbearable guilt, I was venturing into a place I’d been lucky to avoid visiting at first hand. And, perhaps, in putting her through that ordeal – immersing myself in her story while I wrote it – I was unconsciously punishing myself for the deadly mistake I almost made three years ago.

As well as writing novels for teenagers and young adults, Martyn Bedford teaches creative writing at Leeds Trinity University, in the north of England. Here is a set of notes on the openings of novels, which he prepared for his students on the MA in Creative Writing.

How should a novel start?

The opening of a novel is a threshold, separating the real world the reader inhabits from the world the novelist has imagined. It should therefore draw or invite the reader into this imagined world.

As writers, we need to be aware that readers begin a novel hesitantly. They are not yet familiar with the author’s tone of voice, range of vocabulary or writing style. They also have a lot of information to absorb and remember: characters’ names, their relationship to other characters, their situation, the context of time and place, and so on, without which the story cannot be followed.

Most readers will give the author the benefit of the doubt for at least a few pages before deciding to back out over the threshold and read something else instead. So the writer needs to “hook” the reader in those early pages – better still, in the early sentences, if not the opening sentence itself.

There are many ways to open a novel, ranging from those which subtly coax the readers into the story to those which drag them into it by the scruff of the neck. Here are some common examples:

a description of the story’s primary setting (the mise-en-scene);
a conversation between characters;
a self-introduction by the narrator;
a philosophical reflection which establishes the novel’s central theme;
a “frame” narrative which explains or sets up the context of the main story;
a dramatised scene, incident, event or episode;
the (descriptive, dramatised or discursive) introduction of the main character;
the establishment of the main character’s circumstances or situation;
an inciting or triggering incident which gets the plot up and running;
a prologue that flashes forward to a point which the story then builds towards.

In broad terms, the writer must consider whether to start with story, with character, with place and/or time (i.e. period), or with theme. These essential building blocks of a fictional narrative are integral to one another, and one (or more) of them will almost certainly provide your opening.

If your novel does not follow a linear chronology, you also need to consider where in the story’s timeline it should begin. If it has more than one narrative viewpoint, which one do you use at the start? Do you open with a wide or narrow focus? What tone do you wish to strike? It is also useful to consider what comes next – i.e. the narrative possibilities and limitations your opening creates.

In essence, the start of a novel should seek to answer – or give a strong hint towards – the two key issues which are on most readers’ minds when beginning a book:
What sort of story is this?
What is this story about?
The blurb on the back of the book also addresses these points, of course, but it’s the opening of the narrative itself which makes up the readers’ minds as to whether they wish to read on. 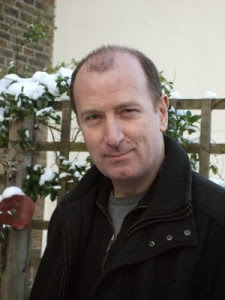 Martyn Bedford is the author of five novels for adults and two for young adults. His first YA novel, Flip (Wendy Lamb Books, 2011), won four prizes in the UK and ten books-of-the-year nominations and selections in the U.S., including the School Library Journal, the American Library Association, and a readers' choice from the Young Adult Library Services Association. His second YA novel, Never Ending, has received starred reviews from Kirkus and Booklist. Between them, Martyn's novels have been translated into 13 languages. He lives in the north of England with his wife and two daughters and teaches creative writing at Leeds Trinity University. 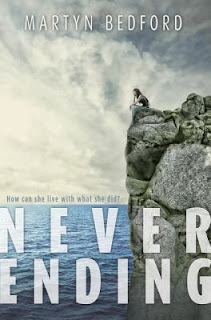 When a family holiday ends in tragedy, the grieving parents’ marriage is left in ruins and, Shiv, their 15-year-old daughter, is tormented by what happened … and her part in it. Off the rails and unable to live with her guilt, Shiv is sent away to an exclusive clinic that claims to “cure” people like her.

But this is no ordinary psychiatric institution and Shiv discovers that her release – from her demons, and from the clinic itself – will come, if it comes at all, at a bizarre and terrible price.