Well, I thought I was going to have cover news for you this week, but I was wrong. So I'm practicing delayed gratification. And it's HARD to wait. There will, however, be epic awesomeness to share with you shortly--huge giveaways and lots of fun things. Meanwhile, I'm trying to get ahead on the blogging because I need to concentrate on Book Two. And I have a new editor -- Sara Sargent has joined the Simon Pulse team and she'll be working with me on the sequel to Compulsion. She's lovely, so I'm delighted.


What else? Hmmh. We have a new First Five Pages workshop starting up next Saturday. As always, get the rules here. Our guest mentor will be the fabulous Elana Johnson, along with our entire list of permanent mentors.


And don't forget that the first round winners of our Pitch Plus One contest were announced today! Check the list out at the Adventures In YA Contests site, and then come back here tomorrow for the links to the shiny new pitches the top 50 participants have prepared based on the feedback they received.


YA GIVEAWAY OF THE WEEK The extraordinary journey that began in Miss Peregrine's Home for Peculiar Children continues as Jacob Portman and his newfound friends journey to London the peculiar capital of the world. But in this war-torn city, hideous surprises lurk around every corner. Like its predecessor, this second novel in the Peculiar Children series blends thrilling fantasy with never-before-published vintage photography to create a one-of-a-kind reacting experience. 
If you like the TV show Bones (I do) or Maximum Ride, you’ll love Virals.”—James Patterson

When twin classmates are abducted from Bolton Prep, Tory and the Virals decide there’s no one better equipped than them to investigate. But the gang has other problems to face. Their powers are growing wilder, and becoming harder to control. Chance Claybourne is investigating the disastrous medical experiment that twisted their DNA. The bonds that unite them are weakening, threatening the future of the pack itself.

The Virals must decipher the clues and track down a ruthless criminal before he strikes again, all while protecting their secret from prying eyes. And everyone seems to be watching.


My favorite thing about Exposure was exploring deeper connections between the Virals themselves. After the events of Code, the pack is in disarray, and they have a lot of personal issues to deal with. For the first time, they aren't working well together as a team, and it may be affecting their abilities. When confronted with a kidnapping that touches very close to home, the Virals have to get their act together in a hurry. In many ways, I think this is the most complete Virals adventure yet, and I hope the readers agree. 
Sixteen-year-old Austin Szerba interweaves the story of his Polish legacy with the storyof how he and his best friend , Robby, brought about the end of humanity and the rise of an army of unstoppable, six-foot tall praying mantises in small-town Iowa.

To make matters worse, Austin's hormones are totally oblivious; they don't care that the world is in utter chaos: Austin is in love with his girlfriend, Shann, but remains confused about his sexual orientation. He's stewing in a self-professed constant state of maximum horniness, directed at both Robby and Shann. Ultimately, it's up to Austin to save the world and propagate the species in this sci-fright journey of survival, sex, and the complex realities of the human condition. 
Ten years ago, Calamity came. It was a burst in the sky that gave ordinary men and women extraordinary powers. The awed public started calling them Epics.


The pacing. There are certain things that I was able to do with a single first-person viewpoint in a fast-paced action-oriented story that I haven't been able to do in any other story that I've written. I feel like the awesome pacing just tears you through the book and reads like a really fun action movie. I'm quite proud of how that worked. 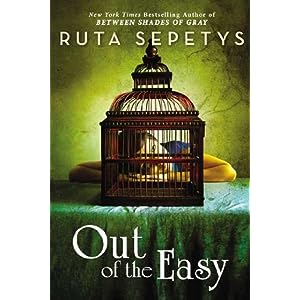 It’s 1950, and as the French Quarter of New Orleans simmers with secrets, seventeen-year-old Josie Moraine is silently stirring a pot of her own. Known among locals as the daughter of a brothel prostitute, Josie wants more out of life than the Big Easy has to offer. She devises a plan get out, but a mysterious death in the Quarter leaves Josie tangled in an investigation that will challenge her allegiance to her mother, her conscience, and Willie Woodley, the brusque madam on Conti Street.

Josie is caught between the dream of an elite college and a clandestine underworld. New Orleans lures her in her quest for truth, dangling temptation at every turn, and escalating to the ultimate test.

I’m late to the party on this one, but man, was it worth the wait! OUT OF THE EASY is full of vivid characters, tense plot points, and a setting and world that feels immediate and real, and yet appropriately historical all at once. The characters crack several jokes about Jo’s similarity to Cinderella, but also highlight the ways in which Jo is nothing like that scullery-wimp. Sure, Jo has scrubbed blood and booze and shame off the floors of a whorehouse most of her life, and yes, her own mother steals from her. But Jo isn’t satisfied with that limited existence, and she's already travelled everywhere in the books she's devoured at the bookstore where she lives and works. She intends to get out of New Orleans. Her desire to elevate herself drives the tension as events around her threaten to drag her back into the swampy morals and demands of her family and friends. She’s a brilliant character, and OUT OF THE EASY is the kind of a book you pick up and know from the first sentence that you’re in masterful hands. Ruta’s writing is deft and rich, and the story is mesmerizing. Love, love, love this book, and I couldn't recommend it more.

I've had my head down all week, so I'm behind on the bookish news. I do want to give a shout out to Katie and Sophie, the Mundie Moms, whose wonderful book blog turned five on Valentines Day. Stop by and wish them a happy birthday--but they're the ones handing out the presents in a MASSIVE giveaway.


So what about you? What's new in your book world? What are you reading? What do you wish you were reading?

Adventures in YA Publishing at 12:16 AM