Question of the Week: Do You Listen to Audio Books? + Interview Question with Laurie Boyle Crompton!

Hey everyone! It’s Clara Kensie, back with a new Question of the Week! In case you haven’t noticed, we’re shaking things up a little here at Adventures (for starters, have you noticed our new url? How awesome is that?), and now everyone on the team will be answering the QotW whenever they can, along with all of you!


Do you listen to audio books?

Jan: No, but I really wish I did. It would be able to enjoy so many more books if I could do something else while listening to them.

Clara: I try to listen to audio books. The awesome, generous website audiobooksync.com has over twenty free downloads of popular YA lit and classic audio books every summer, and last summer I downloaded all of them, planning to listen to them during my long commutes to work. But like Martina, I always end up zoning out. Maybe it’s because I have wonky hearing and I process things much better when I see them rather than hear them. Every workday before I pull my car out of the garage, I plug my tablet into the speakers and hit play on my latest audio book. It’s taken me nine months to listen to two and a half books. I’ll start off listening, but even if it’s a wonderful book (I’m currently listening to Grave Mercy by Robin LaFever) my mind wanders, and I realize that I’ve zoned out through the last fifteen minutes of the book, and have to rewind. At this pace, I will probably finish Grave Mercy and maybe only one more audio book before summer. This summer’s YA lineup at audiosync.com looks fantastic, and I plan to download them all. Will I actually listen to them? I promise you that I will try!

Alyssa: I completely can't afford audiobooks! They are so expensive, but I wish I did because I spend a lot of time on transit going to and from school everyday, and sometimes it's really difficult to read on the bus. I think audiobooks would be the perfect way to pass an hour long transit trip by getting sucked into a book, without getting motion sickness or being too dark to read!

WHAT ABOUT YOU? Do you listen to audio books? Where do you listen? Do you do anything else while you're listening?

We also have the pleasure of having Laurie Boyle Crompton answer a question for us today about her new book coming out February 4th, THE REALS PROM QUEENS OF WESTFIELD HIGH. The book deals with prom queens, high school, and reality television, so we asked Laurie to put herself in the spotlight.

We’ve all watched reality shows where people try to out-sing each other, or out-design each other, or out-smize each other. I’ve often thought it would be cool if they had a reality show for writers where they compete in a series of writing challenges. But then I imagine what that would look like and realize; it would look like a bunch of people doing what I’m doing right now. Sitting here at a keyboard typing away, occasionally biting my lip or wrinkling my brow and… that’s about it. I get up and make myself a cup of tea from time to time. I ignore the phone when it rings. I don’t even listen to music when I write. It’s just me; tap, tap, tapping away.

I can imagine the host narrating the action in a low voice, “Ooo, it looks like she’s going with the adjective ‘quickly’ on this one. It’s a risky move, but let’s hope it pays off for her in the final revision round.” Not exactly the most dramatic or engaging television show ever created. In order to make it more interesting they’d have to do something along the lines of having writers work a thousand feet above a shark tank while they narrate stories in midair. Upside down. If the writers pause for more than twelve seconds they begin to drop and can only stop their descent into the shark tank by quickly continuing their tale. I’m glad I don’t need that degree of motivation to be productive, but it’s a show I wouldn’t mind watching.

I’d actually love to see a program like “The Prom Queens Wannabes” (the show from The Real Prom Queens of Westfield High) done in a less-invasive-and-horrific manner. Prom Queen Camp sounds like it should be a real place. A place that would make for some great television. 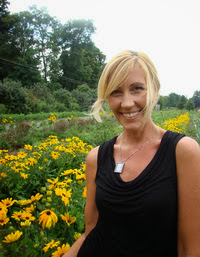 Laurie Boyle Crompton is the YA author of BLAZE (or Love in the Time of Supervillains) and THE REAL PROM QUEENS OF WESTFIELD HIGH (Sourcebooks, 2013 & 2014) as well as the upcoming ADRENALINE CRUSH from Farrar Straus Giroux. Laurie graduated first in her class from St. John’s University with a major in English and minor in Journalism. She’s written for national magazines like ALLURE as well as numerous trade publications and has appeared on Good Day New York several times as a Toy Expert. Yes, that is an actual thing that people sometimes get to be. When she’s not writing Laurie enjoys hiking, cycling, reading, cross-country skiing, running, going to the movies and drinking tea by the gallon. She lives near NYC, but loves to escape to the mountains in New Paltz, NY where she and her family can often be found climbing over rocks or tromping through the forest. She is represented by Ammi-Joan Paquette of the Erin Murphy Agency. 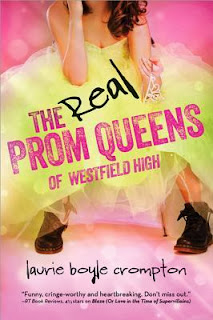 Shannon’s ‘clique’ is just her and her best friend and she has a super-embarrassing nickname that won’t go away. It is no huge shock when her classmates vote her least likely to be crowned Prom Queen. What is shocking is the new hidden camera reality show she finds herself starring in, titled The Prom Queen Wannabes! Shannon and two other Wannabes must battle to be elected Prom Queen and snag the One! Million! Dollar! prize. After a summer of makeovers and training at Prom Queen Camp, the hidden cameras watch the three of them enter their senior year equipped with secret skills to help wage war on the popular set. Things at Westfield High are about to get ugly, and Shannon must decide how much she's willing to give up for a shot at winning that tiara.