Sometimes I'm so wowed by a writer's ability to craft achingly beautiful prose or their ability to spin a story that keeps me up well past my bedtime that I can't help but think, "Man, I wish I'd done that." The books I've chosen here are novels outside of my usual genre stomping grounds (contemporary fantasy); they're realistic fiction, sci fi, and high fantasy. Will I write a contemporary/sci fi/high fantasy novel someday? Maybe, but right now, I'm happy living vicariously through the worlds these writers have created.

Shadow and Bone by Leigh Bardugo

I grew up on a steady diet of high fantasy, but at some point in my early twenties, I started to drift away from it. But then I found Leigh Bardugo, who reeled me right back in with her tales of Ravka in Shadow and Bone (and its sequel Siege and Storm). One chapter in, and I was completely captivated by Alina's path to self-discovery. Watching this character hack her way through the brambles of adolescence and first loves, only to get caught up in the quicksand of political intrigue and supernatural powers was a trip I'm glad I took. And I've developed an unhealthy villain-crush on the Darkling, who is deeply, problematically appealing. Ruin and Rising (out June 2014) can't come soon enough.

I'll admit, this book took me a while to get into due to my pathological aversion to physics. In high school, I elected to take AP Chemistry instead of Intro Physics (huge mistake) because I was so intimidated by the latter. But, in the strangest turn of events, Anna Jarzab made physics sexy in Tandem, a sublimely crafted story about parallel universes and secret identities. It has everything I could ask for in a book: a love interest I could crush on, a relatable protagonist, and an ending that made me legitimately scream when I reached the last page (I was home alone and it really freaked my cat out). I pretty much wake up every day asking if Tether, the sequel, is out yet, but sadly, I'll have to wait until June 2014 for it. That's gonna be a big month for me, emotionally.

When I read for pleasure, I usually gravitate toward sci fi and fantasy titles, simply because I like to escape my own world and get lost in someone else's. And that's why Fangirl, a contemporary standalone novel, speaks to me. The book's protagonist, Cath, is a lot like me. We're both writers more comfortable with fictional characters than real people, and I pretty much learned my craft by penning Harry Potter fan fiction in high school, much like Cath and her twin sister, Wren, did with Simon Snow. And like Cath, I was haunted by my own solitude freshmen year of college, only to find love with a boy with devilishly expressive eyebrows (it didn't work out for me, but I'm much more optimistic about Cath's chances). Few books have made me laugh and cry on such a deeply personal level that this selection is less "I wish I'd written this" and more "This is the story of my life and I'm glad someone wrote it." 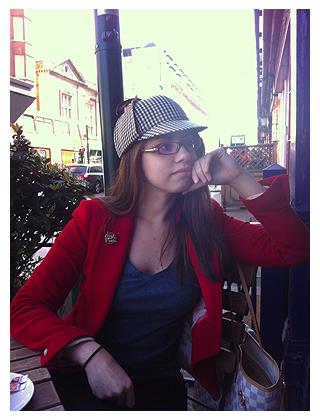 Melissa Grey penned her first short story at the age of twelve and hasn't stopped writing since. As an undergrad, she learned how ride a horse and shoot a bow and arrow at the same time, but hasn't had much use for that skill since graduating in 2008. Her debut novel, THE GIRL AT MIDNIGHT, will be published by Delacorte/Random House in spring 2015.


The first in a YA trilogy about Echo, a pickpocket runaway adopted and raised in New York City by a race of creatures with feathers for hair and magic in their veins. The series follows Echo as she becomes involved in an ancient war and a centuries-old love, and discovers startling truths about the world she lives in. - Publishers Weekly

Goodreads
Adventures in YA Publishing at 6:00 AM