Wish I'd Written by Seth Fishman

Here's the problem: we read for pleasure, we write with purpose. Maybe that purpose is relaxation, passion, drive, or the same pleasure you get while reading, but still, it takes motivation to sit down and write a novel, to spend months in front of a computer and more months editing. I believe we writers are a jealous lot. Not on purpose, though, more out of love and admiration. We unconsciously (or consciously) mimic our favorite authors, we are amazed at the skill, the ability of our peers. Some might say we 'borrow'. I, for one, have finished a number of books and just sort of sat there, wondering how they did it, wishing I wrote that book. It's a good thing. It drives us, it makes us better, it is the collective community of writers pushing each other to new heights. But still, gosh I wish I wrote these books.

Forthcoming: Red Rising by Pierce Brown (Feb)
You might have heard of this one already. It's getting buzz left and write. It is, legitimately, Hunger Games meets Ender's Game. In some ways, there's a healthy hunk of derivation in this book, but it's the kind of mimicry that can only be described as homage. Heck, I'd mimic this! It's the kind of book that I find myself daydreaming about (though, considering the intensity of the plot, that might sound weird). Brown takes all the things you desperately miss from HG and EG and brings them to his incredibly compelling world, a future where the solar system is colonized and humans have been broken into classes. Bigger, smarter, better are the Golds, rulers of everything. And the menial, the workers, the bottom: Reds. Yes, Red Rising makes sense as a title now, but what is wonderful about this is how very strong the Golds are, how ruthless and crazy and exactly what our Red hero has to accomplish to try to win for his people. Such an incredible book. The last one I stayed up 'til three am to finish in a long time.

Forthcoming: The Forbidden Library by Django Wexler (April)
This is Middle Grade, actually, but it's middle grade the way that Harry Potter was middle grade. A young character but with a writer so good at landing tight, almost scary scenes that you don't feel a whiff of ageism here. This is perfect for any BOOK lover. Alice is orphaned and sent to stay with her distant relative at his enormous manor and told, quite quickly, to stay clear of the library. The plot pivots on the idea that wizards/sorcerers get their powers from books, and are called Readers. Alice finds herself sucked into books where she's forced to defeat whatever lurks inside to say alive. But if she succeeds, she earns the power of whatever she defeated, such an amazing trick of the game. This is the kind of book your younger brother or sister might get as a present but you find yourself stealing. It's a 5 book series, so there's a real chance we get to age with the characters, too!

Something Like Hope by Shawn Goodman
In the realist YA category, this is one of the most moving books I've ever read. Sometimes I feel like I need these types of books, the ones that make me cry and that I read slow so they don't end. I wish I could instill that kind of feeling whenever I write. Shawn, the author, worked for years at juvenile detention centers and writes an uplifting tale about a young girl who's stuck behind bars and the awful conditions that exist there. Guards abuse inmates, her friends hurt their chances at a new life, and Shavonne's stuck, trying to find a purpose to life, a way to even live in such an unfair world.

Seth Fishman was born and raised in Midland, Texas (think Friday Night Lights) and received his MFA in Creative Writing from the University of East Anglia in Norwich, England (think cold and rainy and millions of castles). His YA thriller, The Well's End, is the first in a series and the protagonist, Mia Kish, is roughly inspired by a hometown drama that really blew him away

When not writing, Seth is a literary agent at The Gernert Company, and thinks writing and agenting are the two very best jobs in the world. 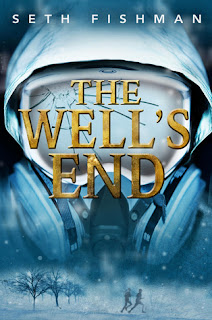 A deadly virus and an impossible discovery unite in one enthralling can’t-miss read...

Sixteen-year-old Mia Kish has always been afraid of the dark. After all, she’s baby Mia, the one who fell down a well. That was years ago, though the darkness still haunts her. But when her classmates and teachers at ritzy Westbrook Academy start dying of old age from a bizarre and frightening virus that ages its victims years in a matter of hours, Mia becomes haunted by a lot more than the dark. Their deaths are gruesome and Mia worries she and her friends may be next. In order to survive, Mia and her small crew must break quarantine and outrun armed soldiers in hazmat suits who shoot first and ask questions later.

And there’s only one place to go—the Cave, aka Fenton Electronics. Mia knows it’s somehow connected and hopes her dad, Director of Fenton Electronics, who has always been strangely secretive about his work, has the answers she needs, and more importantly a cure to save everyone before the whole town succumbs to the mysterious virus. Unfortunately, it’s not answers Mia discovers, but something far more treacherous and impossible than even the virus itself.

A high-stakes, fast-paced adventure with imagination and heart.