Inspired Openings: Make Your Book Worthy of Your Reader's Time by Victoria McKernan

Victoria McKernan's books all have an underlying theme of water, and that is attributed to her years as a scuba diving instructor and her experiences travelling the globe. Her newest YA book, SON OF FORTUNE, came out in November 2013 and she is the author of the award winning book SHACKLETON'S STOWAWAY, and we are very excited to have Victoria here today!

Make Your Book Worthy of Your Reader's Time by Victoria McKernan


Opening lines are fun - (you are reading this thread after all) - but with a few exceptions, they're really only important in the negative. Meaning - A bad opening can kill you, but a great opening just gives you a little more time to prove yourself.

It isn't like figure skating, where nailing the opening triple Axel - double Lutz - double salchow combination can carry you to a medal despite a mediocre rest of the program because of the points for difficult jumps. Great first lines are just that - great first lines. Advertising pitches and cheesy pick-ups are all about first lines. I enjoy a good opening, and work hard to write them, but I never trust them.

Remember that before a reader even gets to the opening paragraph, she already has a lot of information about your book. If she is simply browsing in a bookstore, the cover art, jacket description and blurbs immediately introduce the genre, the characters and the basic story. If she is seeking out a specific title, it's because she has read a review or heard about it from a friend, or from social media. In this case, she has already Googled it and chances are she is on Amazon. In either case, a bad opening might make her click away or shut the book, but a good opening will keep her reading for another page or two. That is where you must shine. Actually, you must shine for the entire rest of the book, but there is no way she will know that if those first few pages are weak. You don't have to sweep her off her feet, you just have to intrigue her, or at least not make her run in horror. (Or worse, in boredom.)

You are asking the reader to give you eight- ten or more hours of her life. You need to be worthy of that. Remember that books are cumulative and over a million new ones are published every year. Although I think my own novels add something new to the mix, I realize that if no other books are ever published in the rest of time there are already enough great books in existence to satisfy all readers forever.

The one case where a killer opening does matter is for books that may be quirky or outside traditional genres. Ask a Tom Clancy fan if he wants to read a non-fiction book about the invention of fertilizer and he may well bonk you in the head with his latest thriller. (Which at Clancy poundage is a significant blow.) But give him this opening -

"This is the story of two men who invented a way to turn air into bread, built factories the size of small cities, made enormous fortunes, helped engineer the deaths of millions of people, and saved the lives of billions more." and he will be intrigued. In fact The Alchemy of Air by Thomas Hager does indeed read like a thriller, but without that hook I think few casual browsers would even consider reading it.

If the reader is a young adult, he probably knows about your book because it is already popular, is in the same genre as the already popular books, or is on a school reading list. If he is an enthusiastic reader, or has enthusiastic parents or teachers, he might be exposed to something new. But If he is an indifferent reader, (more likely) he might be choosing a book simply because it is the shortest, or seems the least boring on the list.

My YA novels are historical adventures - which unfortunately is not a genre - so they come up as just historical - which immediately means - boring! Here are some comments from Goodreads about my novel "Shackleton's Stowaway."

So, I read this book for a school project (and those kind of books are never good) but I actually really enjoyed it.

* * *
I chose this book because I had it as an option in science for Mrs. Brinkerhoff's class. At first, when I picked up this book, I thought it was going to be one of those same old books. Educational and such. But it turned out to be a pretty good book! True story too!

* * *
Being a teenage boy, we don't really like reading at all, so were not the best of readers. But this book was a nice book for me, because it was a very easy book to fallow! I recommend it to a lot of people that have time to sit down and read it!

And for "The Devil's Paintbox."

I really enjoyed this one, especially as I'm not usually a fan of the western genre. Okay, maybe that's because I haven't read very many westerns. But let's just say that after reading Shane for a lit and film class in college, I wasn't exactly turned on to the genre.

Whether eager or reluctant, many readers only look at books in a preferred genre - fantasy, Sci-fi etc. A Sci fi novel about a space ship that lands on earth, captures all the young men, takes them to a distant planet and enslaves them to quarry rocks into a dust that the aliens need to survive, would capture the audience in a minute.

That actually is the plot of my new novel Son of Fortune, except the "aliens" are 19th century slavers kidnapping Chinese men and forcing them to mine Guano, a fertilizer that saved half the population of earth from starvation. The ordinary world of the 1860s is as dystopian as the Hunger Games and bizarre as any inter-planetary future, but I only have maybe five minutes to show the reader that. So here is another instance when a good opening matters.


"Aiden Lynch walked off alone into the night forest. He had no real idea where he was going, but his body needed to move so he went along with it. He had slipped past exhaustion into a restless exhilaration that demanded motion. The path was faint, but as long as he walked west he would come soon enough to the sea. The sea offered escape, and he needed escape, for he had just killed a man. The stain was still on him. The blood had soaked through his coat and through his sweater and the shirt beneath that and onto his skin where it had dried and itched for hours: a rude smear, crisp and foul like a smashed bug. "


The opening is also a little more important when you are trying to hook an agent or editor, for they are the only ones who will ever read the book in "virgin" form, knowing nothing more than what you have given them in your proposal and sample chapter. But even in this case, going back to the figure skater analogy, they are professional judges. They are going to watch the whole 4 minutes and consider all the elements. They are looking for muscular language, interesting characters, a fresh plot and a voice that feels compelling and true. OK - honestly - they are looking for a saleable commodity - A book club book; a vampire book; a stunning first novel written by a pretty young thing; a novel celebrating triumph over - (choose your adversity.) But as cynical as that might sound, good writing and saleable are not mutually exclusive and editors are hungry for the perfect mix. They aren't going to decide that based on a good opening, but it won't help if you make them cringe.

Besides, the best book opening - "It was the best of times, it was the worst of times" - has already been used. 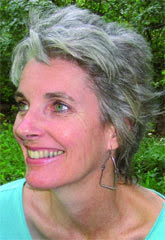 Victoria McKernan started traveling at the age of eighteen and spent many years working her way around the world, hitchhiking and sailing. She graduated in 1982 from George Washington University with a BA in theatre. Since learning to scuba-dive on Australia's Great Barrier Reef, she has worked as a scuba instructor, underwater model, and divemaster on several ships. She lives in Washington DC with a dog, two cats, and a boa constrictor.

She has written four mystery/thrillers for adults, all of which feature underwater adventure. Her most recent adult novel, THE MOSQUITO WAR (under the name of V.A. MacAlister - Tor, 2001), deals with international conspiracies to control a cure for malaria that comes from an underwater plant. 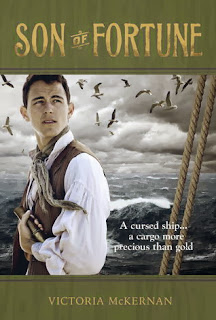 Aiden Lynch is a survivor—only 16 years old, he's seen himself through near-starvation on the Kansas prairie, a brutal journey on the Oregon trail, and backbreaking work in a lumber camp. Now he's reached the glittering city of San Francisco, and though his future is uncertain, promise lies ahead. Luck seems to favor him as he manages to stay one step ahead of trouble, even in the city's notoriously dangerous Barbary Coast. And it is pure fortune that leads him to a wealthy family, and then the high-stakes poker game in which he wins a ship—fully outfitted and ready for trade. The trade he has inherited: importing guano, a highly potent fertilizer, from island mines in Peru.

But what he finds in Peru is a savage business—conditions at the mines are unthinkable, the workers forced into servitude. When Aiden becomes involved with a miner who claims to be a kidnapped Chinese nobleman, all his loyalties are called into question, and he's plunged into a dangerous game.