I love the concept of “Wish I’d Written,” because, if I’m being honest, I think about it with almost every book I read. I generally read books recommended to me by a friend, a fellow writer, a bookseller, or a librarian, so it’s rare for me to spend time with a book that simply doesn’t work. The point is, I wish I’d written a whole heck of a lot. But among my recent reads, there are standouts:

Crash and Burn by Michael Hassan (Balzer + Bray, 2013)
Okay, full disclosure. When Egmont, my publisher, was finalizing the cover for The Scar Boys, they solicited blurbs from authors. The only author to respond was Michael Hassan, author of Crash and Burn. Only, I’d never heard of Michael and had never heard of the book. Panicked, I rushed out to Posman’s, the indie bookstore in Grand Central Station, and bought myself a copy. And here’s the thing: it’s brilliant.

It’s the story of how Steven “Crash” Crashinsky saves his high school from David “Burn” Burnett. Crash is telling the story of their complicated relationship and how it led to that one fateful day when Burn laid siege to the school. The characters and their relationships to one another are incredibly well drawn and the story never stops moving (finishing with an edge of your seat climax). But that’s not why I wish I’d written this book. I wish I’d written Crash and Burn for two reasons: 1) It’s a masters class in writing voice. Crash, the narrator, is pitch perfect. And 2) it captures the current generation of teens better than anything else I’ve read – be warned, it is rife with sex, drugs, and violence, and is not for younger readers. It took real courage for Hassan to write this, courage I hope to emulate in the future.

Fangirl by Rainbow Rowell (St. Martin’s Griffin, 2013)
I kind of want to cheat here and say that I want to be Rainbow Rowell, rather than say I want to write one of her books. The reason? Both Eleanor and Park and Fangirl are So. Freaking. Good! But since cheating doesn’t generally pay, I’ll choose Fangirl.

Gun to my head, I probably enjoyed Eleanor & Park as a read better, but Fangirl has stayed with me longer. It’s the story of Cath, a freshman English student who is also a widely acclaimed writer of fan fiction. Cath has trouble adapting to life at college, wanting instead to be home with her father, a kindly soul who suffers from mental illness. This is a love story, a coming of age story, and a love letter to writing. What I like most of all, what I wish I’d written, is the story within the story about Simon Snow. Snow is a Harry Potteresque wizard, and Rowell does a masterful job in capturing the spirit of Harry Potter while writing something completely original. The story within the story is absolutely compelling, and I wish it had come out of my pen, er, computer. 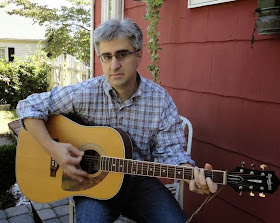 Len Vlahos is the Executive Director of BISG (Book Industry Study Group) and the former COO of the American Booksellers Association, where he worked for the past 20 years. Len has also worked in numerous bookstores, was an on-air personality for a commercial radio station in Atlantic City, and worked for a time for Internet marketing guru Seth Godin. THE SCAR BOYS is his first book.

You can visit him online at www.lenvlahos.com and on Twitter @LenVlahos, and on Goodreads 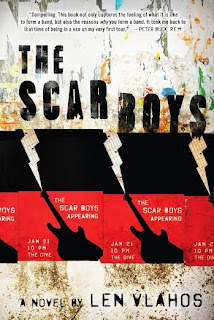 A severely burned teenager. A guitar. Punk rock. The chords of a rock 'n' roll road trip in a coming-of-age novel that is a must-read story about finding your place in the world...even if you carry scars inside and out.

In attempting to describe himself in his college application essay--help us to become acquainted with you beyond your courses, grades, and test scores--Harbinger (Harry) Jones goes way beyond the 250-word limit and gives a full account of his life.

Be sure to check out all the stops on THE SCAR BOYS blog tour:

Thurs, Jan 23
Adventures in YA Publishing


Rock on with THE SCAR BOYS playlist on Spotify:

Len is visiting 20+ cities and bookstores around the country--and he’s bringing his guitar. His tour schedule is here.

Giveaway!
One lucky winner will receive a copy of THE SCAR BOYS (U.S. addresses).