Dyan Sheldon is a prolific YA writer, and wrote the much loved CONFESSIONS OF A TEENAGE DRAMA QUEEN series. ONE OR TWO THINGS I LEARNED ABOUT LOVE has been rereleased in North America and already is a big hit! Please welcome Dyan Sheldon!


Make Your Opening Line A Juggernaut by Dyan Sheldon


You can’t judge a book by its cover, but you can’t judge a book by its first line either. One of my all-time favorite novels is Mark Haddon’s THE CURIOUS INCIDENT OF THE DOG IN THE NIGHT-TIME, and yet its opening sentence is: “It was 7 minutes after midnight.” Although informative – and although it does give you an important clue as to the nature of
the narrator –it’s not exactly a grab-you-and-shake-you first line. You wouldn’t immediately
think, Wow this is going to be a totally awesome reading experience. In fact, there’s a really good chance that you’d have forgotten it before you reached the third chapter. But chances are you would quickly reach the third chapter, because it is a pretty awesome reading experience and a book that’s very difficult to put down.
Nevertheless, despite the unreliability of a novel’s opening in determining what the rest of it
will be like, I do love a great first line. The kind that makes you sit up a little straighter or feel
that trill of excitement because you realize you’ve found something special – a book you’re really going to enjoy. The kind of first line that you never forget.
For that, you need look no further than Patrick Ness, a master of the truly brilliant opener.
This, for instance, is from THE KNIFE OF NEVER LETTING GO: “The first thing you find out
when your dog learns to talk is that dogs don’t got nothing much to say.”  He immediately has your attention. He definitely immediately had mine. Where are we? Whose dog is it? Why is it talking? What did it say? The possibility of boredom seems very far away. In Mr Ness’ most recent novel. MORE THAN THIS, the first line is equally arresting: “Here is the boy, drowning.” Once again, attention grabbed and held onto very tightly. You have to read on because you have to find out what’s happening. Who is the boy? Why is he drowning?
Similarly, the first sentence in Terry Pratchett’s JOHNNY AND THE DEAD is: “Johnny never knew for certain why he started seeing the dead.” He sees the dead? you think. Where? Why? Which dead?
I’m going to end with a first line that when I first read it hit me like a juggernaut. I’d
never read anything like it before – nor as it turned out, had a ever read like the book from which it comes. And this is it, my very very favorite first line from ONE HUNDRED YEARS OF SOLITUDE by Gabriel Garcia Marquez: “Many years later, as he faced the firing squad, Colonel Aureliano Buendia was to remember that distant afternoon when his father first took him to discover ice.” Now that’s a beginning! Dyan Sheldon is the author of many novels for young adult readers, including the #1 New York Times bestseller CONFESSIONS OF A TEENAGE DRAMA QUEEN, which was made into a major motion picture. American by birth, she lives in North London. 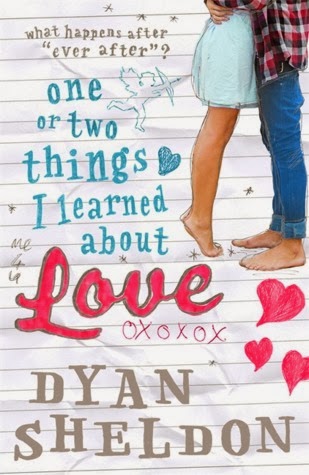 A wise, sometimes hilarious, always witty new novel from Dyan Sheldon, in which our heroine learns that "love" is not always what it seems...

Hildy D'Angelo is seventeen and this is the summer she falls in love for the first time. She isn't what you'd call experienced when it comes to boys, but Connor is good looking, smart, charming and sweet (with a melt-that-ice-cap smile). Hildy is a sarcastic and funny, down-to-earth girl with lots of friends, and yet she proves to be a little bit of a fool for love. When Connor uses the L word, Hildy, already half in love with the idea of falling in love, releases her hold on the Earth. And because it's all very new to her, she thinks that Connor's irrational bursts of jealousy are signs of affection. Teething pains. No big deal. She ties herself in knots trying to appease him and not let on to her suspicious friends (or herself) that there is anything wrong. Until, finally, poor tortured Connor goes a step too far - and Hildy sees the truth at last...