Craft of Writing: The Power of Writing With My Teenage Son as Co-Pilot by Lynn Joesph

Today's guest author has been writing books for years. Her latest one, FLOWERS IN THE SKY, came out back in March and today she is with us talking about writing a book with her son! Please welcome Lynn Joseph!


For the past two years I have been writing a Young Adult novel with my teenage son, Brandt. It started as a “project” when he told me there was nothing wrong with clicking the Like button on Facebook posts if he hadn’t actually written or posted the “funny,” disparaging, or straight up hurtful comments and photos that were carelessly bandied about by his 900 friends--real people he knew, not just unknown facebook associates.

My pointing out how demoralizing these Likes can be, and how an allegedly innocent Like could have detrimental effects, triggered an on-going intellectual and philosophical discussion between us of a teenager’s responsibility to himself, to his friends, and to those who are under attack. He countered with his concern of not disrupting the “status quo,” and the danger of himself being ostracized if he spoke up and criticized the masses. I found that difficult to swallow as he was one of the most popular kids in his high school. Me, a bookworm, who had spent most of her high school years writing and hanging out with the smart and “gifted” kids, could not begin to understand how Brandt’s favored status in academic, athletic and social circles could possibly be threatened.

Nevertheless, as a parent, I had a responsibility to guide him in considering the long term effects of his present day actions. And I did not want to do it by preaching or lecturing or even showing any judgment at all. That’s when I thought about what we writers of young adult books are trying to do every day: present challenging situations which force our protagonists to question themselves, open their eyes to life outside their immediate circle, and hopefully experience some meaningful growth that will help them on a path to adulthood armed with a bit of the knowledge and wisdom we ourselves have gained over our years. How to do that without sending blatant “messages” or making Brandt out to be a “bad guy” was my biggest issue.

That’s when I asked him to help me write a book. I wanted to present his perspective authentically. It did not start out as a publishable project, although it has now evolved into a full scale 55,000 plus word novel that is in its final (10th--ugh!) draft. But the evolution of the book has coincided with Brandt’s changing perspective and I recall vividly the day he came to me a year ago and said he got it. We had been arguing over whether our very popular and superstar athlete main character Max Fairchild would actually cry after a horrific thing had occurred. Brandt argued that Max would not cry. This went on for months.

Then, one day during a five week internship in another country away from all of his friends, and while Brandt was spending a lot of time working on the book, he came to me and said he had thought about it--he had put himself in the character’s shoes, he had considered all of the events, and yes, he agreed, Max would definitely cry. “He has to,” said Brandt. “He wouldn’t be human if he didn’t.” Bingo!
After crying a bit myself, I rejoiced. Because my job as a mother was DONE! Okay, not really, but a parent should celebrate the emotional maturity of their children as much as their first steps and words. To me this was an immense developmental milestone.

But what about me? What did I learn on this two-year journey?

First, I’ll admit that it’s a blessing to be the mother of this particular teenager -- a kid who agreed to write a book with his mother -- and to spend donkey hours talking about characters, scene development, the meaning of friendships, and writing and revising chapter after chapter until, as Brandt admitted just last week, “I never want to write another book if this is what writers go through. It’s torture.”
Yes, Brandt, welcome to my world!

The good news is that he has imparted his own wisdom as my teenage co-pilot on this book. Some of what he noted is stuff I thought I already knew, but to hear it from the horse’s mouth was enlightening and humbling. Here’s his list of “writerly” do’s and dont’s from a teenage boy’s perspective, in no particular order:

1. Don’t waste so much time on the parents’ issues. Yeah, they may seem important, but no, not really. A glimpse into the parents’ lives is enough for us.

2. Do focus on friends. A teenager’s life is ALL about his friends--or lack of them. Seriously!

3. Don’t use the “f word” to make your dialogue realistic. Be more creative. Calling another person “soulless” is highly effective. We teens would like to learn new ways to express disgust other than cursing people out. It’s genius to come up with expletives that are not based on the “f word.”

4. Don’t over write or over dramatize a scene, we’ll just roll our eyes. Less is more.
On the other hand, don’t be so vague in an attempt to be cute or “stylistic” so that we can’t tell who’s speaking or what’s going on. It’s annoying.

5. Do include some references to sex. Teenage boys think about sex ALL the time--and with most girls. Does not need to be explicit, but recognized.

6. Don’t end a story abruptly. If you’ve got us hooked, spend time writing a great, satisfying ending. It does not have to be a big surprise but it has to be rewarding for us after going through your entire book. Don’t let us down, we’ll be pissed!

7. Boys don’t cry as much as you writers like to make out. Crying is not how we show we have feelings or that we care. Sometimes anger is more believable. When we’re upset we get angry.

8. Don’t have a character do psycho stuff unless he’s really a psycho.

9. Do get the story started quickly. Faster than that if you can.

10. Do place a lot of scenes in the school cafeteria, at parties, pizzerias, yogurt shops, or other hang outs. Kids spend a lot of time socializing. It’s reality.

11. Watch your attempts to try and be cool.

12. Don’t use “dude” unless you’re writing about a surfer. Don’t use “doofus” or “dickwad” --too 1980’s unless your book takes place then. Basic “asshole” or “jerk” are fine and timeless.

13. Teens are people, too. We have feelings--all kinds--we just don’t show them the way you do. Please find original ways to express our emotions.

14. Most teenagers have jobs. Do show your teen characters dealing with bosses and other people at their workplace. It’s a whole other dynamic.

15. Do include interesting girl characters. Not all cheerleaders are cool. Flag twirlers are hot. So are class presidents and team captains. Weird girls are the best.

16. Do have kids using their phones for texting, taking pics, for everything! Our phones are part of us, and most guys carry their phones in their hands. That means one hand is always occupied. Just don’t forget the phones.

17. Don’t insert a lot of song lyrics in your book. Listening to music to inspire your writing is great, but when the song lyrics start popping up as text, it is distracting and can take readers out of the scene because we’re trying to recall if we know that song, and how it goes, and so on. If you’re using a lyric for something make sure it’s absolutely essential to the story.

19. Do be REAL! We can tell when your characters are being forced to do something that is totally phony and directed by the writer as opposed to what he or she would actually do.

20. Road trips in the middle of a story can get annoying. It’s just a way for authors to write about their favorite spots as opposed to hashing out the conflict realistically where your characters already are. Not for nothing The Breakfast Club managed to reveal so much in one single room: a library!

So, there you go. Most of these tidbits were directed at me. I admit to being prone to song lyrics, vague “cute” writing, characters crying too many tears, using outdated slang, ending the story abruptly, and inserting more than one “road” trip. Brandt slashed ruthlessly through my writing with his finger on the delete button. He especially got rid of my “f words.” He challenged me to write the entire book without using it once.

Thank goodness, this journey is almost over. I am so ready to write my high fantasy novel about a teenage shark god who eats people and curses up a storm! Kudos to Brandt for hanging in there though. The best part of writing this book together is finishing what we started.

Lynn moved to Baltimore, Maryland when she was 10-years-old but she returned to Trinidad for three months every summer. She lived two separate lives: an American school life and a Trinidad summer life. Lynn began writing because she missed Trinidad so much and most of her books take place there. 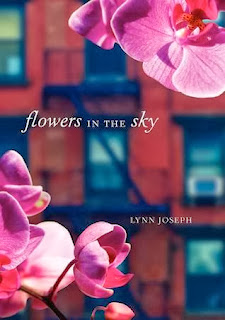 Fifteen-year-old Nina Perez is faced with a future she never expected. She must leave her Garden of Eden, her lush home in the Dominican Republic, when she's sent by her mother to seek out a better life with her brother in New York. As Nina searches for some glimpse of familiarity amid the jarring world of Washington Heights, she must uncover her own strength. She learns to uncover roots within foreign soil and finds a way to grow, just like the orchids that blossom on her fire escape. And when she is confronted by ugly secrets about her brother's business, she comes to understand the realities of life in this new place. But then she meets him-that green-eyed boy- who she can't erase from her thoughts, the one who just might help her learn to see beauty in spite of tragedy.

From the acclaimed author of The Color of My Words comes a powerful story about a young girl who must make her way in a new world and find her place within it.