Craft of Writing: The Do's and Dont's To Crafting A Book by Mariah Fredericks

Mariah Fredericks has been writing for years, and her latest book THE SEASON OF THE WITCH, takes place in a New York City private school, and I have a mad love for private/boarding school books. Add in a little supernatural aspect, and you have one book that will keep you hooked. We are so excited to have Mariah on with us today to talk about her writing process!

The Do's and Dont's To Crafting A Book by Mariah Fredericks


I really like the subject of this blog: The Craft of Writing. There are many books out there on the ART of writing. But I’ve never been comfortable with the word ART. Too much pressure. To me, ART implies genius. Transcendence. A mystical state of heightened insight and boundless creativity. There is no way I can put my butt in a chair and create ART on a regular basis.

CRAFT, I can handle. Craft implies effort. Patience. Screwing up. Fixing mistakes. No—first recognizing mistakes, and then fixing them. There is something reassuringly mundane about craft. You don’t have to be a genius to craft something good. You just need a modicum of skill, stamina, and the ability to be honest about your work.

I have been a full-time writer for ten years. I’ve written ten books that were published—and several that were not. I can’t tell anyone how to write well. But I know a lot about what it takes to get your butt in the chair and the words on the page.

Write on a regular basis. Daily, if possible. For many years, I had a full time job and I still wrote a page a day. Think about it. 365 days means you could have enough pages for a book by the end of the year.

For most of us, writing requires us to be in good creative shape. I often think of writing a book like running long distance. That first run after a long time of no exercise feels absolutely dreadful. You’re panting, there’s a stitch in your side, and everything hurts. You think oh, my God, I am NEVER doing this again. I must be doing it wrong if it feels this bad. I just cannot do it…

Then the next day feels a little looser, the next day even better, and after a while, you’re off and running. When the writer’s cramp comes, you have the experience to know that these pages, this scene, this chapter, may suck. It will have to be rethought and rewritten. But you keep going.

Find a good vein. You know the phrase, “Writing is easy. You just find a vein and open it”? True, but you have to find a gusher. An idea or an experience or characters rich enough to keep you obsessed for however long the project takes to finish. Back when I was trying to figure out what kind of writer I was, I wrote a few books that I thought might sell—but the subjects didn’t really fascinate me. Getting the feelings on the page felt like squeezing and pressing for each measly drop of authentic drama. When I’ve picked the right story, it just flows in wonderful, messy, spurts.

So, how do you find the right story? For me, a good place to start is: What pisses me off? I find bad behavior endlessly interesting. Since I write YA novels, I go back to teenage experiences where someone did someone wrong, and I try to unravel why they—or I—did that weird, stupid, rotten thing. I can muck around in people’s weird, ugly feelings all day long. It never gets old.

For other writers, the subject that fascinates them it might be a love object. A fantasy. A world they want to live in, only it doesn’t exist. Look for the right vein. You’ll know when you’ve found it.


Okay, I’m back. But the point is, if the sheer length of a project seems daunting, break it down to as little as you can comfortably do in day—while still finishing the thing before you’re ninety. When I’m starting a book, I try to write two pages a day, and that’s IT! No more. Only when I’m really rolling or in rewrite mode do I tackle more than that.

Write badly. Or rather—be okay with writing badly. Because you will write badly. Everybody does, a remarkable amount of the time. I once wrote a book in which every scene was dull, unfelt, and awkward—except one. That one scene kept me connected to that book until I was able to find my groove with the rest of the story.

Writing badly is better than not writing at all. Expecting yourself to be brilliant—to create ART—on a regular basis is setting yourself up for failure. I’m going to quote Jennifer Egan here, because she is truly a brilliant, artistic writer, so if she says you should write badly, you know it’s true…

“You have to give yourself permission to [write badly] because you can’t expect to write regularly and always write well. That’s when people get into the habit of waiting for the good moments, and that is where I think writer’s block comes from. Like: It’s not happening. Well, maybe good writing isn’t happening, but let some bad writing happen. Let it happen!”


So get comfortable with your bad writing. Be confident that you can rewrite your way out of anything.

Rewrite, rewrite, rewrite. There’s nothing more fun than rewrites. I love printing out the entire book, then making endless notes in the margins—What is she feeling here? Describe! Better!. Each note becomes its own project. You can spend a day on two paragraphs, slash whole pages that never worked, adjust a character’s attitude in this scene or that. If you like to write because you love being in control of an entire world and its inhabitants, this is your chance to tinker to your heart’s content. A dab of emotion here, a soupcon of humor, a little dash of physical description. A lot of my best writing has been rewrites.

Finish the book. This might seem like a big fat duh, but I know brilliant writers you’ve never heard of simply because they cannot finish their books. Finishing a book is difficult. It requires you to do something that’s extremely hard for a lot of writers, and that’s …


…letting go. If you want your work to be seen, at some point, you will have to be willing to say, I’m done here. No more rewrites. No more tinkering. The book has to pass from a fantasy that might somehow change your life to a reality—something to be read, assessed, critiqued, and hopefully…bought. (Then you have the joy of having it assessed and critiqued on Goodreads, but that’s a whole other story.)

Listen to everybody. Choose your readers carefully. It’s a rare reader who understands you and your work well enough to be both honest and supportive. Find a reader who loves what you love in your work—and is willing to say when it’s not there yet.

Ever since I was a teenager, I knew I wanted to be a writer. I also knew that success in a creative field is a long shot. So early on, I decided that if I didn’t achieve my dream of being a writer, I would at least be able to say I did every last thing possible to get there. I would write every day. I would finish my books, and I would send them to people who could publish them. If one book didn’t sell, I would start writing another. Finish that, and send it out.

And if I ever stopped loving writing, I would stop writing.

But I never have. So I’ve never had to. I wish you the same. 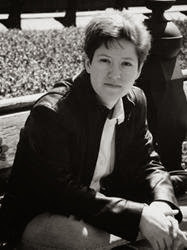 Mariah accepts that cats are her superior in every way and would never dream of insulting one by trying to own it. However, she has been reading tarot cards since she was a teenager, and while she knows that it is lame to believe in fortune-telling, her readings keep coming true, so she keeps doing them. She has even written a tarot guide called The Smart Girl's Guide to Tarot.

She lives with her husband, son, and basset hound in Jackson Heights, New York. 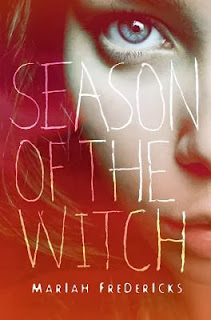 Like Fredericks's The Girl in the Park, here is a page-turner that perfectly captures the world of New York City private schools, as it explores the notion of power among teenage girls. Publisher's Weekly, in a starred review, raves, "Fredericks again proves her gift for conveying the intensity of adolescence, while exploring the ways girls’ sexuality is used against them and asking why 'we all have to be predators and prey.'"

Queen Bee Chloe is going to make Toni suffer for whatever transpired between Toni and Chloe's boyfriend, Oliver, over the summer. From day one of eleventh grade, she has Toni branded as a super slut, and it isn't long before things get so ugly that Toni fears for her safety. What's a scared, powerless, and fed-up teenager to do? Guided by Cassandra—a girl with some serious problems of her own—Toni decides to stop playing the victim and take control. Cassandra has been experimenting with witchcraft, and together they cast a spell on Chloe that may actually cause her death. Could Toni have really made such an awful thing happen?