Sometimes The Thing is Not THE THING by Patrick Flores-Scott

Today we have the debut author of JUMPED IN, the edgy and heartfelt contemporary that released this past August. Please welcome Patrick Flores-Scott!

Sometimes The Thing is Not THE THING by Patrick Flores-Scott

When you hand your pre-published manuscript off to a friend, partner, writer, agent, or editor for feedback, what you really want to hear is the following:
I feel honored and humbled to have been one of the first to lay eyes upon your masterpiece.

Your book took me on a journey inward, to the core of my own soul. It made me see that, sadly, something was missing. It taught me what that thing was and led me on a quest to find it. I am a better human being than I was before I read your book.

You should change your name to Lew Berry or Bashunul Nookaward. It’d be so cool if, when they announcements come out, your name rhymed with Newbery, or National Book Award.

That’s the junk I want to hear.

I recently submitted a draft of my second novel to my editor. My agent and I thought it was ready to roll. I thought the thing was primed. I thought it was Great American Novel-type stuff. (I’m not kidding.) I was walking around the house contemplating a name change... Drew Berry?

What I heard from my editor (who I hope all of you have the opportunity to work
with sometime in your career, because she’s fabulous and kind), was a bunch of stuff about how she didn’t quite connect with my main character, or his love interest, or their love story, and how his sister actually seemed like the protagonist etc. etc.

Disappointing? Yup. Yet, I know she’s right about everything she said. She’s right, not just because she’s right; she’s right because my novel will get better if I decide she’s right. I’m not saying that just because she stands between me and a contract.; the same rule holds true for my agent, my wife, my co-worker… I have to trust painful feedback (from folks I trust) and use it to improve my writing.
Problem: It’s really hard to give good feedback on a new, underdeveloped work. It’s difficult for me. It might be for you as well. Very few people—smarty-pants-big-shots included—are able to give the exact, detailed pearl of wisdom that will lead you directly to the holy grail of re-writes. They say stuff like, “I can’t connect to your main character.” And when you ask them why, they say things like, “Sam’s too depressed. He’s depressing. He’s going to depress the already-depressed teens of America.”

That’s what I heard repeatedly as my first novel, Jumped In, was being rejected by most of Manhattan.

My first inclination was to move on to the next editor until we found one who truly understood my genius. My second thought was that maybe, just maybe, a lot of people who’ve been in the publishing world for a long time might be right about this thing.

But right about what thing? What is the thing? Sam is too depressed? That’s not specific enough. Besides, Sam is not too depressed. I taught middle school and I know Sam. Sam is 100% real. Sam’s level of depression will not change!
But something had to change.

This is where I stumbled across my new saying. I think it’s awesome, and I hope you do too. Here it is: Sometimes the thing is not THE THING. (I’m gonna pretend you love it.)

What Sometimes the thing is not THE THING means is this: Because it’s tremendously difficult to give great, specific feedback on very new work, often the best folks can do is point at something that resembles THE THING, and tell you it’s the THE THING… but it’s definitely not THE THING.

When this happens, it’s your job to listen, to stay engaged with the giver-of-feedback, and say yes (even though you’re thinking HUH?). Then go off on your own and begin your hunt for THE actual THING.

In the case of Sam, I didn’t change his level of depression, but I did change him. I realized in my hunt, that although Sam wasn’t too depressed, he was missing that thing that would make folks want to root for him, even during his darkest, most self-absorbed times. Sam needed an interest, a passion, a powerful goal. So I gave him one. He didn’t become any less depressed. But he did become much more likeable. And the novel got way better.
And I got a book deal.

The thing—too depressed—was not THE THING. THE THING was a lack of passion and a goal. No one told me that. It was up to me to decide that those rejecters were right about the fact that there was a problem, but I was the one who needed to find it and name it correctly.

I have to give thanks to the Rejecters of Manhattan, for taking the time to give me feedback and ultimately helping me to make Jumped In a book that was ready to sell to just the right editor.

There it is. Remember that Sometimes the thing is not THE THING. That’s my simple advice to you. Give your early drafts to people you trust. In turn, treat their critical feedback, not merely as an opportunity for validation (you might be disappointed), but as an opportunity to explore your work. If you’re willing to dig and hunt, you might find that THING behind the thing that launches you toward a great revision.

Patrick was born in the foothills of the Cascade Mountains just east of Seattle and grew up wanting to be a basketball player. Unfortunately at the time, he had the body and athletic talent of an author.

I played the clarinet in band and became a drama geek in college. He went on to write and act in plays, including "The True History of Coca-Cola in Mexico.' He became a teacher and currently works with elementary school students who struggle with reading and math.

He live in Seattle with his wife, Emma and two little boys, Carlos and Diego. 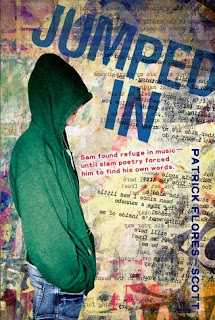 Sam has the rules of slackerhood down: Don’t be late to class. Don’t ever look the teacher in the eye. Develop your blank stare. Since his mom left, he has become an expert in the art of slacking, especially since no one at his new school gets his intense passion for the music of the Pacific Northwest—Nirvana, Hole, Sleater-Kinney. Then his English teacher begins a slam poetry unit and Sam gets paired up with the daunting, scarred, clearly-a-gang-member Luis, who happens to sit next to him in every one of his classes. Slacking is no longer an option—Luis will destroy him. Told in Sam’s raw voice and interspersed with vivid poems, Jumped In by Patrick Flores-Scott is a stunning debut novel about differences, friendship, loss, and the power of words.