Inspired Openings: Raise The Stakes in Writing Your First Line by Eric Devine

Today's guest author takes chances in his writing and creates fearless characters in bold and intriguing stories. His newest novel, DARE ME, came out in October and has pushed the limits on safe since. Please welcome Eric Devine!

Raise The Stakes in Writing Your First Line by Eric Devine


Writing a killer first line is everything. Without it, you will lose readers, especially in YA. The competition for your words is vast and slick, and is usually pressing into your readers' lives constantly. So how do you break through?

"There is, in any great opening line, a mini-conflict or tension that is strong enough to carry the reader to the next step in the narrative."
— Donald Maass

Enticing a reader is an act of promising that after this, the story only gets better. In Dare Me, my protagonist is not unique in that he possesses skills or powers or beauty. Ben is an everyman character, and so the trick was showcasing a conflict interesting enough that the reader would be willing to go for the ride.

First line: There is no doubt that one of us will die.

An old standby, the risk of death, but one that intrigues teens and fulfills the contract Maass suggests. Teens will want to read the rest of the opening in order to understand the situation Ben, and whoever else is with him, find themselves in. And this is where Maass provides additional insight about how to carry the story, step-by-step:

"If there is one single principle that is central to making any story more powerful, it is simply this: Raise the stakes."
— Donald Maass

This is a mantra that I cling to as I write, and is often offered by my fantastic agent Kate McKean as well. And I do it twice in the rest of the opening. The second line:

I’m not hoping for it, just considering the probability: three of us, ten stunts, each “death defying.”

With this, the parameters are set and the math crystallizes. What's the likelihood that all three friends are going to make it through ten, nasty stunts, unscathed? Pretty low. What's the likelihood of continuing if an injury—or worse—occurs? It depends. What's the motivation behind them? Because teens will do the insane, in spite of harm or risk, if there's enough pressure. Time to lay down the last "stake" card:

At least that’s the plan: spend senior year completing one dare a month. Why? So we’re legends by the end.

There it is. Tension and conflict via possible death, stakes raised by the volume and nature of the conflict, and stakes raised again by the motivation for completing the dares.

Awesome! I can just have these guys thwart death in increasingly crazy ways and that should keep the readers' attention, right? Yes and no.

"You take people, you put them on a journey, you give them peril, you find out who they really are." ― Joss Whedon

Certainly some teens would love to read a narrative of Jackass. But what point would that serve? What substance would be offered? How would we ever learn anything about who Ben and his friends are if I left it at that?

Therefore, my challenge with Dare Me, after writing a startling beginning, was figuring out how to create multidimensional characters who step back and ask: Why the hell am I doing this? I needed them to challenge the very premise of the novel and be willing to walk away, because that felt honest. What also felt honest is the pressure that would exist for anyone who did bail. Which peril would be worse: the dares or the fallout of not being man enough? And that is the element that keeps the story intriguing: the push-pull of the dares with common sense.

Ultimately, this is a story about friends with a strained relationship trying to come back together to leave a mark. What that means to each is different, and how Ben understands this is the key to the story. The reluctant everyman puts this craziness into perspective for the reader, not because he wants to, but because he has no choice.

I did not come to these questions and considerations easily. The aforementioned Kate McKean and my editor, Lisa Cheng, dragged me to them, because they demanded to know more about these boys. And they were right to want such. The boys, not the dares, are the heart of the story.

I think there is beauty in that killer opening, where the stage is set and everything feels like it could fall apart. But we must remember not to lose sight of the rest of the story, its layers and its soul, to not only focus on the hook. Offer more than the superficial that is so often all that exists in the YouTube clips, Facebook posts and Instagram comments that our audience devours.

Be brave at the start. Grab those readers! But once you've done so, be like my characters, step back and ask questions of yourself, especially: Why am I writing this? The answers may not come easily, but when they do, get ready, because that's when the real storytelling begins.

Consider the implications provided by these fantastic beginnings:

“The best day of my life happened when I was five and almost died at Disney World. I’m sixteen now, so you can imagine that’s left me with quite a few days of major suckage.”
––Going Bovine by Libba Bray

“The afternoon my parents died, I was out shoplifting with Irene Klauson.”
––The Miseducation of Cameron Post by Emily M. Danforth

"Before I died I hid my secrets in the Master Oak. This book is about my best friend, Vera Dietz, who eventually found them."
––Please Ignore Vera Dietz by A.S. King 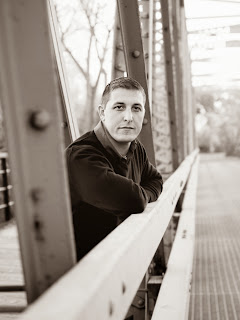 Eric is a high school English teacher, husband, and father of two girls and is the author of several fearless teen fiction books, Tap Out and This Side of Normal

He is represented by Kate McKean of the Howard Morhaim Literary Agency. 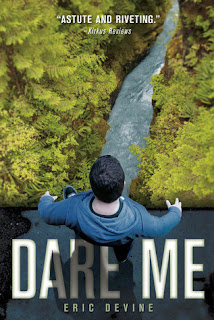 When Ben Candido and his friends, Ricky and John, decide to post a YouTube video of themselves surfing on top of a car, they finally feel like the somebodies they are meant to be instead of the social nobodies that they are. Overnight, the video becomes the talk of the school, and the boys are sure that their self-appointed senior year of dares will live in infamy. Every dare brings an increased risk of bodily harm, but Ben cannot deny the thrill and sense of swagger that come with it. The stakes become even more complex when a mysterious donor bankrolls their dares in exchange for a cut in the online revenue the videos generate. But at what point do the risk and the reward come at too high of a price? What does it take to stay true to one’s self in the face of relentless pressure.