Craft of Writing: Make Your Hero Complex By Choosing The Right Flaws by Angela Ackerman

Today we have an author and fellow blogger whose award winning writing resource website, Writers Helping Writers (formerly known as The Bookshelf Muse) with us with some incredibly helpful tips about character development. Please welcome Angela Ackerman!


Make Your Hero Complex By Choosing The Right Flaws


The best characters are those who mirror real people, ones who are complex individuals with a blend of strengths, failings, talents and flaws. Of these four components, flaws can often be the most difficult to figure out, because knowing which negative traits will emerge means digging into a character’s past to understand what negative influences and experiences helped shaped them, and what painful emotional wounds they bear as a result.

Flaws are unique because many form under the guise of “helping” a person. On the outside, they seem to protect in some way, keeping the character from re-experiencing a deep emotional pain that happened in his past (the character’s wound). Because of this, choosing which flaws best suit a character will have a big impact on the story and the character’s arc, because the hero’s negative side creates biases that leads to flawed thinking, actions and behavior. Flaws “pretend” to protect, but really all they do is trip the character up, hold him back and create friction in his relationships, making it hard for him to find true happiness and succeed.

Some writers tend to rush character development in their eagerness to get words on the page. They slap together a motley blend of flaws and send them down a rocky plot road to see what happens. And while this can yield some fascinating, out-of-the-box characters, this “spaghetti method” can sometimes rob a character of their depth.

When it comes to flaws, it is the WHY behind the negative trait that is compelling. A character can be irresponsible, or hypocritical, or a workaholic, but without the WHY, the reason this trait emerged, a reader is unable to connect with them on a deeper level. The WHY is what readers are drawn to, because it encourages the character to do some serious self-examination throughout the scope of the story, which will lead to self-growth.

So as we create characters, how can we discover the WHY behind character flaws? How can we determine which flaws are perfect for our character and which are not? Here are 5 tips to make sure each flaw you choose counts.

1) Make Friends With The Character’s Backstory

Backstory is seen as the writer’s F word, but the truth is, it’s one of the most important things in a writer’s arsenal. Understanding a character’s past and what events shaped them is critical to understanding who they are. Brainstorm your character’s backstory, thinking about who and what influenced him, and what negative experiences have come to pass. This is not so that you can dump a bunch of raw flashbacks and information lumps into your story to explain your character’s pain. Rather it is for you as the author, to understand what motivates your character, what he fears, and what needs and desires are important to him.

Past hurts leave a mark. Characters who have experienced emotional pain are not eager to do so again, and as a result, flaws often form to “protect” from future hurt. A man who loses his wife to an unfortunate infection picked up during a hospital stay is likely have biases toward the medical system. He may grow stubborn and mistrustful, refusing to see a doctor when he grows sick, or seek medical treatment when he knows something is deeply wrong. This wounding event (his wife’s death) changed who he was, affected his judgement and now makes him risk his own health. Had his wife survived, these changes would not have taken place. Knowing your character’s wounds help you understand how flaws form in the hopes that the character can protect himself from being hurt again.

In every story, there is a goal: the character wants to achieve something, and hopefully whatever it is will be an uphill battle. To ensure it is, think about what positive traits are perfect for achieving this goal, and then assign flaws that will work against him instead. This makes him work harder to subdue flaws holding him back from what he wants.

No character is an island, and so there will be others who interact or help him throughout the story. Look for flaws that will annoy and frustrate other characters, causing friction. The path should never be easy for a character, and they should stumble when it comes to relationships as well. This ensures they will fight for the people they really care for, even when it means looking within to make changes to allow for healthier friendships and interactions.

5) Mine from Real Life

The people we interact with day-to-day have flaws, as do we. Think about the people you know, and the minor and major flaws that trip them up, especially the ones they don’t seem to see or want to change. This highlights just how blind we can be to our own flaws, and will help you find ones your character might be blind to as well. If you are feeling really brave, take a look within and find the bits of yourself that don’t always cast you in the best light. This is no easy task, but it can bring about huge insights as to why these flaws are a part us, and how they hold us back. This will lead to you writing your character’s flaws more authentically. 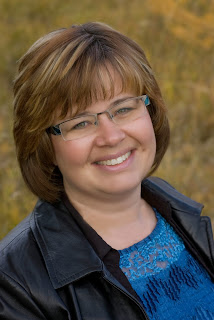 ANGELA ACKERMAN is the author of the bestselling writing guide, The Emotion Thesaurus, and most recently, The Positive Trait and Negative Trait Thesaurus books. Centering on the light and dark side of a character's personality, these new resource books help writers create layered, compelling characters that readers relate to and care for. Visit Angela's website, Writers Helping Writers for friendly support, description help, free writing tools and more! 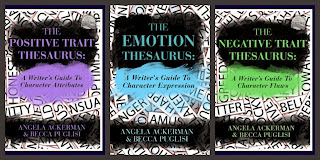 “In these brilliantly conceived, superbly organized and astonishingly thorough volumes, Angela Ackerman and Becca Puglisi have created an invaluable resource for writers and storytellers. Whether you are searching for new and unique ways to add and define characters, or brainstorming methods for revealing those characters without resorting to clichés, it is hard to imagine two more powerful tools for adding depth and dimension to your screenplays, novels or plays.”