Craft of Writing: Revamping A YA Classic by Geoffrey Huntington

Today's guest is the author of the beloved Ravenscliff series. First published in 2002, English speaking readers never had the chance to read book 3 in the series, BLOOD MOON. Now, with the re-release and continuation of the series, readers will finally get the chance to find out what happens. Please welcome Geoffrey Huntington!

Revamping A YA Classic


When Diversion Books announced they wanted to revive the RAVENSCLIFF SERIES, I was thrilled — but I also knew we needed to do a little advance planning. It wasn’t going to be enough to simply bring the books back. We were going to have to make sure they spoke the same language as today’s readers.

When SORCERERS OF THE NIGHTWING was first published by HarperCollins back in 2002, its readers —largely in junior-high and high-school, but we had a lot of adults as well — weren’t text messaging back and forth. There was no Facebook, Twitter or Instagram. Even mobile phones were big clunky gadgets, and not every one had one. The world was not nearly so interconnected as it is today. Globalization had certainly begun, but trends didn’t jump from one country to another quite as fast as they do today (which is, basically, instantaneously.)

So I knew that when new readers picked up Book 1 in the series, they’d wonder why Devon March, alone on a isolated stretch of beach in Maine, didn’t just pick up his phone and text his friends back home. It’s not so easy to set characters in isolated situations anymore. Mystery and horror writers are constantly trying to devise plausible scenarios that disconnect our characters from the rest of the world. For Devon, it was easy: there aren’t many places that aren’t covered by cellular networks, but Misery Point, Maine, could believably be one of them.

Still, he had to have that phone in his pocket. Otherwise readers would, quite understandably, be wondering where it was. So I had to bring Devon and his friends up to date technologically.

I also had to bring them up to date socially. At fifteen and sixteen, Devon and Cecily weren’t going to be quite as shy, peeking around corners at each other, as they were originally. Teenagers are much more forward and confident in dealing with each other these days. And while Cecily had always been very forthright, she needed to be even more a young woman of the second decade of the twenty-first century. Cecily knows what she wants and she’s going for it, and no one’s getting in her way.

Likewise, their friend Marcus, who’s gay, wouldn’t be quite as discreet about it as he had been in the original books in 2002. There’s no reason for him to be anymore. To be an authentic gay teen in 2013, Marcus had to be completely integrated into the world around him. His friends see little difference between his world and theirs.

So updating the books to bring them into sync with the times was the first step. The second was letting the diaspora of Ravenscliff fans all over the world know that the series was coming back. When Book 3 failed to come out in the U.S., I received literally thousands of emails and letters asking what had happened. Readers felt cheated, and I didn’t blame them. But there was nothing I could do. The original publisher, ReganBooks, an imprint of HarperCollins, had gone under, and other American publishers were leery about picking up a series in mid-run, even though the Ravenscliff books had done quite well, reaching all around the globe, translated into more than ten other languages. A handful of European publishers—including in France, the Netherlands, and Poland—had contracted for three books, so they went ahead and published Book 3 BLOOD MOON. That left English-language readers in the U.S., U.K., and elsewhere crying foul, lamenting the fact they’d never learn who was behind the wall at the end of Book 2.

In the meantime, I moved on to other things, and the original Ravenscliff readership grew to adulthood. The emails still came, asking if the series would ever be revived, but as the years went by, they declined in number (though I was still getting the occasional inquiry every few months even up to the beginning of this year.)

So when the offer from Diversion Books came in, we were faced with the daunting task of letting those many, many readers — those devoted fans of Devon March — know that their favorite series from their childhood and young adult years was finally back. I’d kept every email I’d ever received, but an email blast quickly revealed that three-quarters of those addresses were no longer active. So we took to Twitter and Facebook and various other ways online to get the word out. Although our goal was — and remains — to win a new generation of readers, we also knew that our base would always be those fiercely loyal fans who had never given up, who had always hoped to one day read the further adventures of Devon March.

And how gratifying it’s been to get responses from those readers on Facebook and Twitter! I’m hearing from people who are simply overjoyed that the series is back. English-language readers are chomping at the bit to finally get Book 3 — while French and Dutch and Polish and Belgian readers are already asking for Book 4. (They know who’s behind the wall and want to know who Devon sees at the end of Book 3.) Let’s hope that enterprising publishers in those languages step forward to publish the continuing series for those loyal fans. I don’t want to leave anyone behind ever again!

Thanks for helping us get the word out that RAVENSCLIFF IS BACK. Our Twitter following (@HuntingtonGeoff) is growing slowly but surely as word spreads. Diversion Books has been so wonderful in this process, and the covers they’ve designed are awesome. We can bring the series back better than ever! Let’s get Devon back out into the world so he can finish his hero’s journey through all TEN proposed books, discovering who is, where he comes from, and what his great destiny is supposed to be. 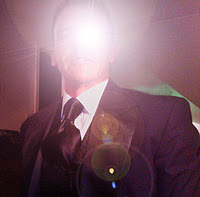 Geoffrey Huntington lives in a house by the sea near to the place where, three hundred years ago, a pirate ship sunk below the waves. The screams of the doomed men can still be heard from Geoffrey's window on windy nights. As a boy, Geoffrey became fascinated by the world that exists on the other side of our own. His inspirations and influences have always been a myriad lot. Lovecraft. Tolkein. Buffy. Harry Potter. Quantum Leap. The original Dark Shadows. The Turn of the Screw. Alfred Hitchcock. The Twilight Zone. The X Files. Dr. Who. Bram Stoker’s Dracula. Marv Wolfman’s Dracula. Nosferatu. James Whale’s Frankenstein films. Anne Rice. Stephen King. Tod Browning’s Freaks. The Exorcist. The Blair Witch Project. The Grudge. Silent Hill. Lara Croft. Indiana Jones. Star Wars. Star Trek. Under other names, Geoffrey writes suspense and horror novels as well as many works of nonfiction. 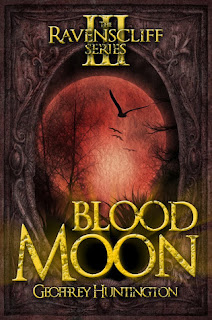 The mystery of the Tower at Ravenscliff is at last revealed, in the long awaited continuation of The Ravenscliff Series.

A returning threat roams the halls of Ravenscliff Manor, the mad sorceress Clarissa, but she is only one of many problems facing Devon March. His budding relationship with Cecily takes a hit when he discovers she might be his (gulp!) sister, while his pal Marcus is mysteriously linked with the savage, gorilla-like beast that turns up in Misery Point on nights of the full moon.

The only way to solve these mysteries is to take another trip down the Staircase Into Time, with Devon emerging at the Ravenscliff of thirty years ago. A time when his guardian Amanda and the mysterious Rolfe are toddlers, and the Madman, Jackson Muir, is very much alive.