WOW Wednesday: Hanging Out with the Right POV by Mindy McGinnis

Today on WOW Wednesday, we are incredibly excited to have the author of the brand, spanking (and really amazing) new release Not A Drop To Drink. Please welcome Mindy McGinnis!

Hanging Out with the Right POV


Ironically, I think I learned the best lesson about writing before I had ever written a word.

At the tiny, rural Ohio school that I graduated from, our annual homecoming was kind of a big deal. And by big deal I mean most of the town went to the football game because there's really nothing else to do on a Friday night. As I get older I've started to realize this might not necessarily be a bad thing, but I digress.

At homecoming, the candidates for King and Queen, along with their younger court members, walk across the football field while the band plays the love song from the newest Disney release (yes, we were that conventional) and the organizer reads the bios that the students wrote themselves.

I don't know who to blame the next bit on - the students for not knowing to always write a bio in third person (and really, what high schooler knows that anyway?) or the announcer, who read their bios straight from their hastily scrawled personal notes. Regardless, every year the announcer would proudly tell the entire town that every candidate and court member really enjoys "hanging out with my friends."

That's right, that 60 year old man had some rockin' friends that all the high schoolers have been hanging out with for decades.

Never a candidate or court member myself, but rather one of the trombonists on the obligatory Disney tune, I always got a charge out of that annual joke. But I took away something from it, too.

So often I'll have a concept in mind that, when it hits the page, finds a better voice in someone who was only supposed to be a supporting character. Likewise, I've had secondary characters flesh out their roles so thoroughly that I want to know more about them. What's their story? What's going on in their world?

It's an interesting lesson, and one I've learned again and again. Stories that I've conceived of in third insist on being in first, and vice versa. I think the most interesting thing I've ever taken away from a high school football game was this insight - don't be afraid to explore the options, it might take you new places that you didn't originally envision.

And sometimes that means you enjoy hanging out with someone else's friends. 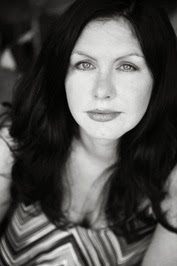 Mindy has a pond in her back yard but has never shot anyone, as her morals tend to cloud her vision. 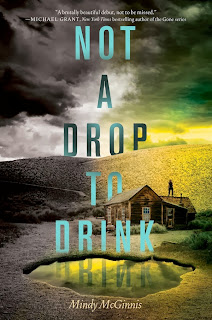 Regret was for people with nothing to defend, people who had no water.

Lynn knows every threat to her pond: drought, a snowless winter, coyotes, and, most importantly, people looking for a drink. She makes sure anyone who comes near the pond leaves thirsty, or doesn't leave at all.

Confident in her own abilities, Lynn has no use for the world beyond the nearby fields and forest. Having a life means dedicating it to survival, and the constant work of gathering wood and water. Having a pond requires the fortitude to protect it, something Mother taught her well during their quiet hours on the rooftop, rifles in hand.

But wisps of smoke on the horizon mean one thing: strangers. The mysterious footprints by the pond, nighttime threats, and gunshots make it all too clear Lynn has exactly what they want, and they won’t stop until they get it….

With evocative, spare language and incredible drama, danger, and romance, debut author Mindy McGinnis depicts one girl’s journey in a barren world not so different than our own.