Making the Switch from Adult to YA by Colleen Gleason

From the Adult to Young Adult Markets
by Colleen Gleason


I’d written more than twenty novels for the adult market when I sold my first YA book on proposal. The proposal consisted of three chapters and a synopsis, so I hadn’t gotten all that far into the book when I got the green light to go ahead and write my first book for teens.

Since then, I’ve had many people ask me about the transition from writing stories for the adult market to crafting a novel for teens—how did I do it, what did I find the most difficult or challenging, how is it different, and, more often than not, why did I do it.

The last question is probably the easiest to answer: that is, why did I switch to a different audience. My response is simple: the book I wanted to write wasn’t suited for an adult market, but fit perfectly for teens.

Part of the reason is because I tend to write genre-bending books anyway (vampire hunting in Regency England, dystopian paranormal adventure, female action adventure….), and most people will agree that the YA market isn’t constricted by genre as much as the adult market is. I can’t tell you how often I had editors (when reading my adult proposals) say that they loved the book/concept/writing/etc., but it didn’t fit in a genre and/or they didn’t know how to market it.

(See my novel Siberian Treasure, which everyone loved but got turned down everywhere because no one knew how to market a female action adventure novel, a la Clive Cussler/Tom Clancy. And this was during the time Alias was popular. Go figure.)

The book that became The Clockwork Scarab is a conglomeration of steampunk, mystery, romance, time-travel, and paranormal, along with a lot of literary nods thrown in. It also has two main leads—both female—which I think is more prevalent in YA literature than adult literature. It’s about two young women in an alternate London who are brought together to solve a mystery. The book is all about Girl Power as much as it is the steampunk world they inhabit, and the mystery they have to solve—and it’s part of a long arc of coming of age, which of course is a mainstay in YA literature.

So, yes, the answer was simple: the idea I had for this book could only be written for a YA audience (which isn’t to say that adults won’t read and, hopefully, enjoy the book)—but the YA publishers seem more agile when it comes to marketing a genre-bending story. And YA readers (again, whether they be teen or adult) are also just as flexible with their expectations: there are much less stringent genre expectations in YA literature than adult literature.

(See also my first novel, The Rest Falls Away: an historical urban fantasy that was marketed as a romance novel even though it didn’t have the Happily Ever After that is part of the expectation of the romance genre.)

Since I could only write these books, the Stoker & Holmes series, for the YA market, I did find my approach different than writing for adults—and contrary to what one might think, it didn’t have to do with vocabulary or language; ie, simplifying or what one might call “talking at their level.”

Not at all. I used the same vocabulary, the same writing style, I would have used had I been writing this book for adults. It was the content that was different from my normal projects.

However, in regards to language and technique, I did find myself needing to be less subtle and more direct with some of the events and dialogue. I wanted to make certain my younger readers could follow the trail of the plot without feeling lost or frustrated.

Even in writing my adult books, when laying the clues for a mystery or suspense plot, I often err in early drafts by being far too subtle: what seems perfectly clear to me, or screamingly obvious, is often lost on the reader (or editor). So I had to be particularly careful to balance the information I wanted to impart without handing it to the YA reader on a silver platter (I’m of the mind the reader should work a little), while keeping it detectable and relatively painless to follow.

But the biggest change was the difference in content and perspective. Although I always write a story about a character who grows and changes in some way, this time I was doing it in the confines of the world of a teenager—and I had to be aware of the restrictions of that environment, and be aware of their adolescent cares, woes and concerns—even in an alternate London. Whereas in my adult novels, my characters have the ability to come and go as they please, they have their own financial resources, they have no one to answer to, and they are adults with adult concerns, in YA stories, all of that is different.

Thus of course I had to approach the story from a completely different perspective, putting myself in the shoes of adolescent characters who are still learning who they are (not that the rest of us ever stop learning) and who make mistakes due to immaturity and inexperience. I also had to address the types of relationships that were appropriate for seventeen-year-old girls. My adult characters usually have careers or places in society, they are older and more likely to have had many relationships with a variety of people—romantic relationships, as well as those with mentors, bosses, and friends. One of the main differences in approaching this YA world was addressing the parental relationships for my characters, and the fact that these young women still have to answer to the adults in their lives. And, simply, that they don’t have the experience to make good decisions all the time.

Another thing that was different for me when writing this YA novel is that I’d never written in first person before (for publication), and definitely not in two very different voices. So not only did I have to create a strong voice for Mina Holmes, but I had to create a second strong voice for Evaline Stoker…while at the same time, keeping their language free of anachronisms and true to the relatively stilted Victorian tone I was attempting to replicate.

That was a great challenge, and I actually ended up making a chart that delineated each girl’s particular voice: structure and vocabulary, as well as any motivations or subtext that would drive from her character. I’ve now finished writing the second book in the series, and while I found it much easier this time around, I still had to go back and clean up some of the chapters to make the voices more distinct. I tend to slip into Mina’s voice more easily than Evaline’s (Mina’s is more stilted and pedantic—very much the flowery yet proper Victorian tone, while Evaline’s is more modern and terse), and when I got into the throes of a scene, I would sometimes “lose” the voice a little.

Now that I’ve finished the second book and am beginning to think about the third book in the series, I feel even more comfortable with the differences in the way I approach the YA writing as opposed to my adult books. I will still continue to write adult stories—and those will be about characters who are further along in their lives, possibly ready to commit to a lifelong relationship, to have a career and families. But for Mina Holmes and Evaline Stoker, for now, they’ll have to settle for solving mysteries, bringing villains to justice…and maybe a stolen kiss in an alley or two.

USA Today bestselling author Colleen Gleason has written more than twenty books for major publishers such as Penguin Group, Harlequin Enterprises, and HarperCollins (as Joss Ware). Her books have been translated into seven different languages.

Colleen lives in the Midwest United States where she is fortunate enough to be working on her next book. 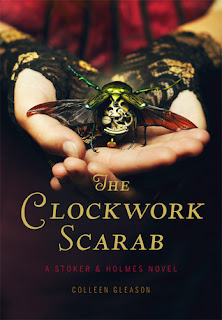 Evaline Stoker and Mina Holmes never meant to get into the family business. But when you’re the sister of Bram and the niece of Sherlock, vampire hunting and mystery solving are in your blood. And when two society girls go missing, there’s no one more qualified to investigate.

Now fierce Evaline and logical Mina must resolve their rivalry, navigate the advances of not just one but three mysterious gentlemen, and solve murder with only one clue: a strange Egyptian scarab. The stakes are high. If Stoker and Holmes don’t unravel why the belles of London society are in such danger, they’ll become the next victims.