Pattyn Von Stratten's father is dead, and Pattyn is on the run. After far too many years of abuse at the hands of her father, and after the tragic loss of her beloved Ethan and their unborn child, Pattyn is desperate for peace. Only her sister Jackie knows what happened that night, but she is stuck at home with their mother, who clings to normalcy by allowing the truth to be covered up by their domineering community leaders. Her father might be finally gone, but without Pattyn, Jackie is desperately isolated. Alone and in disguise, Pattyn starts a new life, but is it even possible to rebuild a life when everything you've known has burned to ash and lies seem far safer than the truth? Destined for greatness... tormented by demons.

VIII is the story of Hal: a young, handsome, gifted warrior, who believes he has been chosen to lead his people. But he is plagued by the ghosts of his family's violent past and once he rises to power, he turns to murder and rapacious cruelty. He is Henry VIII.

H.M. Castor does for Henry what Hilary Mantel did for Thomas Cromwell - VIII is Wolf Hall for the teen and cross-over market. A boy named Seth drowns, desperate and alone in his final moments, losing his life as the pounding sea claims him. But then he wakes. He is naked, thirsty, starving. But alive. How is that possible? He remembers dying, his bones breaking, his skull dashed upon the rocks. So how is he here? And where is this place? It looks like the suburban English town where he lived as a child, before an unthinkable tragedy happened and his family moved to America. But the neighborhood around his old house is overgrown, covered in dust, and completely abandoned. What's going on? And why is it that whenever he closes his eyes, he falls prey to vivid, agonizing memories that seem more real than the world around him? Seth begins a search for answers, hoping that he might not be alone, that this might not be the hell he fears it to be, that there might be more than just this. . . . The unhappy child of two powerful parents who despise each other, young Lilly turns to the ocean to find solace, which she finds in the form of the eloquent and intelligent sea monster Octavius, a kraken. In Octavius's many arms, Lilly learns of friendship, loyalty, and family. When Octavius, forbidden by Lilly to harm humans, is captured by seafaring traders and sold to a circus, Lilly becomes his only hope for salvation. Desperate to find him, she strikes a bargain with a witch that carries a shocking price.

Her journey to win Octavius's freedom is difficult. The circus master wants a Coat of Illusions; the Coat tailor wants her undead husband back from a witch; the witch wants her skin back from two bandits; the bandits just want some company, but they might kill her first. Lilly's quest tests her resolve, tries her patience, and leaves her transformed in every way.

A powerfully written debut from a young fantasy author, Sea Change is an exhilarating tale of adventure, resilience, and selflessness in the name of friendship. When a snowy winter descends upon modern-day San Francisco in June, Mist's quiet existence starts to feel all too familiar. In quick succession, Mist is attacked by a frost giant in a public park and runs into an elf disguised as a homeless person on the streets, and then the man Mist believed was her mortal boyfriend reveals himself to be the trickster god, Loki, alive and well after all these years.

Loki has big plans for the modern world, and he's been hanging around Mist for access to a staff that once belonged to the great god Odin. Mist is certain of one thing: Loki must be stopped if there is to be any hope for Earth. But the fight is even bigger than she knows.

Because Loki wasn't the only god to survive. 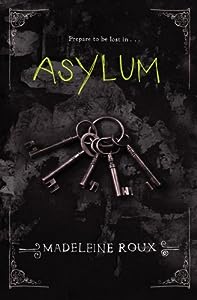 Asylum is a thrilling and creepy photo-novel perfect for fans of the New York Times bestseller Miss Peregrine's Home for Peculiar Children.
For sixteen-year-old Dan Crawford, New Hampshire College Prep is more than a summer program--it's a lifeline. An outcast at his high school, Dan is excited to finally make some friends in his last summer before college. But when he arrives at the program, Dan learns that his dorm for the summer used to be a sanatorium, more commonly known as an asylum. And not just any asylum--a last resort for the criminally insane.
As Dan and his new friends, Abby and Jordan, explore the hidden recesses of their creepy summer home, they soon discover it's no coincidence that the three of them ended up here. Because the asylum holds the key to a terrifying past. And there are some secrets that refuse to stay buried.
Featuring found photos of unsettling history and real abandoned asylums and filled with chilling mystery and page-turning suspense, Madeleine Roux's teen debut, Asylum, is a horror story that treads the line between genius and insanity. Jennifer is an only child, and so were her parents--at least that's what she thinks, until she finds an old photo in the back of one of her mother's books. The woman in the photo looks just like Jennifer, down to the smattering of freckles across her nose. And her mother refuses to talk about it.

Compelled to find answers, Jennifer embarks on a quest that takes her from the wheat fields of Nebraska to the fishing town of Smithport, Maine, home to the one person who can help her solve this family secret--the woman in the photo. But Jennifer learns that it takes the entire village of Smithport to piece together the story of her mother's hidden past. She needs help from Nathan, the genius with the reluctant smile from across the cove; Little, the elderly town matriarch and former movie star; and The Jacks, three weathered fisherman who dabble in pyrotechnics. As Jennifer discovers the lost chapters of her mother's life, she unwittingly begins to write a few chapters of her own.

Elegantly written, On Little Wings is an evocative debut novel about self discovery, first love, and the power of family. Inspired by the gothic classic Wuthering Heights, this stunning new fantasy from the author of the Books of Pellinor is a fiercely romantic tale of betrayal and vengeance.

In a savage land sustained by wizardry and ruled by vendetta, Lina is the enchanting but willful daughter of a village lord. She and her childhood companion, Damek, have grown up privileged and spoiled, and they're devoted to each other to the point of obsession. But Lina's violet eyes betray her for a witch, and witches are not tolerated in a brutally patriarchal society. Her rank protects her from persecution, but it cannot protect her from tragedy and heartbreak. An innocent visitor stands witness to the devastation that ensues as destructive longing unleashes Lina's wrath, and with it her forbidden power. Whether drawn by the romantic, the magical, or the gothic, readers will be irresistibly compelled by the passion of this tragic tale.

Author Question: What is your favorite thing about Black Spring?

That's hard to answer about your own book. It's tempting to say, "my favourite thing is that I have finished it!" But maybe my favourite thing aside from that is that it's really a book about a deep and passionate friendship beween two girls as they grow up to be women in a harsh world. Autumn has come to New England, and with it a new threat to the city of Boston. British naval ships have sailed into Boston Harbor bearing over a thousand of His Majesty King George III's soldiers. After a summer of rioting and political unrest, the city is to be occupied.

Ethan Kaille, thieftaker and conjurer, is awakened early in the morning by a staggeringly powerful spell, a dark conjuring of unknown origin. Before long, he is approached by representatives of the Crown. It seems that every man aboard the HMS Graystone has died, though no one knows how or why. They know only that there is no sign of violence or illness. Ethan soon discovers that one soldier -- a man who is known to have worked with Ethan's beautiful and dangerous rival, Sephira Pryce -- has escaped the fate of his comrades and is not among the Graystone's dead. Is he the killer, or is there another conjurer loose in the city, possessed of power sufficient to kill so many with a single dark casting?

Ethan, the missing soldier, and Sephira Pryce and her henchmen all scour the city in search of a stolen treasure which seems to lie at the root of all that is happening. At the same time, though, Boston's conjurers are under assault from the royal government as well as from the mysterious conjurer. Men are dying. Ethan is beaten, imprisoned, and attacked with dark spells.

And if he fails to unravel the mystery of what befell the Graystone, every conjurer in Boston will be hanged as a witch. Including him. Ken Scholes’s debut novel, Lamentation, was an event in fantasy. Heralded as a “mesmerizing debut novel” by Publishers Weekly, and a “vividly imagined SF-fantasy hybrid set in a distant, postapocalyptic future” by Booklist, the series gained many fans. It was followed by Canticle and Antiphon. Now comes the fourth book in The Psalms of Isaak, Requiem.

Who is the Crimson Empress, and what does her conquest of the Named Lands really mean? Who holds the keys to the Moon Wizard’s Tower?

The plots within plots are expanding as the characters seek their way out of the maze of intrigue. The world is expanding as they discover lands beyond their previous carefully controlled knowledge. Hidden truths reveal even deeper truths, and nothing is as it seemed to be.

In My Totally Awkward Supernatural Crush by Laura Toffler-Corrie, Jenna Bloom is just an average middle school student until her family takes her to her least favorite restaurant for her birthday, where she meets Cowpoke Luke, her waiter and one true love. Oh, and he also happens to be an angel. Jenna can't believe that Luke could actually be interested in her, and yet he is! Unfortunately he's got a demonic foe named Adam who could potentially complicate matters, and when the two boys have a big showdown at the local community theater's performance of Fiddler on the Roof, Jenna is right in the middle of it all. Sara Jane Rispoli is still searching for her missing family, but instead of fighting off a turncoat uncle and crooked cops, this time she finds herself on the run from creepy beings with red, pulsing eyes and pale white skin chasing her through the streets in ice cream trucks; they can only be described as Ice Cream Creatures. They're terrifying and hell bent on killing her, but they're also a link to her family, a clue to where they might be and who has them. While she battles these new pursuers, she's also discovering more about her own cold fury and more about the Chicago Outfit, how the past misdeeds--old murders and vendettas--might just be connected to her present and the disappearance of her family. But connecting the dots is tough and time-consuming and may finally be the undoing of her relationship with the handsome Max--who's now her boyfriend. But for his own safety, Sara Jane may have to end this relationship before it even really starts. Her pursuers who've shown her her mother's amputated finger and the head of the Chicago Outfit who's just whistled her in for a sit-down make a romance unthinkable. The only thing that matters is finding her family and keeping everyone she loves alive.