Character Bucket List: Delaney and Ariella from Who Needs Magic? by Kathy McCullough

We're so pleased to have Kathy McCullough on the blog today. She is the author of Don't Expect Magic and Who Needs Magic? about teenage fairy godmothers. Bucket lists of fairy godmothers? How fun!

Delaney Collins, the protagonist of Don't Expect Magic and Who Needs Magic?, being a boot designer in addition to a (reluctant) fairy godmother, would of course have the following on her bucket list:

2. Visit Paris, another fashion Mecca and also the birthplace of Charles Perrault, the first writer to publish the Cinderella story.

Delaney knows very little about her fairy godmother ancestry, so she would also want to:

4. Do a genealogical study of her father Hank’s side of the family.

Inspired by the scrapbook Hank gave her dedicated to her childhood outings with him, Delaney would also want to:

5. Create a scrapbook of her life in New Jersey with her mom.


Ariella Patterson, Delaney's pink-loving, perky rival in Who Needs Magic?, has embraced her identity as a fairy godmother much more readily than Delaney has. This might explain why Ariella’s bucket list includes:

1. Visiting the Fairy Tale Museums in Moscow, Germany, Latvia and anywhere else she might find one.

2. Visiting Colleen Moore’s Fairy Castle at the Museum of Science and Industry in Chicago.

3. Traveling the Fairy Tale Route in Germany, which includes locations related to fairy tales collected by the Grimm Brothers.

4. Writing a book listing all fairy godmothers and other magical helpers in fairy tales from around the world.

5. Attend the new Broadway musical production of Cinderella and meet the cast backstage. 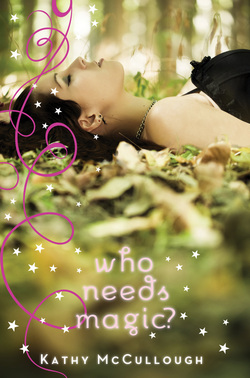 Now that Delaney Collins knows she’s a fairy godmother, she’s ready to make magic happen. But first, she has to find her next client, and it’s not as easy as she thought it would be.

Delaney’s spending the summer working at Treasures, a second-hand store at the mall, surrounded by cool vintage boots—and potential clients. But when she finally feels a connection with Jeni, a girl who needs a life-changing, happily-ever-after wish, Jeni doesn’t want her help. And to make matters worse, Delaney finds herself competing with another f.g., Ariella. Glittery, sparkly Ariella is an uber-f.g., granting wishes with a flick of her lemon candy stick, while Delaney can’t seem to make anything happen—not even a summer romance with her boyfriend, Flynn.

It takes more than waving a chopstick to make big wishes come true, but what good is being an f.g. if you can’t make the boy you like want to be with you as much as you want to be with him?

Kathy McCullough grew up in Michigan, Florida and Pennsylvania, and she now lives in Los Angeles, where she writes novels and screenplays.