WOW Wednesday: Jenna Black on Being Responsible for Your Own Writing Career

We're pleased to have Jenna Black here today for our Writers on Writing WOW Wednesday post. She's the talented YA author of the Faerie Walker series from St. Martin's and a brand new series from Tor Teen. Please give her a warm welcome.


Being Responsible for Your Own Writing Career

In the spring of 2003, I was a textbook example of the frustrated aspiring author. I had been aspiring—by which I mean writing and seriously seeking publication—for 14 years at that time, and had completed eight full novels. I had had many close calls with both publishers and agents, and knew that at least a couple of my novels made it to the “committee” stage before they were ultimately rejected.

I was in a pretty dark place, emotionally, having to work what I called my “soul-sucking day job” while writing in my spare time, and the years and years of rejection had really gotten to me. I had been so close for so long, and I just needed that one lucky break to get my foot in the door. I was obviously a good enough writer to get published, otherwise I wouldn’t have come so close so many times, so all I was lacking was luck. Too bad for me I’m not what you’d call a “lucky” person.

My entire writing career changed that spring, when I attended an intensive writing workshop given by Dean Wesley Smith and Kristine Kathryn Rusch. The class was designed for people just like me, people who were on the cusp of breaking in but just hadn’t managed to take that final step yet. It was by far the most intensive immersion into writing I had ever had. We had class-work all day, as well as a session at night, and we had to do our writing assignments around our already busy schedule. It was just like trying to write around a day job, in fact.

I learned a lot of things during the course of that class, but I think the one that stayed with me the most afterward was something of a class motto: “You are responsible for your own career.”

In my frustration as an aspiring writer, I had fallen into the pernicious trap of thinking I needed a stroke of luck to become a published author. I had effectively abdicated my responsibility for my own career to this illusive idea of “getting lucky,” or “being in the right place at the right time.” If I got yet another lovely personalized rejection letter, it was just more evidence that I didn’t have the luck or the connections I needed to succeed. It couldn’t possibly be because of anything I was doing wrong. Those personalized rejections proved that some editors thought I was ready to be published!

There is no question that for some writers, a stroke of luck, or a moment of being in the right place at the right time, can catapult their careers way ahead of where they would have been otherwise. It can help them get where they’re going faster. But the fact is that if you’re counting on luck, you are not doing everything you can to further your own career—you’re waiting for someone or something else to do it for you.

What I learned in that class was that in all the years I’d been struggling, working hard to achieve my dream, I hadn’t been working nearly hard enough. I wrote when I felt inspired to, and bemoaned the soul-sucking day job that ate up so much of my time and energy. I wrote only science fiction and fantasy, always in third person, never straying outside of my comfort zone or trying anything different. Even though the books were in some ways all very different from one another, I was pretty much doing the same thing over and over again, hoping for a different result.

When I finally came to accept that I could work harder, and that working harder might actually be the key to getting published, everything changed for me. I was determined that I was going to do everything in my power to make my own luck. I decided I needed to up my production and write every day. I gave myself a daily minimum of 1,000 words or one hour, whichever came first, and then strove to exceed that minimum every day. Because I was always mentally exhausted when I returned home from work each evening, I forced myself to get up in the morning while it was still dark out and get my daily writing in before going to work. I am not a morning person. This was a major big deal for me.

I also decided that I was going to try writing other things, broadening my horizons. I began writing romance, and I tried as many subgenres as I could. I wrote contemporary romantic comedy; I wrote romantic suspense; I even wrote a couple of historical romances. And with each book I completed, I learned more about the craft of writing and plotting and constructing a book. I also became considerably less despondent with each rejection, because I always had so many other irons in the fire, so many other hopes still alive.

One year after I rededicated myself to my writing career, I found an agent. About another year after that, I sold my “first” book. It was the 18th book I had completed. (You do the math and figure out how many books I wrote in the years before and after the class!) Two years after that, I was able to quit my soul-sucking day job and become a full-time writer.

I believe I am a far better writer now than I was when I started. It’s amazing how much you can learn just from writing (and completing) a lot of books. And by trying new things. These days, if a potential project scares me or doesn’t feel “safe,” I plunge into it headfirst. If I fail on that project, then so be it. There will be others. But I will have learned something, and through that learning, I will have improved my writing just that much more. That, unlike “luck,” is something I can control. And that is the best way for any aspiring writer to take control of his or her career.

Jenna Black considers herself a typical writer. Which means she's an "experience junkie." She got her BA in physical anthropology and French from Duke University.

Once upon a time, she dreamed she would be the next Jane Goodall, camping in the bush making fabulous discoveries about primate behavior. Then, during her senior year at Duke, she did some actual research in the field and made this shocking discovery: primates spend something like 80% of their time doing such exciting things as sleeping and eating.

Concluding that this discovery was her life's work in the field of primatology, she then moved on to such varied pastimes as grooming dogs and writing technical documentation. Among her other experiences . . .


She's also a proud member of the Heart of Carolina Romance Writers, and would love for her readers to support her fellow authors!

Jenna is represented by Miriam Kriss, of the Irene Goodman Literary Agency. 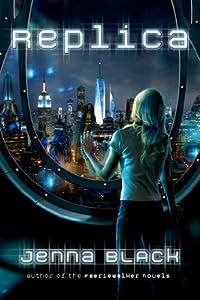 In this breathtaking new SF novel from Tor Teen, sixteen-year-old Nadia Lake’s marriage has been arranged with the most powerful family in the Corporate States. She lives a life of privilege even if she has to put up with paparazzi tracking her every move, every detail of her private life tabloid fodder. But her future is assured, as long as she can maintain her flawless public image—no easy feat when your betrothed is a notorious playboy.

Nathaniel Hayes is the heir to the company that pioneered human replication: a technology that every state and every country in the world would kill to have. Except he’s more interested in sneaking around the seedy underbelly of the state formerly known as New York than he is in learning to run his future company or courting his bride-to-be. She’s not exactly his type…not that he can tell anyone that.

But then Nate turns up dead, and Nadia was the last person to see him alive.

When the new Nate wakes up in the replication tanks, he knows he must have died, but with a memory that only reaches to his last memory back-up, he doesn’t know what—or rather, who—killed him.

Together, Nadia and Nate must discover what really happened without revealing the secrets that those who run their world would kill to protect.

Buy on Amazon | Buy at IndieBound | View on Goodreads