Beginning Your Novel In Media Res by Cori McCarthy

We're so pleased to have Cori McCarthy on the blog today. Her debut, The Color of Rain, came out in May, and she is represented by Sarah Davis of Greenhouse Literary Agency.

In Media Res
by Cori McCarthy

“Of all the directions to be looking, I stare up. So I see her second foot leave the forty-something floor windowsill. Her dark form opens against the gray sky, her arms and legs out like a star falling—a falling star.”

The opening lines of my YA sci-fi thriller The Color of Rain depict a suicide jumper. The girl who is about to die means little to the plot outside of the fact that it kick-starts the main character, Rain’s, resolve to do something. To escape a dark and dreary life on Earth City. To save her brother. No matter what.

I hoped that this beginning would grip the reader and prove in the shortest amount of words that Rain is the kind of girl who will act. Make the hardest decisions. The darkest ones. A character who would charge forward and never, ever look back.

In graduate school, I was introduced to the phrase in medias res, a Latin term for in the middle of things. This is something that I take very seriously when writing and particularly when revising. In the first draft, I started the book earlier. Prior to Rain witnessing the suicide, she is walking down the street and arguing with her brother, but when revising, I chose to leave all that out. To begin in the middle of the scene. While this technique can cause momentary confusion, it can also sweep the reader into the momentum of a story about to takeoff. At least, that’s the hope!

After I learned about in medias res, I started to see it everywhere, and what I’ve had to pay close attention to is where the story begins. Should the writer start off right in the heart of bombs exploding? Or should she start after the mushroom cloud has gone up, and those in its wake stand staring, blackened with ash and blinded by fire? The answer to that is in what the writer is trying to signify to the reader. I.e. a story that begins with bombs detonating might be about retribution, whereas the story beginning with the immediate ashen aftermath might be about survival.

Let’s look at the opening lines from Melina Marchetta’s masterful book, Jellicoe Road:
“My father took one hundred and thirty-two minutes to die. I counted. It happened on the Jellicoe Road.”

Got your attention, didn’t it?

The reader learns in the following lines that the narrator’s father died in a car crash, but instead of beginning with the crash or the preceding car ride, Marchetta launches the story in the middle of the accident—setting the stage for the enormous grief that touches every character in the novel.

Less dramatically, here’s an example from my favorite book, Jane Eyre:
“There was no possibility of taking a walk that day. We had been wandering, indeed […]”

What do you think Charlotte Bronte was trying to imply with this opening? I feel immediate change. A suggestion that there will be an end to Jane’s wandering—not to mention dark foreshadowing of a life which will be full of walking through rain.

I could be accused of reading into things here, but I like to think that Bronte wrote these lines on purpose. That she began in the middle of a day wherein one small act would irrevocably change her main character’s life.

When it came to The Color of Rain, I wanted the opening to show Rain’s determination, but I also wanted to set an immediate tone. Writing sci-fi brings with it the blessing (and burden) of world building, and while I wanted to create a post-apocalyptic setting, I didn’t want to spend fifty pages outlining a downtrodden stage and its sad people. Instead, I adapted a memory that a middle school teacher once told me about his experiences as a young boy during the Great Depression.

One day, he was walking through the streets of downtown Cleveland with his father, only to witness a suicide jumper fall from one of the skyscrapers. No statistic or picture ever made me understand what the Great Depression might have been like that story. I held onto it, and when it came time to succinctly show Rain’s depressed world, I re-imagined my teacher’s experience in the hopes that that one moment would grip the reader and sweep them into Rain’s story.

Cori McCarthy studied poetry and screenwriting before earning an MFA in Writing for Children & Young Adults from Vermont College of Fine Arts. The Color of Rain is her first novel, and she lives in Michigan. 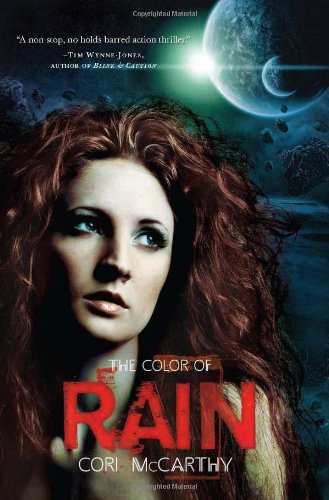 If there is one thing that seventeen-year-old Rain knows and knows well, it is survival. Caring for her little brother, Walker, who is "Touched," and losing the rest of her family to the same disease, Rain has long had to fend for herself on the bleak, dangerous streets of Earth City. When she looks to the stars, Rain sees escape and the only possible cure for Walker. And when a darkly handsome and mysterious captain named Johnny offers her passage to the Edge, Rain immediately boards his spaceship. Her only price: her "willingness."

The Void cloaks many secrets, and Rain quickly discovers that Johnny's ship serves as host for an underground slave trade for the Touched . . . and a prostitution ring for Johnny's girls. With hair as red as the bracelet that indicates her status on the ship, the feeling of being a marked target is not helpful in Rain's quest to escape. Even worse, Rain is unsure if she will be able to pay the costs of love, family, hope, and self-preservation.

With intergalactic twists and turns, Cori McCarthy's debut space thriller exists in an orbit of its own.