We're excited to have Elizabeth Lenhard with us today. She's worked as a journalist and a critic, in addition to writing numerous novels under her own, name, a pseudonym, and as a ghost writer. Thanks for sharing your insight with us, Elizabeth!

Writing To Your First Line
by Elizabeth Lenhard


As it turns out, I’m not very introspective about how I begin a book.

If I have rules, rituals, or a process for launching a novel, I haven’t pondered them long enough to identify them. This is probably a consequence of the way I’ve made my living since the age of 21. First I wrote one article every day (at least) as a features reporter for the Atlanta Journal-Constitution. After a few years of that, I became a children’s novelist for hire. I wrote media tie-ins, movie novelizations, choose-your-own-adventure books, you name it.

Even though I’ve written a few books with hard covers, blurbs, ARCs, and all that, I still write work-for-hire books. I love them and not just because I get a contract and a check at the beginning of the process. I find that writing inside a box—and with a tight deadline—can be a surprisingly rich creative experience. It’s all the more pleasant when I don’t have time to agonize over my opening line. Overworking your opening is like overworking your dough when baking. The result is gummy and heavy. So I try not to think too hard about it.

That said, I do rewrite that first line, paragraph, or passage dozens of times. I just do it fast. If I could, I’d skip it altogether and come back later, but I’m not one of those writers who can skip ahead. If the beginning isn’t right, I have no launchpad; nowhere to go.

Here’s the maddening thing about that: I don’t discover the stuff I need to write a great beginning until I’m deeper into the book. I outline my plots, but the voice and tone and emotions and essence of a book? I discover those as I write.

Yet all those things really need to be there from word one.

So by the time I’ve gotten that beginning down, I know—in my bones—what I’m doing. I know where the story is going and I know (well, for the most part) how it’s going to get there.

Some of my favorite first lines are simple, almost to the point of being blunt. But they are loaded. Like, “When I was little I would think of ways to kill my daddy.” (Ellen Foster by Kaye Gibbons) Or, “There is no lake at Camp Green Lake.” (Holes by Louis Sachar) These are pure hook. The first line of the first Betsy-Tacy book by Maud Hart Lovelace is like this as well, but in an incredibly sweet way: “It was difficult, later, to think of a time when Betsy and Tacy had not been friends.”

But then sometimes, a first line that’s full of exposition will come along and surprise me. I love this one from the short story “Sentimental Memory” by Laurie Colwin: “When I arrived in Inverness, Scotland, one freezing March, I had it in mind to tell anyone who asked that I was on a photographic assignment. I had the cameras to prove it.” Irresistible.

I couldn’t choose which approach I like best. That’s why I’ve written both kinds of first lines myself—the simple and the saturated. All were, I hope, fully loaded. Elizabeth Lenhard is the author of more than fifty books for teens and children. Her most recent releases are Sixteenth Summer and Fifteenth Summer, which were written under the pseudonym Michelle Dalton. She's also the author of the Chicks With Sticks trilogy. Elizabeth lives in Decatur, Georgia with her husband and two daughters. 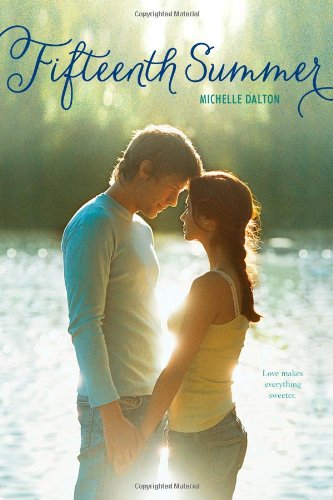 Love blossoms by the lake in this sweet summer romance, in the tradition of Seventeeth Summer and Sixteenth Summer.

Chelsea isn’t looking forward to her summer at the lake. It’s the first time her family has been there since her grandmother died, and she can’t break out of her funk. But her summer takes a turn for the better when she meets a boy who works in the bookstore. Josh is cute, sweet, funny…and best of all, seems to like her as much as she likes him. As the days pass by in a blur of boat rides, picnics, and stolen kisses, she can’t believe how lucky she is. No one has ever made her feel so special, or so beautiful.

But Chelsea knows her days with Josh are numbered. She’ll be heading home at the end of the summer—and he’ll be staying behind. Will this be Chelsea’s summer of love? Or will it be the summer of her broken heart?