Where's the Magic? (There is No Magic.) by Amy McNamara

This weekend my honey and I saw writer/filmmaker Sarah Polley’s STORIES WE TELL a documentary she made to address a piece of her family’s mythology and its effects on all involved. She opens the film with a quote by Margaret Atwood from her novel Alias Grace.

“When you are in the middle of a story it isn’t a story at all, but only a confusion… It’s only afterwards it becomes anything like a story...”

I love that quote. Story is something we pull together, afterward. Things happen, then we shape them into something with more structure.

I have a weakness for magical thinking. Some might think this is a good, even necessary quality in a person who spends much of her time imagining other worlds, but one lesson I learn over and over again is that where the storytelling impulse is great, you must choose the story you tell yourself about your life and your work very carefully.

Stories are incantatory, of course. Any reader can tell you that. Words wend us river-like along plot’s current. They mean something. And meaning makes us. If I had a dollar for every time someone told me they were going to write as soon as they could find the time, I wouldn’t need to work for a living. In those instances, I usually nod and smile, because I believe we all have the right to tell ourselves into being, to say the truth of our own lives without uninvited editorial input, but if I were invited to comment in those circumstances, what I might say is, ahh, I know the ending of that particular story and it doesn’t result in a novel.

The stories we tell become the truth of our lives. And so with our work.

After lofty thoughts such as these, you might think I’ve got it figured out, I’ve swept away the vestiges of magic and superstition with a stiff-bristled broom and set out to work clear-headed on a daily basis.

A few months ago I was fretting to a fellow writer about writing. The fear went something like this: Lovely, Dark and Deep wrote itself. It came from an unfathomable well of personal grief. I was torn open by feeling, unnamable magic took over, and three months later, there on my desk was a new beast, a stack of pages with a pulse and the promise to begin breathing on its own.

That’s a nice little story. And while it’s fact that I was in a blurry fog of grief over the loss of a friend when I set out to write that book, the truth that particular origin story elides - the one my wise friend pointed out when she told me it was time to stop mythologizing the writing of that book - that truth is that I worked on it. I may print that out and hang it on the wall above my desk.

I worked on it.

I wrote and rewrote that story. I carried it with me both literally and figuratively every day, every minute I could, even when the minutes didn’t have the luxury of joining themselves together into hours. I read my previous day’s work on the tiny screen of my phone while taking my children to school. I wrote it in my head as I was falling asleep and then again when I woke up. I wrote notes and scenes in text messages to myself on the subway and on my morning jog. I made notes on it when I was preparing dinner. I read huge passages of it out loud every day, often before sleep, so I had, despite a herky-jerky working schedule, a continuous flow of it running through me, because for me, that helps it carve its own banks, rush along, and begin to take shape. I wrote scenes, chapters, and characters that all ended up in the recycle bin. I felt discouraged, but I carried on anyway.

Why would I forget that part of the story? Why did I let go of the fact that words were not set down in their final form at each sitting? And why would I hold myself to that impossible standard now? I made lists; I had whole days devoted only to the items on that list – an example – go through entire manuscript and look at all references to Character X. Make sure even though she’s a minor character she’s got integrity; she holds together in a believable, whole-person kind of way.

I don’t know why I’ve had to learn this more than once and will likely have to again. I’ve been writing all my life. I have experienced ecstatic moments of “flow,” times when the work grew so large I had the bliss of forgetting myself, of being lost in it. But those experiences are miniscule and rare in comparison to all the hours I’ve spent wrangling language and letting language wrangle me - all those agonies pooling themselves into poems, stories, and letters, bits of language that have reached out beyond me and done something in the world.

So why would I edit them out of my personal narrative? Why latch onto the simpler story, the one with magic in it? Maybe there is something important about learning and relearning to stay with the work, the sloppy, lurching, contradiction-filled movement through time that makes up life’s messy tangle.

For me, it comes down to this: the difference between being someone who wants to write and an author is that the author understands the magic comes from doing the work and not the other way around. Amy McNamara is the author of LOVELY, DARK AND DEEP and a manuscript of poems, the new head chronometrist. LOVELY, DARK AND DEEP was an ABA/ABC New Voices Pick, Fall 2012 and won a 2013 International Reading Association Children’s and Young Adult’s Fiction Award. Her poems appear in a wide variety of literary journals and have been nominated for a Pushcart Prize. She has a BA in French Literature and an MFA in Poetry from the Warren Wilson MFA Program for Writers. She lives with her family in NYC. 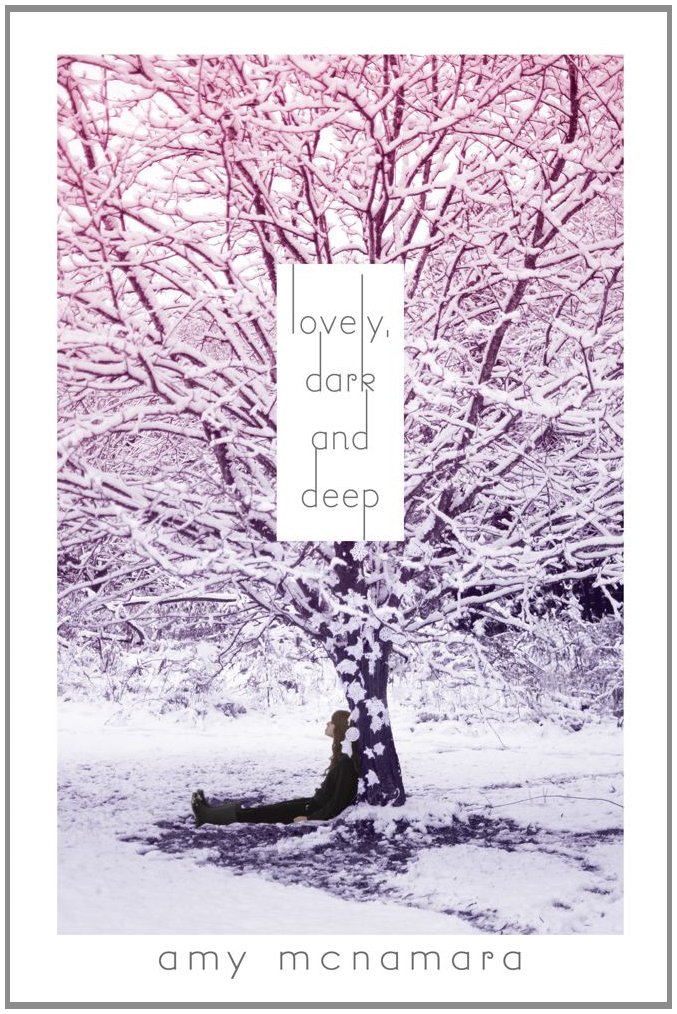 Since the night of the crash, Wren Wells has been running away. Though she lived through the accident that killed her boyfriend Patrick, the girl she used to be didn’t survive. Instead of heading off to college as planned, Wren retreats to her father’s studio in the far-north woods of Maine. Somewhere she can be alone.

Then she meets Cal Owen. Dealing with his own troubles, Cal’s hiding out too. When the chemistry between them threatens to pull Wren from her hard-won isolation, Wren has to choose: risk opening her broken heart to the world again, or join the ghosts who haunt her.