The All Mighty Opening by Christian Schoon

A quick-and-dirty sampling of advice about openings, from inspiring to simply effective, seems to boil the issue down to a few pivotal elements: give us a unique voice, surprise us, juxtapose conflicting character traits, oh and be sure to foreshadow your theme, etc. etc. We’ve heard all of this before. And, of course, the opening scene of any book is important, for all the obvious reasons. But my own experience has led me to believe this: openings have been getting way too much press lately - and it’s gone to their lettery heads. It’s shoveling more stress onto pre-stressed writers than is necessary. There’s so much weight being dumped onto the first ten words-to-three-paragraphs of our stories that it’s making us writers freak out a little. And as a result, some of us end up putting the word-horse before the narrative-cart; i.e., we dangle more tempting bits in the open than can be delivered in the remainder of the book.

So, I’m saying that when it comes to starting a book, we writers might benefit from taking a nice, deep breath, un-tensing our jaw muscles a little and just Starting the Book. Sure, you want an opening that has some… suchness… to it. But don’t let that little sucker handcuff ya. You can, and almost certainly will, go back during the writing journey and revise your open. Just don’t give these initial sentences so much power over you and the process that it voodoos your author-brain into believing the All Mighty Opening is mighty to exclusion of all else. Ease up on yourself. It’ll come when it comes and ye shall know it when it cometh….

So, how’d I start my young adult science fiction novel in a way that I felt set up the story to come? Here’s my first attempt, early in the process:

“Zenn could see herself reflected in the gigantic eyeball, as if she stood before a gently curved, full-length mirror. She didn’t like what she saw. It had nothing to do with being inches away from a two-foot-wide eye; she’d seen bigger eyes. It was the odd angle of the tank-pack strapped to her back. She hadn’t noticed before – she was too preoccupied with getting into position on the bridge of the whalehound’s nose.”

I really liked this opening (and, no, it didn’t then go into a description of Zenn’s physical appearance. That’s one variety of opening you’ll want to avoid). But then I split my one long book into two, and after more rewrites, decided a prologue (yes, the dreaded P-word) was needed to intro the series. I also decided I wanted to lower my readers a little more gently into Zenn’s world, at a time when she was younger, and had yet to start climbing up on whalehounds. And, I wanted readers to enter my off-world world with something familiar to anchor the scene. How about an old pick up truck? Homey. Common-place. And yes, they use refurbished trucks on my dystopian Mars…

“Wind clawed at the canvas tarp covering Zenn in the cargo bed of the ancient pickup truck. The truck picked up speed, rattling and bucking down the rutted dirt road, and it took all her strength to keep the coarse cloth from being ripped out of her hands. But more speed was good. It meant her father and Otha hadn’t noticed her hiding beneath the tarp… yet. The truck hit a bump; she lifted several inches into the air, then came down painfully against the rusty surface.

Was the earlier opening more memorable and thrilling? Sorta. But it wasn’t what was needed under the changed circumstances of the two-book story. So, I didn’t anguish. And, importantly, I didn’t discard it, either. The first opening I wrote now starts Chapter One after the Prologue. Win-win.

OK. Enough of all that. Here are a few openings I like, and that really work for me without being over-wrought or self-consciously open-y:


“Far out in the uncharted backwaters of the unfashionable end of the Western Spiral arm of the galaxy lies a small unregarded yellow sun.” Douglas Adams, The Hitchhiker’s Guide to the Galaxy
Low-key and mildly humorous, not reaching out to grab you by the nose-hairs, but a great set up for what follows. Adams effortlessly establishes his comic premise that as far as the rest of the universe is concerned, our sun and the humans circling it are not only less than special, but actually rather dowdy and déclassé.

“In a hole in the ground there lived a hobbit.” J.R.R. Tolkien, The Hobbit
A brave but ever-so-perfect, here’s-a-fact-for-ya start (recall that in ’37 no one knew what a hobbit was). Seriously economical! A simple, not pushy-smart or startling open, but easy-going and predictive of the upcoming reluctantly ventured-upon adventure.

“On Mondays, Wednesdays and Fridays it was Court Hand and Summulae Logicales, while the rest of the week it was the Organon, Repetition and Astrology. The governess was always getting muddled with her astrolabe, and when she got especially muddled she would take it out on the Wart by rapping his knuckles.” T.H. White, The Once and Future King
Um… remind you of some other academic setting? Not surprising. Wart, who will grow up to become King Arthur, will undergo what may be one of the earliest literary examples of a wizarding education. This opening establishes his world with minimal fuss and admirable specificity.

So, that’s my take. Your mileage, and inspiration, could vary. Wildly, even. But thanks for letting me hang out here for a bit. No, go forth and show those pesky words who’s boss! Born in the American Midwest, Christian started his writing career in earnest as an in-house writer at the Walt Disney Company in Burbank, California. He then became a freelance writer working for various film, home video and animation studios in Los Angeles. After moving from LA to a farmstead near Iowa City several years ago, he continues to freelance and also now helps re-hab wildlife and foster abused/neglected horses. He acquired his amateur-vet knowledge, and much of his inspiration for the Zenn Scarlett series of novels, as he learned about - and received an education from - these remarkable animals. 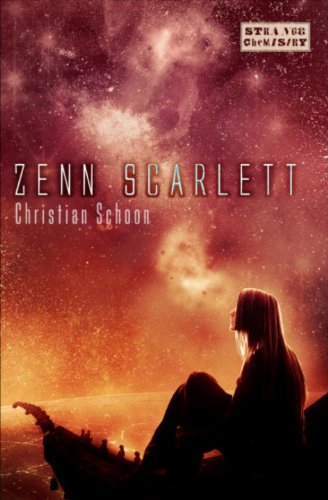 Zenn Scarlett is a bright, determined, occasionally a-little-too-smart-for-her-own-good 17-year-old girl training hard to become an exoveterinarian. That means she’s specializing in the treatment of exotic alien life forms, mostly large and generally dangerous. Her novice year of training at the Ciscan Cloister Exovet Clinic on Mars will find her working with alien patients from whalehounds the size of a hay barn to a baby Kiran Sunkiller, a colossal floating creature that will grow up to carry a whole sky-city on its back.

But after a series of inexplicable animal escapes from the school and other near-disasters, the Cloister is in real danger of being shut down by a group of alien-hating officials. If that happens, Zenn knows only too well the grim fate awaiting the creatures she loves.

Now, she must unravel the baffling events plaguing her school, before someone is hurt or killed, before everything she cares about is ripped away from her and her family forever. To solve this mystery – and live to tell about it – Zenn will have to put her new exovet skills to work in ways she never imagined, and in the process learn just how powerful compassion and empathy can be.