Hi Everyone, I am over at the Enchanted Inkpot today with a post about free online tools and tips for plot development and getting over writer's block. Please stop by and say hello once you've finished the guest post below from Celia Robert.


In most cases, our senses lead the way for us, letting us know if something is worth our attention or not. This goes for the first lines of stories as well. The key to having a great first line is to hook the reader and have him/her turn page after page. It acts as an appetizer. It can help set up the tone of the book and describe where the story is taking place. It is always a good idea to open that first line with the main character in order to familiarize the reader. The best advice I can give anyone is write a line that instantly grabs the reader, makes him/her curious, and leaves an impression. Something memorable. This doesn’t mean hitting the reader with an action scene at the beginning, and then two paragraphs later make them wonder what happened all of a sudden.

Some of my favourite first lines:

I greeted his tombstone the way I always did—with a swift kick. ~COLORS LIKE MEMORIES by Meradeth Houston

This line drew me in. I was curious to know why she kicked someone’s tombstone. The mood I found on this one was maybe the character was frustrated, but I wanted to know why.

It was the biggest night of my life, but all I could think about was my cheetah bra. ~BITTERSWEET by Sarah Ockler

I loved this one because of the contrast between it being the biggest night of the character’s life and her cheetah bra. I really wanted to know why she was looking for it. And besides, the comparison between life and bra made me smile.

It has been sixty-four years since the president and the Consortium identified love as a disease, and forty-three since the scientists perfected a cure. ~DELIRIUM by Lauren Oliver

This opening had me curious. I knew that this book was about love, but that it is declared a disease had my curiosity meter rolling. Why would love, one of the strongest emotions of all, be declared a disease?

What do you think about first lines of the novel? Do you have any memorable ones?

Cecilia Robert lives in Vienna with her two children, has an incurable obsession with books, anything romantic, TV and medieval architecture. When not working in her full time job, catching up with her two children, writing or reading, she can be found, knitting or crocheting, taking photos of old buildings. 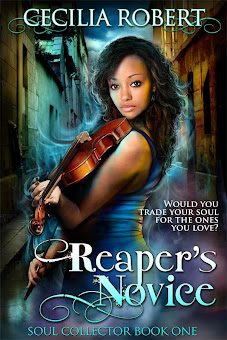 17- year- old Ana Maria Tei’s life has always been perfect: loving parents, good grades, and a future so bright it outshone the sun. But now words like “separation” and “divorce” are sending her world plummeting to hell. Determined to keep her family intact, Ana plans a family-bonding trip from Vienna to Tuscany. Except fate has other plans. Ana’s parents and siblings are killed in a car accident on their way to pick Ana up from school.

Enter Grim, aka Ernest. He promises to relinquish the four souls if Ana agrees to trade her soul for theirs and serve a lifetime as his novice. In order for Ana to graduate from her Reaper’s Novice station to a Soul Collector graduate, Grim puts her to test. To her horror, she finds out becoming a Reaper’s Novice didn’t happen by chance. It was preordained, and she is forced to make a choice: save her family’s souls or come to terms with who she really is and complete the task set for her.