Inspired Openings: Paula Morris on Cutting Off the Onramp and Getting into Story

Where to begin? Well … I’m someone who thinks about the beginning of a story all the time. Every day, in fact. One of my New Year’s Resolutions – the only one I can remember, actually – was to read a short story every day this year. A new story and a new writer, to keep widening the circle.

A lot of these stories I’m finding in books like Best European Fiction 2013, or Everyman’s Bedtime Stories. When I flick through the pages of a collection or anthology, looking for that day’s story, what I’m really doing is reading beginnings. Here’s a great example: “My father lost me to The Beast at cards.” (Angela Carter, The Tiger’s Bride). That’s the kind of first line that makes me want to keep reading.

But another lesson from all these stories – seventy-six and counting – is that there are principles of good writing, but not really any rules. One of the most gripping, brilliant stories I’ve read so far this year is The Night Face Up by the late Argentinian writer Julio Cortazar. The story begins in a deceptively ordinary way:

“Halfway down the long hotel vestibule, he thought that probably he was going to be late, and hurried on into the street to get out his motorcycle from the corner where the next-door superintendent let him keep it. On the jewelry store at the corner he read that it was ten to nine; he had time to spare. The sun filtered through the tall downtown buildings, and he – because for himself, for just going along thinking, he did not have a name – he swung onto the machine, savoring the idea of a ride. The motor whirred between his legs, and a cool wind whipped his pantslegs.”

Now, as anyone reading this story will discover, that little throw-away detail of not having a name will be crucial. And the modern-life ordinariness of this episode will also be relevant in ways only the worst possible spoiler could reveal. Beginnings may not grab you by the throat, like the first line of the Angela Carter story, but they have to be there for a reason – for both the art and craft of the story.

The thing is with writing fiction: you can get away with anything, as long as you can get away with it. The problem for lots of writers starting out is that they read a published novel or a short story and try the same thing, to much lesser effect. When they’re told something isn’t working in their draft manuscripts, they grow instantly indignant. “But Tolstoy did it! But J.K. Rowling did it! But Neil Gaiman did it!”

Of course they did. But writing good fiction is hard, and not everyone can pull the same things off. That’s why so many people who teach writing, or edit books, or sell books for a living, try to give apprentice writers useful advice. We urge you not to begin with a dream, even though we know that Haruki Murakami did it in The Dancing Dwarf: “A dwarf came into my dream and asked me to dance.” We urge you not to begin in dialogue, even though we know that Louisa May Alcott did it in Little Women: “ ‘Christmas won’t be Christmas without any presents,’ grumbled Jo, lying on the rug.”

Chekhov contended that when you write a story, you have to get rid of both the beginning AND the ending. He thought writers “do most of our lying” in these sections. Certainly, I often try to persuade my own students to cut their beginnings, which read like dull on-ramps to the exciting highways of the real stories.

On my editor’s advice, I lopped off the first chapter of my first YA novel, Ruined. I did exactly the same thing with my second YA novel, Dark Souls. They were on-ramps. They weren’t necessary to the story. The prologue of Dark Souls, however, was barely changed at all. I wrote it quickly, and I like it more than almost anything I’ve written. The first line – “At night, cornfields looked like the ocean” – had been simmering in my head for years, waiting for the right story.

My favorite first line from a novel, by the way, is from The Trial by Kafka: “Someone must have been telling lies about Josef K, for one morning, without having done anything wrong, he was arrested.” This is the kind of line that could begin a comedy or a tragedy, or something that’s a mixture of both. Now that’s a beginning. 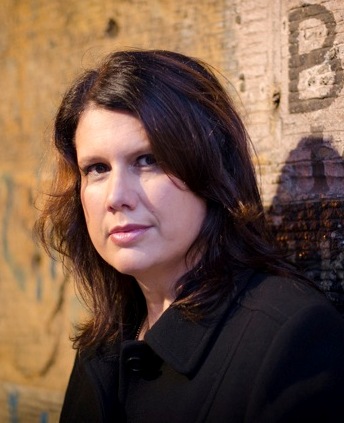 Paula Morris is a fiction writer from Auckland, New Zealand. She's studied and worked in a number of places – London, New York, Iowa City, New Orleans – and is currently Fiction Writer-in-Residence at the University of Sheffield in the UK.

She has published a number of novels and stories for adults, and in 2012 her most recent adult novel, RANGATIRA, won the fiction categories of the New Zealand Post Book Awards and the Nga Kupu Ora Maori Book Awards. It was published in German by Walde+Graf.

She is the author of three YA novels, all ‘haunted city’ mysteries published by Scholastic: Ruined (2009) and its sequel Unbroken (2013); and Dark Souls (2011). She’s working on another YA mystery, set in Rome.

Find Paula on her website
Check out Paula’s blog Welcome back to New Orleans.
Where the streets swirl with jazz and beauty.
Where the houses breathe with ghosts.

A year ago, Rebecca Brown escaped death in a New Orleans cemetery. Now she has returned to this haunting city. She is looking forward to seeing Anton Grey, the boy who may or may not have her heart.

But she also meets a ghost: a troubled boy who insists only she can help him. Soon Rebecca finds herself embroiled in another murder mystery from more than a century ago. But as she tries to right wrongs, she finds more questions than answers: Is she putting her friends, and herself, in danger? Can she trust this new ghost? And has she stumbled into something much bigger and more serious than she understands?