I am so happy to be able to share this post with you all. The story it tells blew my mind when I first heard it, and I know so many people who believe that any project is "fixable" if we just make the writing better, if we just find a new angle, if we just work harder. It's devastating when a project doesn't sell, but read Veronica's story. Every bit of the work you have done is still there with you for the next book. For the right book.

Happy Reading and Writing, Everyone. Have a great week!


WALKING AWAY FROM A PROJECT AND OPENING NEW DOORS

Today is the publication date for THROUGH THE EVER NIGHT, the second book in the UNDER THE NEVER SKY Trilogy. In many ways, the launch of this book feels like the official beginning of my writing career, even more than the publication of my debut novel. I can say that I write books now, and I'd be lying if I didn't admit that I've gained a newfound confidence as an author. The learning curve over the past year has been incredibly steep and I finally feel comfortable juggling all that it takes to be a published author--from the writing, to working with a publisher, to marketing, and on.


It reminds me of another point in my writing career that was equally challenging. Before I wrote UNDER THE NEVER SKY, I spent many years (eight) working on a fantasy series. I wrote two manuscripts. I perfected two manuscripts. At the time, those stories had the best of my writing and ideas, and I was rewarded with some successes, like great critiques by agents at conferences, and awards in writing contests. But the weird thing? I didn't want to query them. I didn't want to put them out in the world. Why? Well, I think deep down, I knew they weren't good enough. Or, at least, that I could do better.


It took a critique by a prominent - and infamously blunt - agent to get me to walk away from those manuscripts. This agent told me point-blank that I wasn't pushing myself hard enough. That I could write bigger, more daring, bolder. His exact words, which are seared into my brain for eternity: "I think you're going to be disappointed if you try to take this out to market."


I believed him. I believed him because I was already feeling the same things, but he put it out there. After that critique, I couldn't deny it anymore. I abandoned eight years of work (talk about painful) and started UNDER THE NEVER SKY.


It was the best decision I ever made (aside from marrying my husband and having my kids.) Honestly. By letting go of years of work, I was suddenly free. I tried bigger, bolder, more daring.... and the result was a book I loved far more than those two first manuscripts. It was a book that I was proud to put out in the world. And it was a book that did not disappoint me when I took it out to market.


If you are a writer, I hope that if you need to walk away from a project, you'll see it as an opportunity. I know how hard it is to do, but I firmly believe that you will bring the best of yourself to your new project. You won't regret it.


Thanks so much for having me today! Wishing you all a wonderful 2013!


Through the Ever Night
by Veronica Rossi 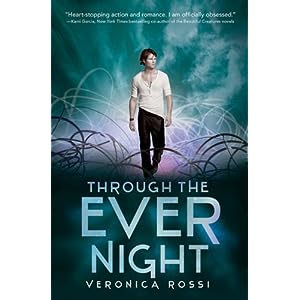 It's been months since Aria learned of her mother's death.

Months since Perry became Blood Lord of the Tides, and months since Aria last saw him.

Now Aria and Perry are about to be reunited. It's a moment they've been longing for with countless expectations. And it's a moment that lives up to all of them. At least, at fi rst. Then it slips away. The Tides don't take kindly to former Dwellers like Aria. And the tribe is swirling out of Perry's control. With the Aether storms worsening every day, the only remaining hope for peace and safety is the Still Blue. But does this haven truly exist?

Threatened by false friends and powerful temptations, Aria and Perry wonder, Can their love survive through the ever night? In this second book in her spellbinding Under the Never Sky trilogy, Veronica Rossi combines fantasy and sci-fi elements to create a captivating adventure—and a love story as perilous as it is unforgettable.

Order Through the Ever Night on Amazon

View Through the Ever Night on Goodreads


Under the Never Sky Since she'd been on the outside, she'd survived an Aether storm, she'd had a knife held to her throat, and she'd seen men murdered. This was worse.
Exiled from her home, the enclosed city of Reverie, Aria knows her chances of surviving in the outer wasteland - known as The Death Shop - are slim. If the cannibals don't get her, the violent, electrified energy storms will. She's been taught that the very air she breathes can kill her. Then Aria meets an Outsider named Perry. He's wild - a savage - and her only hope of staying alive.
A hunter for his tribe in a merciless landscape, Perry views Aria as sheltered and fragile - everything he would expect from a Dweller. But he needs Aria's help too; she alone holds the key to his redemption. Opposites in nearly every way, Aria and Perry must accept each other to survive. Their unlikely alliance forges a bond that will determine the fate of all who live under the never sky.(less)

Order Under the Never Sky on Amazon

View Under the Never Sky on Goodreads


Veronica is the author of Under the Never Sky, the first book in a post-apocalyptic trilogy for young adults. She completed undergraduate studies at UCLA and then went on to study fine art at the California College of the Arts in San Francisco. She lives in Northern California with her husband and two sons. When not writing, she enjoys reading, painting, and counting down the minutes until she can get back to making up stories about imaginary people.

Foreign rights to the UNDER THE NEVER SKY trilogy have sold in over twenty-five territories to date and film rights have been optioned by Warner Bros.

Her work is represented by Josh Adams of Adams Literary.