Introducing Banyan, the main character of ROOTLESS by Chris Howard


This was the original "character sketch" I made for the protagonist of what was then called THE TREE CATCHER… the first draft of my debut novel ROOTLESS. I originally was going to call my main character Jawbone, but I ended up giving that name to a different character, after I decided all the tree builders would be named after different types of trees. I actually don't always do these sort of character sketches… but they can be super useful! And this was really interesting for me to revisit!

Age: Late teens
Occupation: Tree Builder - creates scrap-metal forests for rich clients who still crave nature in a world where there is none. His trees are beautiful - incredible works of art - wind-chime branches, velvet leaves and flickering LED lights…

What does he want at the beginning of story: To find his missing father (who was also a tree builder)

What does he want at THE TURN: To find the REAL TREES (promised land)… and find father. Can he find both? Does finding one mean losing the other??

What would he never do: Destroy a living tree. Hurt an innocent person.

And there you have it! So much of my original notes made it into the book… in fact, the very first thing (his name) was the only thing that really changed. My wife suggested Banyan, and it stuck right away :) 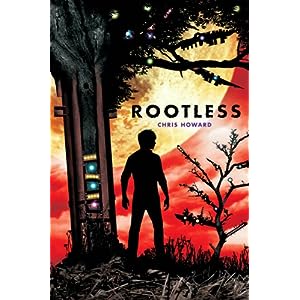 17-year-old Banyan is a tree builder. Using salvaged scrap metal, he creates forests for rich patrons who seek a reprieve from the desolate landscape. Although Banyan's never seen a real tree--they were destroyed more than a century ago--his missing father used to tell him stories about the Old World.

Everything changes when Banyan meets a mysterious woman with a strange tattoo, a map to the last living trees on earth, and he sets off across a wasteland from which few return. Those who make it past the pirates and poachers can't escape the locusts . . . the locusts that now feed on human flesh.

But Banyan isn't the only one looking for the trees, and he's running out of time. Unsure of whom to trust, he's forced to make an alliance with Alpha, an alluring, dangerous pirate with an agenda of her own. As they race towards a promised land that might only be a myth, Banyan makes shocking discoveries about his family, his past, and how far people will go to bring back the trees.

Before he wrote stories, Chris Howard wrote songs, studied natural resources management, and led wilderness adventure trips for teenagers. He currently lives in Denver, CO, and ROOTLESS is his first novel. Join him at http://www.chrishowardbooks.com/