REVENGE: A Case Study in Concept and Character Likeability

It's no secret that this season's hot new TV series, REVENGE, is a modern twist on THE COUNT OF MONTE CRISTO with a female lead. Genius idea, right? Dumas' classic was originally serialized, presented, one segment at a time, for maximum impact. A high-adventure soap crafted to get people talking about vengeance and mercy, hope and hopelessness, justice and injustice. And REVENGE, too, offers all of that.

But talk about likability issues. The show's writers have a challenge before them. Emily Thorne aka Amanda Clarke shows up in the Hamptons intent on revenging herself against the people who destroyed her life, and she does it with a chillingly cold, systematic ruthlessness that leaves us shivering as we watch. There is nothing to connect us to this character. Or is there? What makes us willing to swim in the cesspool of her head?

First, there's the glamour and suspense. The program opens with a literal bang as we discover Emily's fiance, the son of the people most responsible for falsely imprisoning Emily's beloved father, getting shot during her engagement party. So right off, there's the mystery: who did it? Only then do we get the backstory. Amanda Clarke is idyllically happy with her father in their huge Hamptons home until the society queen he loves conspires with her own husband to lock him up for crimes he didn't commit. Then Amanda herself is locked up as the Grayson's bribe and coerce a series of officials to hide her away in the interests of greed and self-preservation.

So okay, we're sympathetic. Emily lost her father and her childhood. She's lost her fiance. (We're not actually sure that she loves him though.)

We do know, or at least we quickly come to find out, that Emily had a dog and a best friend, Jack, when she was little. Jack is now grown and gorgeous, and the dog is old and still loyal to Emily. More sympathy. Brilliant but predictable.

Except that Jack isn't who Emily is engaged to. Nope, that would be Daniel Grayson. But the writers still use Jack (and the dog) shamelessly to show us why we're supposed to like Emily. Why we should forgive her being cold to Nolan, the one guy who goes out of his way to help her. Why we should ignore her coldly turning down Jack in favor of Daniel. Why we should forgive her for being cold period. Because we don't ever see Emily breaking down, being weak, being traditionally, compensatingly kind.

The writers keep Emily teetering on the edge of likeability in the greyspace between too cold for sympathy and warm enough to make us less fascinated. And they keep us breathless, wondering when the crash is coming. Every week Emily makes one tiny miscalculation after another, out of compassion or arrogance or poor assumption, that leads her deeper into danger. We can't look away.

So what can we learn from Emily?

We learn that you have to give the character something to fight for, something she craves to down to the wormwood of her soul, even if that's nothing more laudable than revenge. If the character needs something desperately enough, we are invested in seeing if she gets it. Conversely, if we make someone else care about the character--even if it is just an old, yellow dog--we can make the character seem more likeable. REVENGE never shows Emily doing anything kind. But because someone else cares for her, and more importantly, at some point, someone else truly cared deeply for her, we care for what she has lost. Loving and being loved make her actions more sympathetic.

What do you think? What would you put into Emily's story to keep her symptathetic? How often would you remind the reader about her motives? How well would her story work if we were reading it as a young adult novel?

How much, in the end, does character likeability matter in the face of a brilliant concept?

Leave a comment and I'll throw in a copy of 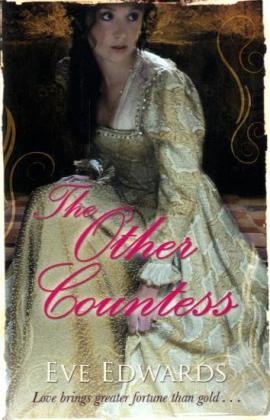 THE OTHER COUNTESS by Eve Edwards.

Here's the book blurb from Goodreads:

It's 1582 and eighteen-year-old Will Lacey's family is in trouble. After years of wasteful spending, his late father has run Lacey Hall to near ruin. Tasked with marrying his family back into fortune, the new Earl of Dorset is all set for a season at court to woo not just the Queen but potential brides with his jousting skills. But when Ellie – a strong-willed girl with nothing to her name but a worthless Spanish title – catches Will's eye, he faces a bigger battle than he could ever have anticipated.

Martina
Martina Boone at 8:48 AM