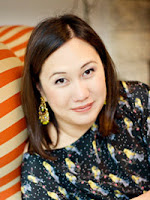 It is our pleasure to be hosting one of THE biggest names in the world of YA - Melissa de la Cruz. Her books have earned spots on the New York Times and USA Today bestsellers lists. She is the author of many critically acclaimed and award-winning novels for teens including The Au Pairs series, the Blue Bloods series, the Ashleys series, the Angels on Sunset Boulevard series and the semi-autobiographical novel Fresh off the Boat. The latest book in her Blue Bloods series, BLOODY VALENTINE, released in December. You can find out more about Melissa and her amazing books on her website or follow her on Twitter.

Social Media Should Be Fun

We have come to a point in our culture where publishers are teaching their authors how to use social media. They ask that newbie authors take a class they offer called "digital bootcamp" so that they can learn how to use Facebook, Twitter, blogs, etc. to sell their books. Apparently I am one of the prime examples of an author using social media to much success. Ha!

This is so funny to me. Mostly because everything I do, especially self-promotion-wise, is based on, "Is this going to be fun?" In fact, most of my life decisions are based on answering that question with a hearty YES! So: I married my husband because he makes me laugh (funniest guy I know), I had a kid because I thought it would be a hoot to raise a rugrat (it's a lot of fun watching a kid grow up), I wanted to be a writer because writing is so much fun for me that my work is play (most of the time, except when it's hard, which is another blog). Most of my friends are really fun. They're witty and sharp and caustic and they drink too much and they used to smoke too much and together we've gotten into a lot of trouble over the years. My friends are the kind of people I can count on to meet me in Vegas for a weekend on a whim, or throw a surprise party, or hire a club DJ for their wedding, or spend the whole day on an East Hampton beach looking for just the right beach umbrella until it's already sundown and we have to leave so that the umbrella ends up used for only an hour (Yes, I'm talking about you Tyler). That might not sound like fun, but the fact that we got to tease him about it the whole weekend—now that was fun.


Life is too short to be a drag. I learned this from my dad, who also told me never to take anything too seriously, especially things you cannot control. For example, I take my work very, very seriously, but the reaction to my work? Not so much. Whether they love it or they hate it, it's all the same really. It was fun for me to write. It's up to other people to decide whether it's fun for them to read, and everyone has their own opinion. When I was younger I could never fall asleep, I was so afraid of everything—would someone say 'hi' to me at school? Would I ever find a boyfriend? I had so much social anxiety it was paralyzing. Now I sleep like a baby. It's not that I don't angst about anything anymore (I do) but I've learned to live without being afraid about life.

So, what's the point of this blog? I guess what I'm trying to say is, if you're an author, and you want to promote your work, social media should be fun. I started a website and I used to blog all the time because it was fun. I liked sharing stories about my life. Back then not too many people read my blog, so I felt like I was writing to the void. Then my books started selling really well, and I started to get too many hits, and I got a little freaked out, because it's not fun for me to share stuff about my life when I know a lot of people are reading about it. Much more fun to think no one did; it allowed me to write freely. I used to allow comments on my blog, until I got too many spammers and also the occasional comment I did not appreciate, so I turned off comments because it wasn't fun anymore.

I have a newsletter, which I send when I feel like it. When I have news to share, and when I remember to send it. When people ask me how often I send it out I lie and say four times a year. In honesty, I don't know. I don't check. I send it out when I feel like it and that's that. I don't like receiving a lot of self-promotional junk, so I try not to send it out too often, or only when I have really good news that people might enjoy hearing about.

My friend Jennie told me to try MySpace because it's fun and all my readers would be on it, so I dutifully put up a MySpace account. It was fun, until they put some kind of odd restriction on the site where people who want to "friend" me have to write my name correctly in the form, and for some reason MySpace had my name as "Melissa De" so no one could find me anymore. It was such a pain that I just kind of let it die, since it was so not fun trying to fix it. Then Jennie said I should join Facebook for the same reason and I resisted because I was so annoyed by the MySpace thing that I still don't have a Facebook.

I joined Twitter on a whim, and I find Twitter really, really fun, so I'm on it a lot. I like @ replying to my readers/followers. And I don't care if people stop following me, or start following me, whatever. I don't tailor what I say to try to "get" more followers. I enjoy it, it's fun, so maybe it sells books, I don't really know. I figure if you're following me you already enjoy the books. Here's something great about the "FUN" rule, anything that is not fun is not allowed, and therefore I feel absolutely no guilt at blocking people who send me rude messages through Twitter. I used to agonize about it, and then I thought, this is making Twitter not fun at all, if I'm feeling anxiety, until I realized I could just use the block function, forget about it and move on, and Twitter has been great since. On another note, I hate when people ask me to follow them, I think it's so presumptuous. I would never ask anyone to follow me. I don't block those that ask, but I don't @ reply to them either.

What I guess I'm trying to say to authors using social media is: do not feel obliged. You have no obligation to do anything except to write a good book. You can share or not share as much of your life as you feel comfortable. If you're not having fun, and you're just in it to shill books, no one will be that interested in you. Think of how YOU would react to someone reminding you over and over again to buy their book. I would immediately un-follow that person. You know? Be reasonable. I try to tell myself this too, and try to keep the self-promotion to a degree that I would be able to stand. Also, it's not really about social media. It's about writing a book. Writing a book is a huge accomplishment and a lot of work, so my rule is, everything else should be fun.
Martina Boone at 6:00 AM