Using Technology for Book Promotion (Plus an Experiment and Contest)

This week, for a change of pace, we are doing a brief series of articles on author marketing in the age of technology with advice and lessons learned from Shannon Delany, Lisa Desrochers, and Myra McEntire. And in honor of the series, we're going to try an experiment in using the Internet to spread the word. To learn more about the contest, go here to pick up your secret code, instructions, and drop off your links for a chance to win books from the authors!

Today, to kick us off, we are thrilled to turn the blog over to Shannon Delany, YA author of 13 TO LIFE, SECRETS AND SHADOWS (out 2/15/11) and BARGAINS AND BETRAYALS (out in August 2011).  You can read her article below, or download the audio file she kindly prepared by clicking here.

Technology and books go together as well as the classic team-up of werewolves and vampires or chocolate and peanut butter. It should be no surprise that marketing is more and more frequently found entwined with technology.

In my case, the marriage of technology and book promotion was a bit more extreme than most. My series started as a serial cell phone novel, joining tech and writing from the get-go. I used the technology available on the internet (to me still a relatively unfamiliar venue in 2008) to write the initial version of 13 to Life. Technology allowed me to post it online in a very public forum at Textnovel.com, to handle readers’ thoughts and to integrate a little public opinion into the story’s structure (via the results of simple polls on my blog).

Putting It All Out There


Being so public about my writing (and so consistent—two brief skeletal sections a day posted: one before most school or work days started, another near standard lunch times) was definitely an advantage. Polls allowed readers and fans to participate and “buy in” to the book as it was being born. They realized their opinion counted (and who doesn’t want that?). And that realization (regardless of the fact we’d never met or personally connected) built a psychological bridge between my work and themselves.

When I won the 2008 Textnovel.com contest the very public nature of my writing opened doors to interviews I probably wouldn’t have gotten any other way as a debut author. CNN.com called (and then didn’t take the story to press for unknown reasons) and the LA Times also interviewed me well before 13 to Life hit stores. I was in The Writer and a publisher and movie producer contacted my agent and me even before query letters went out. Technology was the grease in the cogs of the publishing industry in my case and it made things run faster and smoother because I embraced technology’s potential.

For me, marketing, technology and writing blur together.


I use Twitter ( I’m @shannon_delany and suggest organizing hashtags and hashtag chats), Facebook (I have a page for the current series and a page for myself ), AuthorsDen, RedRoom, GoodReads, AuthorCentral and LibraryThing among others to connect with readers. I do online press releases through free press release sites (people will tell you press releases do you no good, but my publishing contract exists in part just because of a snappy press release which attracted a publisher and producer). Some online venues I use more frequently (and more aptly) than others.

I blog (generally only once a week). I do blog tours that play to my strengths and the interests of my fans. Last year’s “Serial Tour” included serialized snippets of the book, pre-release, which encouraged readers to follow the entire tour. With the release of Secrets and Shadows on February 15, I’m doing the MAX-imum Exposure Blog Tour (starting 2/1). Some participating blogs will have downloadable audio of the interviews they’re doing with Max and Pietr. We’re even arranging a live chat with the Rusakova boys through Mundie Moms. We’ll also be doing a special BTR (blog talk radio) show featuring Max, Pietr and me with Barry Eva at his A Book and A Chat  on February 12 at 11 am EST.

I’m even considering participating in sites like Second Life to tap a different crowd.

I do book trailers (and believe they are a necessity in most cases) and this year we “personalized” them for my favorite stores. I provide free online puzzles for readers and fans. I post snippets from the 13 to Life series online (check out the #13toLife hashtag on Twitter) and occasionally share a snippet from a work-in-progress through #FridayFlash or #3WW (3 Word Wednesday) and Sunday Scribblings. I’ve found sharing bits and pieces can go miles when it comes to whetting the appetites of potential readers and bridging even that six-month space between book releases that makes my fans so itchy.

Where I grew up, there was an expression: “Why buy the cow if the milk’s for free?” I mix that into my strategy regarding technology. I’ll tease readers and potential readers (and it seems I’ve gotten quite a reputation for doing just that), but will I give away the thing they want the most completely and for free?

The newest technology I’m embracing for the good of my series relates to Augmented Reality or AR. Because this technology is so far beyond my ability level (and comprehension), I’m working with Anthony Mincarelli of Digital Reality . “Augmented Reality is the process of using a computer and web-cam, along with patterns called "markers", to display a 2 or 3 dimensional image on a computer screen,” Mincarelli states. It allows us to further blend fact and fiction and deepen (or allow for) a new aspect of the reading experience.

Essentially what happens with AR is you print out (or are provided with) a specially designed AR marker. You go to a designated site, activate your web-cam, hold up the marker and watch it transform into something totally different. Because I like showing more than telling, Anthony designed a fun little bookmark for my readers that I’m launching with this article. 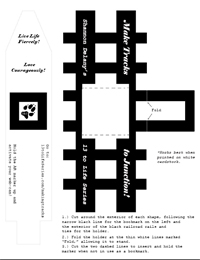 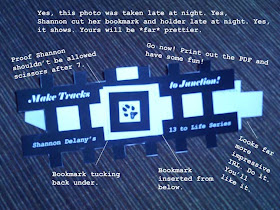 So go ahead, print out and cut out the black and white bookmark and holder shown here, go to the website printed on it, make sure the light in your room is good and your fingers don’t touch the marker or its black frame, activate the camera, show it the marker and just hold still to see what happens. I personally envision huge opportunities to further enrich the reading experience through the use of technology like this (and we have lots more planned with the August 16 release of my third novel, Bargains and Betrayals).

I also Skype with the two guys who will play Pietr and Max at a couple of my events. They are local enough to be involved but far apart enough to need the aid of technology to unite us. And that’s what technology really does—it unites us. It allows for better book “buy in” and connections between authors and fans whether you’ll ever meet in person or not. It allows you to build an audience as you build a book and to bridge the distances created by time and geography.

So embrace technology and you’ll open many doors for yourself and your books.