This week features two intriguing historical fiction books by Jenny Davidson and Esther Friesner, as well as a dystopian mystery by Orson Scott Card. Read on for author insights on their journeys toward publication and be sure to scroll down and enter to win Jenny's new book! 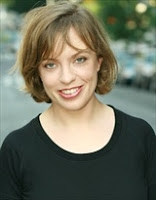 How long did you work on this book?
Well, it's a slightly deceptive question! Let's just say that all books take much, much longer from start to finish than the writer can possibly imagine.... I first started thinking hard about The Explosionist (to which Invisible Things is a sequel) in the summer of 2003. I drafted that novel in the first half of 2004, then rewrote it several times before I ended up with a two-book contract. I was thrilled with that, but it was still tough coming back to write the sequel after several intervening years of life: I guess I wrote the initial draft over the summer and fall of 2008/winter of 2009, then revised it pretty heavily over that winter and spring. I am certainly very happy that it is now seeing the light of day!

How was your journey to publication? Long, short, how many rejections?
I think the hardest thing is finding an agent - they seem to have become the main gatekeepers, so that once one has an agent, it is more likely that the book will find a publisher. The journey to publication is always rough, though - the rejections feel painful, the acceptances come with further obligations and complexities that never feel that easy (but one can't complain without sounding like an utter ingrate!). The hardest thing I ever did in my life was get my first novel published (that was Heredity, which appeared from Soft Skull Press in 2003) - nothing to do with The Explosionist or Invisible Things was quite that harrowing...

What advice would you most like to pass along to other writers?
Be patient! You have to go back to the book again and again to make it right, and sometimes you might even need to move on altogether from a project in which you've invested a great deal - but you'll always take something away in terms of skills and techniques learned. Don't write on the basis of what you think others will want, think about what you really like to read - read a LOT - and listen to the advice others give you. If their attention flags when reading, it's probably not them, it's your job to fix those bits and make the reader really stay with you!

What has surprised you most about becoming a published author?
It doesn't make anything feel that different! But really, no, it is still a thrill - I still remember the huge kick of getting my first ISBN, what an amazing thing!

How long did you work on this book?
Such an ambiguous question. There were long stretches where it was pure play; lots of work happened before I knew that the book was going to be. But I suspect you are asking how much time I spent typing - to which the answer is about 140 hours (averaging five pages an hour), which works out to about 35 writing sessions of 3 to 5 hours each. Toward the end, there were two sessions a day, so in total I'd say four weeks (i.e., 28 work-days). There were days off in the midst of the project, however.

I'm not sure that's a terribly useful number, though. There are projects that I've worked on for decades, if you count "thinking about" as "working." Others practically fly onto the paper the moment I think of them (Enchantment; the Women of Genesis books). All the readers see - or need to see - is the finished product, and the gestation time and the writing time are as unimportant as knowing how many days the actors rehearsed before putting on a play. Either the play is good, or it's not. No excuses, no apologies, no explanations. Ditto with books.

How was your journey to publication? Long, short, how many rejections?
This book existed only as a cool idea (a colony world divided into 19 different regions separated by walls, so that humans could evolve 19 different cultures and have a full range of human history in each) when I sold it to Simon & Schuster as a YA novel. Ironically, I had created the proposal for Scholastic, which had been asking for a sci-fi book for years. But when push came to shove, Scholastic passed on the project, and Simon & Schuster took it. So before I wrote word one, the book was under contract. As I thought about the book, the character of Rigg began to emerge, as also the character of Ram, the pilot who brings the colony ship to the new world. I began to develop reasons for those 19 regions to exist. But it was not until I developed the Expendables in writing the Ram sections that I understood just how the main novel should begin - with the death of Rigg's father. Once I understood that, then the rest of the book flowed pretty smoothly. Even though I was winging a lot of it - that is, constantly revising my outline as better and better stuff came up along the way - and there are major characters who existed in none of my plans, the core idea was absolutely fulfilled. And now I'm writing the next book in the series - you know, the one where I have to start showing some of those 18 OTHER cultures!

What advice would you most like to pass along to other writers?
It depends on which writers you're talking about. For instance, if you're talking about Patrick Rothfuss, then my advice is, Get Me The Sequel To 'The Name of the Wind' or ugly things will start happening to the squirrels in your yard. Similar advice/threats/pleas should be relayed to many other writers whose work I'm following.

Then there are the writers who wrote something wonderful years ago, and now I don't see their name in print anymore. My advice is: Just because you didn't get rich from it doesn't mean you should stop! You were doing wonderful work! Get back to it! Even if we only get a book every ten years, your voice needs to be heard!

But if you're talking about writers who are still struggling to get published, my advice is: 1. If you've been in the same writing workshop for more than a year, quit it at once. You already learned everything you're ever going to learn from those people, and now it's just a support group, social club, or crutch. Settle down and write your novel.

What has surprised you most about becoming a published author?
No withholding of taxes. That was a killer. If there was no such thing as tax withholding, I can promise you, Americans would never stand for this income tax thing. When you actually see it come into your bank account, and then watch vast portions of it go back out again, you'd get really serious about electing Congresspeople who would keep that income tax rate down around ten percent.

Thank you, Jenny Davidson for kindly offering a copy of INVISIBLE THINGS to one lucky reader! Please fill out the form below and leave a comment on this post for a chance to win. The contest is open until midnight on Wednesday the 24th and is open to US residents!