It is with great pleasure that we welcome YA author Clare Dunkle for today's WOW Wednesday. Clare earned her M.L.S. from Indiana University and worked as a university librarian before becoming a writer in 2001. She wrote her first novel, The Hollow Kingdom, for her two teenage daughters to read while they were away at boarding school. Since then, she has written seven YA novels and seen them published through Big Six publishers, and her works have earned starred reviews, honors, and positions on “best books” lists. Her new novel, The House of Dead Maids, a prequel to Emily Brontë’s Wuthering Heights, came out last month from Holt BYR.

This above all; to thine own self be true:
And it must follow, as the Night the Day,
Thou canst not then be false to any man.--Shakespeare

Writing stories means sharing with our readers what we value and admire. In constructing our tales, we respond to elements in earlier stories that have intrigued us, just as we hope that one day future writers will respond to intriguing elements in our stories. In this way, we join the literary conversation that continues down the ages—just as Shakespeare did, when he took the legend of an obscure Icelandic prince and produced from it his brooding, timeless Hamlet.

When I joined the ranks of professional writers, I did so with these ideas in mind. Before I sent out my very first manuscript, I sat down and asked myself why. My answer: to earn the respect of my peers and to inspire the next generation of writers.

These were lofty goals for an unpublished author to articulate. Why should I be concerned about the effect my future books might have? Why should I worry about my responsibility to writers and readers? 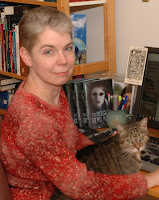 I felt that responsibility from the very beginning because I was privileged to have the best of role models. Lloyd Alexander’s YA books had changed the whole course of my life. I discovered his Prydain series as a depressed fifth-grader, and those wonderful stories taught me to reengage with life. They opened up a path for me and influenced how I saw the world.

When I studied children’s librarianship in college, I learned to appreciate Lloyd Alexander, the writer. He had to work hard to break into publishing: although he decided to become a writer at the age of fifteen, he didn’t publish his first book until he was thirty-one. His books won awards and became classics within his lifetime, but he didn’t earn the income to support a flashy, bestselling-author lifestyle—or perhaps he didn’t want that lifestyle. Instead, he lived quietly in the same house in Drexel Hills, Pennsylvania, for decades, with his wife of sixty-one years, and he volunteered regularly at the local grade school, reading aloud to the children. He answered every letter that came to him at that Drexel Hills address, including two gushing, rambling epics from Yours Truly.

When my first book, The Hollow Kingdom, came out, I dedicated it to Lloyd Alexander. Although he was quite elderly by then, he took the time to answer yet another gushing, rambling epic. What did this living legend choose to highlight in his letter to me about the writer’s life? Did he linger lovingly on his awards or on the thrill of being in bookstores? No, he told me how pleased he was to hear that I was already answering mail from young readers because that, according to Lloyd, was what mattered most.

Lloyd Alexander—may he rest in peace— was the writer I want to be. He wrote stories he cared about for people he cared about, and he helped change children’s literature for the better. But it’s all very well to aim for the respect of librarians and the appreciation of future writers. Now, what does that really mean? How do these goals harmonize with the drive to get published? To produce a bestseller? To be the next big thing?

In some ways, they match up well. It’s my experience that editors and agents want to read a fresh voice with a new perspective on the genre. An editor plucked that very first manuscript of mine out of the slush pile, and we wound up winning the Mythopoeic Award. This success led me to my agent, who was happy to represent an author with that kind of credential. She in turn upped my advances to the point that I earn a comfortable living from my books, so I can’t say I’ve had to suffer for my art.

But at the same time, my goals have sometimes put me into conflict with my editors. My current book, The House of Dead Maids, is a case in point. My agent sold that manuscript in 2006 to an editor who, in my opinion, wanted to make it less unique and more palatable to readers. (She told me later that she was under tremendous pressure to produce bestsellers.) I felt that this approach would ruin the book’s usefulness as a “bridge” book to Emily Brontë’s Wuthering Heights, which is what I wanted it to be. So I had my agent buy back the book from that publishing house and take it to a house that would honor my goals for it.

That was a stressful time! I would lie awake nights calculating just what would happen if I had to buy that manuscript back with my own money. But Holt snapped it up and understood at once my vision for it. And I don’t usually get sentimental about my books, but this one is so perfect that I cried when I held the first copy in my hands.

Last week, I learned that The House of Dead Maids has earned a star from The Horn Book, the oldest and most prestigious American journal of children’s literature. Their review (which runs in the Nov./Dec. issue) calls my book “a worthy companion to its classic literary inspiration.” On the same day, Brontëblog called The House of Dead Maids “a book that makes no concessions. And it is this cultivation of excellence and coherence that is the ultimate reason of its success.”

That day was, hands down, the highlight of my publishing career. I remembered my painful decision to put on the brakes and pull the manuscript from its original publisher. I thought about my instinct to protect what was unique about it even if that would mean a reduction in sales. The risky journey had culminated in this astoundingly high praise from two sources I respected and admired. I glowed; I reread the reviews about a dozen times each; and then I went out and bought champagne.

“You see, we’ll never get a bestseller out of her,” my husband mourned quietly to my daughter.

“I know,” she said. “What we need is Justin Bieber tweeting, ‘chillin on plane readin HOUSE OF DEAD MAIDS–its CRAZY good!!’ What we’ve got is Brontëblog.”

And I’m just fine with that.

Thanks so much, Clare! And now, for a surprise... 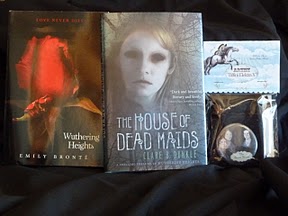 One Grand Prize winner will receive The House of Dead Maids, a gorgeous Brontë sisters pocket mirror, and the HarperTeen edition of Wuthering Heights! Two lucky runners-up will receive the two books. To enter, send an email to DeadMaidsBook@gmail.com with your name, email address, and shipping address (if you're under 13, submit a parent's name and email address). One entry per person and prizes will only be shipped to US or Canadian addresses. Entries must be received by midnight (PDT) on October 31. Winners will be selected in a random drawing on November 1 and notified via email.

Clare's book THE HOUSE OF DEAD MAIDS is now available! Thanks so much Clare for stopping by on your blog tour and sharing your insights on writing. Thank you for the generous giveaway opportunity!
Happy reading and joyous writing!
Martina & Marissa
Martina Boone at 6:00 AM