This week features several new books that are part of a series. YALit.com has helped us track down these terrific reads. We hope you discover something that will catch your reader's eye. Be sure and scroll all the way down to enter to win the giveaways!

How long did you work on this book?
My notes show that I put together my initial ideas for Warrior Princess: The Emerald Flame in October 2008 and that I had come up with a full storyline by January 2009. Because my books are written on commission – meaning I get an advance from a Publisher before I start writing, I had to get the synopsis agreed both in the UK and in the US. This obviously happened quickly, because I had finished the first draft of the book by the end of April 2009. I would imagine the actual writing took me nine or ten weeks. Then the book went off to be edited in the UK. I had finished the UK edit by end of May 2009, at which point the book went to Harper Collins in New York for the 2nd edit. I had responded to the American edits by August 2009, and the final version of the book was ready by September 2009.

How was your journey to publication? Long, short, how many rejections?
Pretty long, I’d say! If I remember correctly, I wrote my first full-length story when I was about 14 or 15. I wrote a couple more over the next few years then wrote a Sword and Sorcery book-length story and sent it off to a publisher. It was rejected politely. I carried on writing, mostly fantasy stuff, but I didn’t bother sending anything else off for some time, largely because fantasy wasn’t very popular with publishers around that time – I just wrote because I enjoyed it. About ten or so unpublished books down the line, I decided to try for publication again – mostly to prove to family and friends that all the hours spent locked away in my bedroom were not a total waste of time!

A few more years and books passed, but I was now paying attention to what publishers were telling me and adapting my writing to fit with their criticisms and comments. I was about 30 when I found a Literary Agent who liked my stuff. It took a couple of years to get my first book published – that was in 1987, and 6 publishers had turned it down when the 7th came along and liked it. More published books followed. I carried on writing in the evening and working during the day till 1992, when I went full time as a writer – which I have been ever since.

What advice would you most like to pass along to other writers?
Write first of all for your own pleasure – don’t start off by writing to be published – that can come later. Read a lot – writing is a craft and it has to be learned, and the best way to learn is to read books by good writers – a lot of different good writers.

If you do want to be published, then you must listen to and try to take the advice given to you by publishers and literary agents. You are entering a very difficult marketplace, and you will need all the help you can get.

If you love to write, then don’t stop – don’t give up. Accept that rejections are all part of the game – just keep working and working and learning and learning. There will never be a moment when you can say: “Now I know how to write!” It is a constant learning curve.

A good idea badly written will be of more interest to publishers than a bad idea written brilliantly. For a publisher, the writing can always be improved in the edit, but a bad idea stays a bad idea whatever you do to it. Work on having good ideas!

What has surprised you most about becoming a published author?
I’m not sure anything has really surprised me, except for that nagging feeling that many of us have that it’s all been a big mistake and we’ll be FOUND OUT!

That being said, it is in a way a little surprising that I have managed to make a living from doing something I love for the past 20 years! How many people can say that? I was also pleasantly surprised when Fantasy came back into favour a few years ago – largely thanks to Harry Potter, I think. That opened the door for a lot of us to get our Fantasy ideas out there.

It is also a constant delightful surprise to me when I get mail from people telling me how much my books mean to them and that I’m their favourite writer. Me? Your favourite writer? Really? Wow! 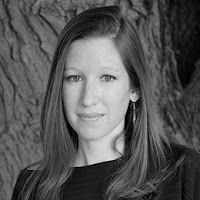 How long do the books take you to write?
Because Luce’s story is so emotional and so intense, I like to “go there” with her and stay inside her head without coming up for too much air. I write fast and furious every day for about two months to get out a first draft. Then I take a break and usually go back for another month or two of heavy revision.

Do you have any advice for aspiring writers?
I've been writing stories since I was in middle school, so I love talking to people who are interesting in writing. One question I get often has to do with what to do when you get stuck, and the clearest advice I can give about that would be to look at the scene from a different angle and write through it. Say I'm trying to write a scene about two people having an argument at sunset and can't figure out how to make it interesting or fresh. Sometimes, when it takes me a while to get warmed up, I'll imagine how someone else--my husband, my best friend, someone I recently argued with--might see the same sunset. What would they notice about it that I wouldn't, or vice versa? Write a whole paragraph about the sunset instead of just a sentence. Then go back and look at what is strongest image you came up with. Which image reflects something new about your characters? Save that image, cut the rest. Eventually, those strong images will pop out first in your mind.

To those of you who are working on a novel or have finished one and are sending out your work: stick with it! I don’t think you can ever be too young (or too old!) to start sending out your work. In addition to Fallen, I have another novel I have been working on for eight years now and I know that someday I’m going to finish it! I couldn’t even begin to count how many rejection letters I’ve received over the years from agents, publishers, editors, and contest judges. What kept me writing was the support of other friends who are writers—and a dogged determination to someday get my writing published. There were times when I never thought it would happen, but now I’m so glad I kept writing. Find a writing-buddy, share your work, revise it over and over again, read it aloud, stay true to yourself and your voice, and don’t give up. An English or a Writing program are great ways to read widely and meet other writers. You can get a lot of great practice writing and revising in an academic program but I wouldn’t say the degrees you earn are necessary. If you’re looking for an agent, Writers Marketplace (the book) is a great place to start. There are also tons of publishing blogs out there with suggestions for agents. It’s mostly about finding someone whose tastes and sensibilities match yours.

We've got two juicy giveaways this week. Enter to win MISGUIDED ANGEL by Melissa de la Cruz and THE EMERALD FLAME by Frewin Jones. You must leave a comment and be a follower of our blog to enter. Be sure to fill out the form below. The contest is open to US residents only and will close at midnight EST on October 27, 2010. Winners will be announced on Thursday!